Despite rising geopolitical tensions, there was no corresponding rise in negative sentiment in the most recent survey period. That does not mean there were no changes in sentiment trends; only that shifts were mostly slight. Perhaps it is important to put quiet times in perspective, however. Just as an ocean’s tidal shift can occur almost imperceptibly, the power behind the change can be immense. 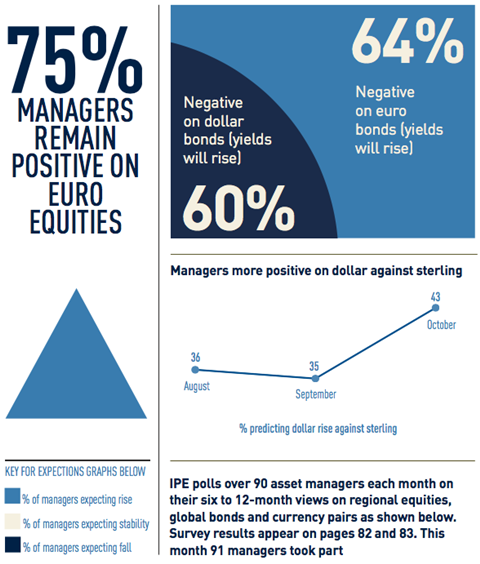 A 15-month downtrend of expectations that euro-denominated bond prices would fall (yields would rise) appears to have slackened somewhat with a fourth consecutive floor in that negative sentiment. Expectations for US-dollar bond prices to fall have also declined slightly for four consecutive months. Elsewhere, sterling bond price sentiment is rebounding more sharply, while Japanese bond price sentiment continues to bounce along a generally unchanged, albeit negative range. In comparison with the survey results for equities, the slow but growing anticipation for continuing lower yields from managers is interesting.

Positive sentiment towards euro-zone equities has levelled off. Positive expectations for Japanese equity markets have also levelled off, and the (albeit short-lived) positive expectations for UK equity markets to rise have disappeared. However, sentiment in favour of rising US markets, which had repeated its pre-Trump freefall six months ago, stopped in the most recent period. It is worth noting that managers are least enthusiastic toward rising US equities compared with other markets, with the exception of UK markets.

There was one notable, dramatic move in sentiment in the most recent period. Managers have reduced negative and stable expectations in favour of rising expectations that the dollar would strengthen versus sterling. This is a meaningful shift as sentiment towards stability between the pair rose over the past three months and in other pairs, expectations of dollar strength continued to weaken.