AQR's Lasse Pedersen calls for honesty about ESG and returns

Proponents of ESG investing who insist it can only be a force for good for the world and portfolios are not telling the truth and hurt rather than help their case, according to Lasse Pedersen, financial economist and principal at quantitative asset manager AQR.

Pedersen spoke at an AQR conference in London, where he presented a paper showing that a responsible investor’s decision about the costs and benefits of incorporating environmental, social and corporate governance (ESG) views in their portfolio can be conceptualised by an “ESG-efficient frontier”.

Responding to a question from a delegate, Pedersen, who is also a finance professor at Copenhagen Business School and NYU Stern, said: “Insisting on something that is beyond what makes economic sense and what empirical data supports actually hurts your case, because it’s not true.”

“I think people know in their hearts that ESG is not always good for returns,” he added.

ESG constraints could reduce the Sharpe ratio – a measure of risk-adjusted performance – when the investor had another objective, but some ESG information could be good for returns. 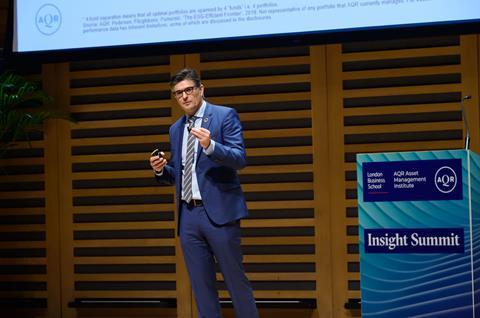 “I think being honest about the costs and benefits is the way to win the debate and promote ESG investing,” he said.

Pedersen had been asked how AQR had come to “revisit” ideas expressed by its founder Cliff Asness a couple of years ago, when, in the delegate’s words, “Cliff was getting a lot of publicity for work saying ESG may be good for the world but it’s bad for your portfolio”.

Pedersen rejected the implied claim that AQR had changed its mind about ESG, saying it was “a bit of a caricature” to describe Asnesss’s argument in that way.

Pedersen explained: “Our view is that if you want to integrate ESG by having a more constrained portfolio than the optimal portfolio then it is true that more constraints should theoretically be reducing your returns.”

“It is also true that if the market is fully efficient and many people are ESG-motivated, then eventually that should lower returns, so we’re still saying Cliff’s point is true.”

This did not mean that being ESG-motivated was the wrong thing to do, Pedersen hastened to add.

“It’s important to remember that if you get to this case, then we are in a situation where because investors are ESG-motivated, they accept a lower return for these very sustainable firms.

“This means sustainable firms have a lower cost of capital so good things can happen for the world.”

It was also true that some ESG information is return-enhancing, and AQR had been trading on some of those return-enhancing ESG signals for more than a decade, said Pedersen.

“ESG-motivated” is one of three types of investors considered in the model Pedersen presented at the conference, with the other two being “ESG-unaware” and “ESG-aware”.

Coming back to Asness’s comments, Pedersen suggested the founder had been reacting to some proponents of ESG mis-representing it as something that “is wonderful for the world and always maximises your return and Sharpe ratio”.

The real world is more complex, Pedersen said in a clarifying comment for IPE.

In an on-stage interview later at the conference, which was a joint event with London Business School, Asness said the article he had written two years ago included what he had thought was a very “pro-ESG” argument.

He told delegates that in the piece – Virtue is its Own Reward: Or, One Man’s Ceiling is Another Man’s Floor, published in May 2017 – he was trying to explain how investors help change the world when they refuse to own certain companies.

“Well, it’s geek stuff, it’s always geek stuff in the end,” he said at the conference. “You want the discount rate for the projects and people doing the bad things to be higher.”

To do that, however, he argued on stage and in the article, meant getting someone else to own that company by paying them through a higher expected return, i.e. a lower price.

A higher expected return for companies deemed harmful was “actually good news for you if you want to change the world because it means the companies will do less evil,” Asness said.

“I was a little surprised by some of the reactions to my very-pro ESG argument, I admit”

“If you haven’t changed their expected return you have not changed whether they are going to pursue the same stuff,” he continued. “I was a little surprised by some of the reactions to my very-pro ESG argument, I admit. I saw this as explaining why you’re doing good and how.”

According to a survey carried out for NN Investment Partners earlier this year, 52% of professional investors (290) believe that incorporating ESG factors into their investment strategies will limit their overall returns, although the surveyed investors were also willing to sacrifice returns to support ESG or responsible investing goals. On average, investors said they were prepared to forgo 2.4% a year if it meant their investments had a positive, non-financial, impact.

An experiment carried out in the US by the University of Cambridge Institute for Sustainability Leadership found that when given certain information consumers were willing to give up returns of up to 2-3% to put their money into sustainable investments.