Letter from Australia: In need of a broader asset pool

The World Bank places Australia at thirteenth position in its ranking of global listed equity markets, meaning the ASX is becoming a pond that  is too small for what is now the world’s fourth-largest pension savings system.

This capital mismatch is causing political leaders across party lines to express growing concern over the implications, including the concentration of ownership of the Australian economy among too few entities.

Liberal House of Representatives member Tim Wilson – who launched a parliamentary hearing into capital concentration and common ownership in September before his promotion to assistant minister – says an inquiry is urgently needed.

“There is already a high concentration of ownership of ASX-listed companies by an increasingly small number of mega [super] funds, and that trajectory will increase,” he says.

“We don’t want a stock exchange where a handful of mega funds make all the decisions, ordinary investors are locked out, and higher costs are paid by Australians.”

Wilson’s successor as chair of the House of Representatives’ standing committee on economics, Liberal politician Jason Falinski, tells IPE: “There is little doubt that this is a problem, but what we don’t know is just how big.” 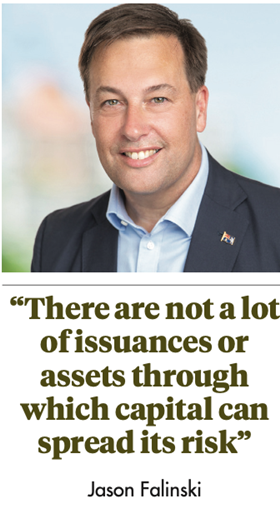 Over the past two months, a procession of regulators, including the Australian Competition & Consumer Commission (ACCC), the Australian Prudential Regulation Authority (APRA), the central bank, Australia’s largest banks, superannuation funds and global index fund giants BlackRock, Vanguard and KKR, have been called before the committee.

The impact of over-regulation by the Australian Securities and Investment Commission (ASIC) is effectively limiting the growth of the Australian capital market, Falinski believes. He accuses ASIC of making it “incredibly difficult” for foreign companies and entities to raise money there.

“This means that this giant pool of capital in Australia has very limited assets to choose from. There are not a lot of issuances or assets through which capital can spread its risk.”

Growth of the superannuation system is concentrating more capital in fewer entities, and that capital is also becoming politicised, says Falinski.

“Our aim was to look at the impact on consumers,” he tells IPE.

Leigh and his co-author, Adam Triggs, an academic from the Australian National University, found that among the firms where they could identify at least one owner, 31% share a substantial owner with a rival company.

They also write that, across the Australian economy, common ownership increases effective market concentration by 21%.

Leigh says the early findings raise concerns of a level of common ownership that could lead to a dampening effect on competition. “When the same investors own competing firms, the incentive for those firms to compete might be muted.”

Falinski also points to the area of corporate governance advice. He says: “Another thing that we are very concerned about is the role of proxy advisers, particularly where superannuation funds co-own the proxy adviser and hand over their voting shares to the adviser who votes on their behalf.”

Australian super funds own the Australian Council of Superannuation Investors (ACSI) which, among other things, provides proxy services.

Louise Davidson, ACSI’s CEO, says that although ACSI provides voting recommendations that are “informed by our research and engagement programmes”, members ultimately decide their own voting intentions.

At the competition authority, ACCC chair Rod Sims accepts that the ownership of Australian-listed companies will become increasingly concentrated in coming years, and that there will be increasing levels of common ownership of competing companies.

He notes that the strong growth of the fund management sector over the past decade has led to a rising level of ownership of Australian publicly listed companies by domestic institutional investors.

As of 31 March, these investors were estimated to own just over half the value of Australian-listed equities, with foreign ownership calculated at around one-third, and Australian households directly owning about 11%.

APRA-regulated superannuation funds owned A$467bn in Australian shares as of end-March 2021. Their holdings represent about 20% of the market capitalisation of all ASX-listed companies, according to the ACCC.

In the superannuation sector, this increase in concentration is the result of a shift in recent years by super funds to manage more of their investments in-house, and by mergers between super funds.

ACSI’s Davidson downplays the role of superannuation capital. “ACSI members invest independently across the ASX,” she says. “Their investments fluctuate greatly, but on aggregate they hold about 10% of ASX-listed companies.”

The outgoing chief executive officer of AustralianSuper, Ian Silk, told the parliamentary hearing in September that AustralianSuper currently has about A$53bn invested in listed domestic equities.

“We have reviewed our shareholdings and can advise the committee that we cannot identify any instances of common ownership,” he said.

Wayne Byres, APRA’s chair, told the hearings that the current legislative framework had been designed to control stakes within an individual entity, not common shareholdings across entities. While not evident today, common ownership is a likely future outcome.

Leigh does not believe there is a need for more regulation, but he says regulators such as the ACCC should be monitoring common ownership more closely.

Falinski acknowledges that the twin issues of capital concentration and common ownership “are really pushing the bounds of our legislative understanding of what competition policy looks like, and why competition is important to any economy”.

The committee will issue a report on its hearings in November.

Unless addressed, capital concentration and common ownership will lead the country down the path of a managed economy, Falinski says.

“History has shown us that managed economies hurt everyone, but mostly they hurt ordinary people.”