• Central banks retain a dovish stance in the face of low inflation.
• The UK could re-earn its old soubriquet as the sick man of Europe.

With such a notable lack of inflation throughout developed markets, the world’s seemingly synchronised – and surely welcome – economic growth spurt is not really reflationary in the classic sense. The absence of inflation has, however, triggered a clear change in the global monetary policy narrative. Central bankers have been lining up to suggest that missing inflation targets should perhaps no longer be perceived as a failure, and that more patience is required in the journey towards higher inflation.

Risk markets have wrestled with this seemingly hawkish change in monetary stance, and taken on board that low inflation will not now trigger more easing. Instead the markets seem to be assuming that central banks will maintain a suitably dovish stance while risk markets have carried on rising and volatility measures have edged even lower. This is a Goldilocks world for risk.

Politics across the world continue to exert a significant influence on financial markets – elections in Europe, the nineteenth National Congress of the Chinese Communist Party this autumn, turmoil in Venezuela and the many surprises emanating from the White House. There is also the seemingly perennial US debt ceiling ‘problem’. Currently everyone is hoping there will be a smooth suspension of the debt ceiling, possibly during late September, but there is a chance, as ever, of wobbles along the way.

Geopolitics in its many guises is certainly on the risk radar of investors. North Korea’s actions have shocked the rest of the world. With a US president who has shown himself to be mercurial and rather impulsive, there is a threat of further escalation of this showdown.

For bond investors, there remains a sense of unease over the sustainability of ultra-low yields. Even with absolute yields so low, especially for government bonds, there have been large flows into bond funds as well as equity funds, particularly in the US. This puzzlingly bullish take on bonds might be partly explained by the fact that with equity markets booming, investors are forced into buying bonds to maintain asset weightings.

As plausible as this reason sounds, it does little to ease the fear that too many investors own too many bonds. Where will the bottlenecks be if there is a run for the exit? The Bank of England (BoE) has carried out research into the resilience of the European investment-grade corporate bond market when faced with significant redemptions from open-ended investment funds.1

The BoE report highlights the tail risks posed by significant outflows, and concludes that the market’s breaking point – where price dislocations are triggered as opposed to smooth price declines – arises when initial redemptions reach about 1.3% of total net assets. They note that this figure is 1.3 times the level of redemptions observed in October 2008. And no one needs to be reminded of the destruction caused to investor confidence when market liquidity seizes up.

Returning to more likely scenarios, the prospect for hiking by the US Federal Reserve appears to have moved back to December, although there seems to be a consensus that it will announce balance sheet normalisation plans in September.

The combination of a better euro-zone growth outlook and the hope of a more stable EU following Emmanuel Macron’s election as French President are proving to be of great support to the euro.

For the dollar, however, there seems to be a growing list of reasons to be bearish. As well as some disappointing economic data, political events in the US have also had a significant impact in triggering dollar weakness.

The failure of the Trump administration so far to keep its campaign promise to reform healthcare encapsulates the fear that there will be little progress on other key election promises, such as tax reform or deregulation.

“The failure of the Trump administration so far to keep its campaign promise to reform healthcare encapsulates the fear that there will be little progress on other key election promises, such as tax reform or deregulation”

There are also perhaps more structural forces at work, which may help explain the dollar’s propensity to weaken.

Reserve managers began increasing their relative dollar allocations during the 30-month period when the dollar appreciated the most, from mid-2014 to end 2016. Some observers now suggest that this period – which reversed a 10-year trend of diversification out of the dollar – may itself come to an end as stresses in the euro-zone have abated and a move to broaden allocations away from the dollar recommences.

China’s central bank acknowledges that, despite some success in its deleveraging plans, the economy’s overall debt levels are high. Possibly in response to setbacks and renminbi frights that occurred during plans to liberalise the capital account, and the subsequent re-introduction of some capital controls, the authorities have changed their approach and are focusing on opening domestic capital markets to foreign participation.

Some observers argue that reforming and opening China’s domestic financial markets ought to have been a higher priority than opening the capital account, which left the system potentially exposed to large outflows with little opportunity for balancing inflows.

International participation ought to aid the development of a more sophisticated financial market, and it might not be too many years before renminbi allocations will be increased across global portfolios to more accurately reflect the huge underlying market size.

1 Financial Stability Paper No. 42 – July 2017, Simulating Stress Across the Financial System: The Resilience of Corporate Bond Markets and the Role of Investment Funds

The UK: sick man of Europe?

Half a century ago Britain’s economy languished as the sick man of Europe. In the intervening years, Britain picked herself up while other European economies gained and lost that particular soubriquet. But it could soon be the UK’s turn again.

The 2016 Brexit vote revealed the depth of the schism in the UK. Whereas London and the south-east of England have generally reaped the benefits from the City’s success as a financial centre, and from a booming service sector since the 1990s, those benefits have failed to spread to many parts of the UK. 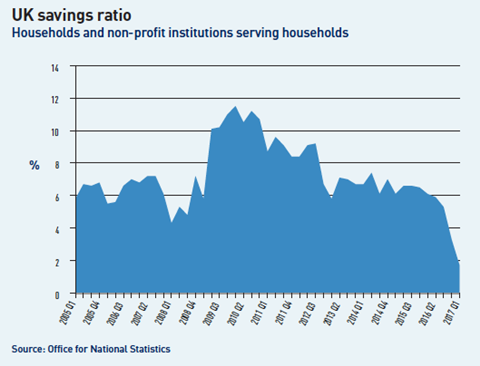 In the rapidly changing political environment, a left-wing Labour party is rising from the ashes of its disastrous 2015 election. The Conservative government, torn between its Brexit leave and remain factions, is struggling to assert itself and present a more measured approach to the Brexit negotiation.

Although the UK’s summer inflation figure came in surprisingly low, there are many who suspect Britain, often susceptible to bouts of high inflation, could experience its return. The household savings ratio is down at a historical low of 1.7% of disposable income and forecasters argue that already squeezed and indebted consumers will not be able to support the economy.

With economic growth in continental Europe recovering across the board, the UK is falling down the league table.

However, as the euro continues to appreciate, it could become a significant headwind.

The UK might benefit if sterling weakens further, although it remains to be seen whether inflation will stay low or if the UK bucks the global trend and starts, as in the old days, to have a high inflation problem.