Summer doldrums have a tendency to mark their arrival with volatility. This year trade tensions, particularly between the US and China, and fears of escalation are flustering shallow, and less liquid, financial markets. Nearly all the volatility, manifested in the foreign exchange markets, is linked to US policy. And with US mid-term elections in November, US politics will maintain the financial markets’ attention.

The Chinese currency has been weakening over recent months heading to its lowest levels versus the dollar and against the China Foreign Exchange Trade System (CFETS) trade-weighted currency basket. To date, Chinese capital flows, gauged by higher frequency portfolio flow data, have been supportive with both equity and bond markets benefitting from inflows in 2018.

At this juncture, markets watch nervously for what Chinese policymakers might do to manage expectations and ease downward currency  pressures. While elsewhere in the world worries abound that troubles in some of the ‘smaller’ currencies, perhaps the Turkish lira have the potential for contagion.

The US economy has continued to produce healthy data, despite the threat of a trade war. The Federal Open Market Committee was upbeat in its July appraisal, and bolstered the view of one hike in September followed by another before the end of the year, affirmations which re-engage curve flattening, and reassure the stock market that US equity outperformance is still justified, even with stretched valuations. 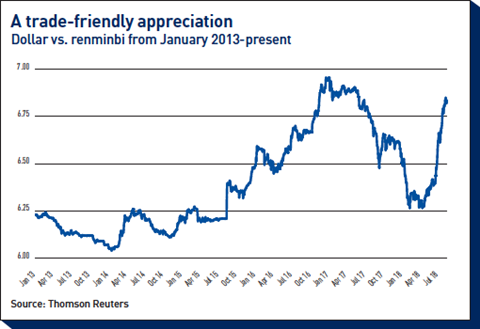 Perhaps the July doldrums did exacerbate the moves, but global bond markets were swept away by speculation that the Bank of Japan (BoJ) was considering changes to its Yield Curve Control (YCC) policy. The Japan Government Bond (JGB) market was volatile as the JGB curve steepened, on speculation the upper limit on the 10-year bond was to be raised.

After ‘clarification’ from Governor Haruhiko Kuroda, there is debate as to what was the intention of the bank in changing the YCC policy. There is also a discussion over whether the changes might trigger significant rate moves in the rest of the world. With the BoJ acknowledging that it may take longer for inflation to reach its target, on balance it was hard to read too much hawkishness. However, it did convey a form of forward guidance, preparing the way to edge closer to policy normalisation.

The anchoring of JGB yields has weighing down on rates globally. That Japan’s accommodative monetary policy might be tightening is a reminder that global liquidity will be shrinking. In that case, the dependence of the financial markets on easy money will have to be addressed.

As feared, Italian politics remains in the limelight with budget negotiations the cause of tensions. Although there have been declarations of Italy’s commitment to the EU from ministers, others convey a different stance, and seem to question the need of Italy’s 2019 budget to adhere to EU fiscal rules. This is the source of much tension, and of the sharp rise in the spread between German Bunds and Italian government debt (BTPs) .

The weakness in the renminbi is provoking much debate, particularly as trade tensions remain acute. Currency bears see a possibility, as confidence is so delicately balanced, that the renminbi may be vulnerable to sustained selling. They point out that, should the trade war escalate, further damaging Chinese economic activity, this may knock confidence in the authorities’ abilities to maintain economic momentum.

On the other side, there are those arguing that this bout of weakness represents a buying opportunity. In this view, policymakers have been successful in securing continued steady economic growth through fiscal and credit stimuli. It follows, that the renminbi will continue its broad appreciation against the dollar. This is the official line too, with spokespeople denying that a depreciating currency (to help boost exports) is a deliberate part of economic policy.

This year’s collapse in the interest rate differential between the US and China, from about 300bps to the present near-zero spread, has made it easier to short the renminbi. However, were the authorities to increase interest rates in an attempt to bolster the currency, this could endanger efforts to support the economy.

So much of the rest of the trading world depends upon China’s economic strength and direction that the stability of the renminbi is vital. The sell-offs in both the Russian rouble and the Turkish lira reflect a general risk-off dynamic, and provide insight to market nerves. Should US-China trade tensions intensify further, or if the renminbi’s depreciation speeds up, then it is not hard to envisage already wary markets being hit hard.

The UK’s parliamentary summer recess has permitted some down time from the constant stream of Brexit headlines in the UK press. The lull is temporary, however, and September will see a resumption of hostilities, and a busy few months of negotiations for Prime Minister Theresa May both with the EU and within her fractious and divided Conservative Party.

The UK Labour and Conservative parties both hold their annual conferences in September. And in between a variety of European domestic elections this autumn, key dates for the negotiations are the EU Council meetings in September, October and December. If the Sweden Democrats, which supports a referendum on leaving the EU, does well in the Swedish general election, it could ignite a political bonfire.

There do seem to be several, arguably sanguine, consensus views within markets. One is that chances of a Brexit ‘no deal’ are lower than for the other possible outcomes. Another view is that whatever the deal, Brexit is a domestic issue for UK politicians and assets. There is a faith in the ECB (and its ‘whatever it takes’ mantra) and its ability to head off a prospective European financial crisis.

After midnight CET on 29 March 2019, when the UK is scheduled to leave, the negotiating looks set to be over. The consensus may be right in assuming that it will only be UK assets that need to reprice over these coming months. However, if it is ‘no deal’, although it is unlikely, a flight-to quality could be triggered that would spread rapidly across the Channel and at least throughout the rest of Europe.