The Belgian pension portal mypension.be is expanding, the country’s pensions minister has announced.

From now on, users will be able to consult the website to find out the estimated amount of their state pension.

From March next year they will also be able to use the website to calculate the impact of new rules allowing people to buy back years spent studying to count for their pensionable service.

The mypension.be platform will also evolve to allow individuals to check the effect certain career choices would have on their pension. This feature is to become available from 2019.

The online service was introduced in January 2016. Initially it allowed users to consult their career data and find out when they could claim their pension. Since December 2016 those accruing occupational pension rights have been able to look up the second pillar entitlements they had built up.

The equivalent is now possible for the unfunded state pension.

Steven Janssen, managing director of Sigedis, which is responsible for the second pillar part of mypension.be, said the evolution of the state pension functionality on the site had encountered issues relating to pre-2016 reform that introduced changes to the state pension age.

“It introduced an element of individualisation so there was a fair amount of confusion among the populace,” he told IPE. “As a result it was decided to focus our efforts on the pension age.”

Also, changes to how the state pension was calculated were being introduced at the time, so those behind mypension.be decided it was not worth trying to model something that could soon be redundant.

Announcing the fresh changes, the Belgian pensions minister Daniel Bacquelaine said: “Until recently, citizens were often unaware of the reality of their pension rights and had to turn to different services depending on their professional status. The implementation of the pension engine has significantly improved a citizen’s digital information about pension rights, regardless of the occupational scheme to which he is affiliated.”

He noted that the mypension.be platform had been visited more than 6.7m times as of 20 November. The federal pensions service today announced there had been almost 500,000 unique visits to the website since the changes were announced less than a week ago.

The mypension.be website is the outcome of collaboration between several federal pension organisations and Sigedis. Sigedis is a non-profit organisation created in 2006 by the Belgian government to collect declarations from all second pillar pension providers for the purpose of maintaining an occupational pensions database.

The database, DB2P, became operational in January 2011. It is the data engine behind the mypension.be portal and other outputs, such as pension institutions’ individual benefit statements and letters to pensioners (see below for a workflow depiction).

More than 200 providers declare information to the database. An English-language domain name was chosen to avoid having to register domains in all three of Belgium’s official languages (Flemish, French and German). 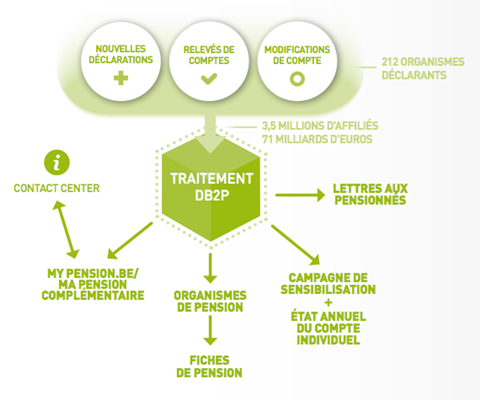 In other news, Belgium’s larger house of parliament has voted to allow those who work for longer than 45 years to accrue additional pension rights. At the moment, workers can only accrue a maximum of 45 years’ worth of pension rights.

The reform will take effect from January and follows through with a recommendation of the Pension Reform Commission 2020-2040, a panel of experts appointed in 2013 by the then government.

Bacquelaine said: “Our pension system must encourage the pursuit of professional activity but must also better reward the work done. From now on, all years of actual work will be taken into account in calculating pensions.”