For football-crazy Brazilians things could hardly look worse after the ‘Seleção’ was thrashed 7-1 by Germany at home in the World Cup finals. If only they knew how happy those days would seem later. Since that fateful afternoon in July 2014, the Brazilian economy has been trapped in a downward spiral, turning a market that was flying high during most of the global financial crisis into the clearest example of the fall from grace of the largest emerging economies.

Several brave investors, however, continue to see potential in a 200m-strong market that has surfaced from worse situations in the past. French-American cosmetics group Coty provided one recent example of faith in Brazil when it spent $1bn (€950m) to purchase a smaller rival in the country. Is it time to start looking for bargains in Brazil’s equity markets too?

For many investors, valuations might look interesting. IBOVESPA the country’s main stock market index has taken a severe hit in the past few years. In 2011, the index reached a peak of more 70,000 points; nowadays it can barely scrape 50,000. So it would not be unreasonable for investors to seek interesting deals in the Brazilian market. To find value, however, it is necessary to look into Brazil’s current economic slump and try to find signs of hope. At present, the economic situation looks dire.

A combination of an unfavourable global environment with ill-timed heterodox policies implemented by the government means that Brazil’s inflation is on the rise, even though the economy is contracting. Excessive spending by the government is one of the main drivers of the crisis. In the past 12 years it has thrown money at the expansion of social programmes and subsidies to economic sectors as if it was a Gulf state monarchy. The discovery of huge offshore oil reserves, coupled with what seemed to be China’s unquenchable thirst for many of Brazil’s commodities, made such public spending look reasonable.

In the second half of 2014, however, economic reality started to bite. The Chinese economy slowed down and so did the prices of most of those commodities that spurred public investments in Brazil. The price of oil slumped, making the exploitation of the new reserves uneconomic at the same time that a mammoth political and corruption scandal engulfed Petrobras the state-owned oil giant.

Prior to presidential elections in the second half of 2014, the government used accounting gimmicks to hide holes in public finances, enabling President Dilma Rousseff to be re-elected. By the time her new mandate started, the president was forced to push forward tough austerity measures that, even though hardly implemented due to opposition by Congress, have further depressed the economy.

The result was calamitous. By mid-November the local currency, the real, fell 40% against the dollar. This happened after it had recovered slightly from its mid-September low when the depreciation reached more than 50%. Inflation hovered dangerously around 10% a year and unemployment was at about 8%. A growing number of economists expect Brazil to post two straight years of recession – a state of affairs not recorded since the early 1930s.

The most pessimistic forecasts suggest the economy will shrink by more than 3% both this year and the next. To make matters worse, Standard & Poor’s has downgraded Brazil sovereign ratings from investment grade to junk status. “The situation will get worse before it starts improving,” warns Mailson da Nóbrega, a consultant  and former finance minister. 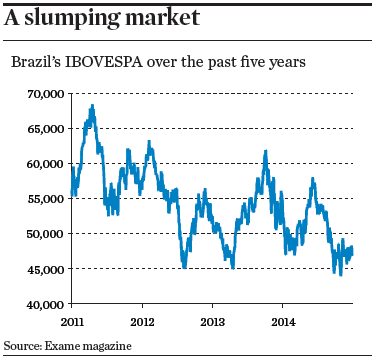 So why would anyone invest in such place? The answer lies in Brazil’s much-vaunted potential. It is, after all, a huge market which hosts a number of competitive global companies and several interesting business sectors. Experience shows that the economy is prone to bursts of strong growth after a crisis and the fast development of pension funds and other institutional investors means that equity markets are set at some point for an influx of new money. And some stocks continue to deliver strong performances, even though the overall picture is miserable. BB Seguridade an insurer has delivered more 60% returns since its initial public offering (IPO) back in 2013. The shares of retailer Renner has surged by more than 30% in the past 12 months. For brave investors building  positions now that the economy is down could appear as a risk worth taking.

The problem is that such positions are only likely to pay out when the economy recovers and few people would try to guess the timing for that today. Brazil does not have an economic problem as much as a political one. With an unpopular president whom a large share of the population want to kick out of office and a fragmented Congress, the government cannot approve the budget cuts and structural reforms to put the economy back on its course. And the track record of Brazilian politicians is not the kind that fuels much hope that a consensus will be reached soon.

“Perspectives for Brazil are much conditioned by the political impasse,” says Juan Ruiz, the chief economist for South America at BBVA Research. “The current situation implies a strong recession in 2015 and 2016, with significant deterioration of public accounts.”

While the political conundrum persists it is likely that both government and private investments will remain at a standstill, says Lionel Bernard a portfolio manager for Latin America Equities at Amundi. “Improvements in equity markets will come when the political scenario allows for the creation of a coalition in Congress that is able to vote reforms,” he says.

However, he says that in the current scenario there are still some plays to be made. For example, companies in sectors not too closely correlated with economic expansion, such as certain utilities, could provide interesting returns. “In generation of energy, revenues are agreed by contract, so they are not linked to GDP growth,” Bernard says. “Distribution can be affected by lower demand but, on the other hand, tariffs are corrected according to inflation.”

He also notes that some of the rebalancing of the economy will fall to the export sector which is set to reap the benefits of currency devaluation. “In terms of valuation, exporting companies continue to make sense although you have to be selective about them,” he adds. “For example, we are looking at the protein sector, pulp and paper, and industrials – mainly automotive and auto parts. In agricultural commodities it is very clear that South America has a competitive advantage. In metals, too, but they could remain unattractive for a longer period of time.”

Bernard says he has also started to look at value stocks in the Brazilian market, although in a cautious and selective way. That is because even though he envisions a possibility that the political scenario will improve in forthcoming months, he does not feel enough conviction about it to march into Brazilian equities at full throttle. In fact, he does not disregard a worst-case scenario where the current malaise will drag on all the way to 2018 when new elections are scheduled. And there are analysts who see a much bleaker future for the economy and stock markets alike.

Marcos Casarin, a senior economist at Oxford Economics, says that if things go well in 2016 the Brazilian government will make the fiscal adjustment that it should have done this year but did not have the political will and ability to do. Once – and if – the budget situation improves, unpopular structural reforms will be required in areas such as tax rules, pensions and labour laws to unlock the country’s economic potential.