One of the standard claims about the performance of emerging market equities turns out to be wrong. Countless asset managers have contended that emerging markets’ share of global capitalisation will inexorably converge with the countries’ much higher proportions of world GDP and population. Yet, over the past 11 years at least, emerging market and, indeed, frontier market equities too have flatlined as a share of the global investible universe.

This is one of the key findings, perhaps the most striking, of the latest annual Credit Suisse Global Investment Returns Yearbook. The study is jointly authored by three academics associated with London Business School.*

This year’s main innovation is the addition of a chapter on emerging and frontier markets. The team has endeavoured to compile as comprehensive a study as possible based on the available long-term data.

Paul Marsh, emeritus professor at London Business School and one of the report’s co-authors, tells IPE that in relation to emerging equities’ small global share, there are two related puzzles rather than a single distinct one. “There is the question of why over the past 11 years they have more-or-less flatlined. And the proportion of world market cap accounted for by emerging plus frontier markets has been roughly constant.” The other relates to why even back in 2007 such markets accounted for such a small share of world market capitalisation. Even then, it might have been expected that their holdings would be higher.

He starts by eliminating one factor that could, in principle, provide an explanation for the flatlining. It is not the case that a large number of emerging markets achieved developed-market status over that period. Although Israel and Portugal were promoted over the past 11 years (with Greece promoted and then relegated again) the addition of some wealthy Arab Gulf states, which are classified as emerging markets, roughly counterbalances the promotions.

Instead, the reason for the flatlining relates to the particularly strong performance of US equities, rather than the poor performance of emerging markets. “It wasn’t that emerging markets did badly. It was, rather, that one developed market did really really well and that was the United States,” Marsh says.

But there is a deeper reason why emerging markets have not only stayed low as a proportion of global equity market capitalisation but had that position in the first place. That is because of the way the emerging market equity universe is defined in relation to international indices. First, such measures tend to be based on the free-float portion of emerging markets rather than the whole universe. “Whole swathes of emerging markets are not accessible to investors,” he says.

In addition, companies that have below a certain threshold of free float or trading volume are excluded. That also counts against emerging markets in international comparisons.

“On a total-cap basis, emerging markets would look more important,” says Marsh. So the rules governing the composition of equity indices lead to an understatement of the true scale of emerging markets.

“The differences relate to market accessibility,” says Marsh. “Factors like corporate governance and investor protection, as well as liquidity and volume and velocity.” 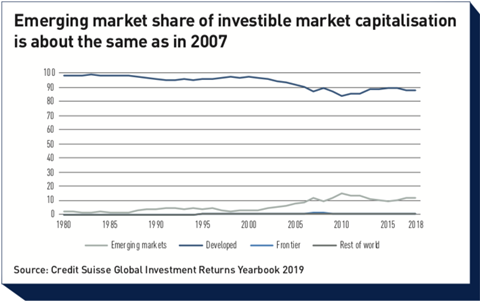 That is why there are several developed economies, as defined by income per head, which are defined as emerging markets. South Korea is the classic example, as it is a wealthy country but there are concerns about the convertibility of the currency.

The Arab Gulf states also show a big discrepancy between their wealth levels and the accessibility of their markets. Qatar, with the highest GDP per head in the world when measured by purchasing power parity, is classified as an emerging market. Other relatively wealthy countries, such as Bahrain and Kuwait, are classified as frontier markets.

At some point, the trend could once again reverse when China is promoted to the ranks of the developed markets. However, Marsh says such a shift will take a while. “It will probably be 10 years before China will be contending to be a developed market,” he says.

There are also reasonable grounds to put China in a category of its own, rather than include it as an emerging market. Apart from the country’s vast scale and its rapid economic growth, he points to the large role played by private investors and the high proportion of government ownership.

Finally, it is worth bearing in mind what Marsh describes as the biggest surprise in this year’s survey. There is a remarkable divergence in the China market indices used by global investors. Whereas the MSCI China – the one overwhelmingly preferred by international investors – shows an average annual increase of only 1.1% since the end of 1992, the corresponding figures for FTSE China and the S&P China BMI are 10.3% and 7.4% respectively.

It is another salutary reminder that headline figures rarely tell the whole story in investment as elsewhere.