Bringing blockchain to pensions: How ‘smart ledgers’ could benefit CDC

The use of ‘smart ledger’ technology could support the take-up of collective defined contribution (CDC) schemes, according to a new report launched in London last week.

It described the use of the technology – commonly known as blockchain – as “a natural solution” to governance and administration challenges posed by a CDC structure.

“Smart ledgers support transparency around decisions, costs and entitlements, and allow for better implementation of collective savings schemes, which will result in superior member outcomes,” the authors wrote.

Transparency around the decision-making process – which the report said was “not something that currently exists in pensions” – would be provided because smart ledgers “ensure the accuracy and immutability of previous records, including the assumptions and decisions of trustees”.

Smart ledger technology also afforded transparency to members, they argued, because they could view in real time the capital value and income equivalent of their CDC pension as well as its historical evolution.

This was because “multi-period accruals of assets, contributions and the entitlements of scheme members, as well as pension payments, are all linked in chains over time”.

In the context of pensions, the report argued, smart ledgers could provide the mechanism to automate transactions and decision-making processes.

“Most importantly, the reduction in central third party power could result in increased trust in pension’s management, with the concomitant point that increased trust would then be more embedded in the technology,” it said.

The report was co-authored by Con Keating of the European Federation of Financial Analysts Societies, and Iain Clacher and David McKee of Leeds University Business School.

While blockchain is the more recognised term for distributed ledger technologies, the authors pointed out that it referred only to the technology behind the cryptocurrency Bitcoin.

Smart contracts to the rescue?

The report also explored the concept of “smart contracts”, whereby certain actions and decisions are automated through algorithms. The authors said this idea “provides a powerful architecture for people to interact using automation”.

A 2017 guide published by UK law firm Burges Salmon described smart contracts as “self-executing” arrangements containing “electronic clauses” that trigger processes according to the terms of the agreement: in other words, when a certain condition is met, a corresponding obligation is triggered. 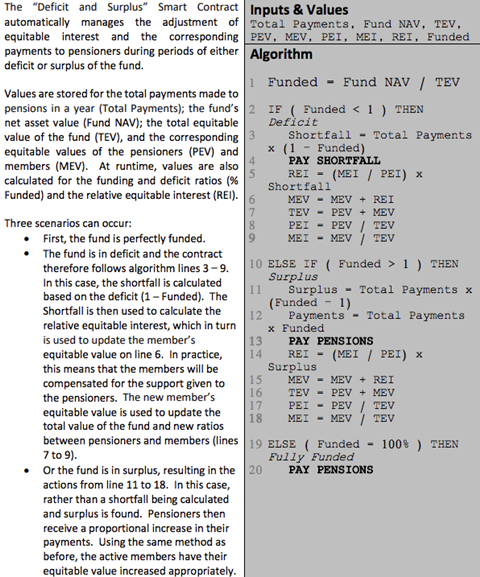 In a CDC pensions context, the report said “smart rules” were simply the codified versions of scheme rules. Building them into a system would therefore be “a relatively trivial exercise”.

The report provided examples of a smart contract for decisions related to recovery periods, and deficits and surpluses (see image, right).

The consistent application of “some simple but effective” rules could prevent a problem common in any collective arrangement, namely “the possibility of overconsumption today at the expense of future beneficiaries”.

“If CDC pensions were to implement smart contracts, this prevents the overconsumption problem and ensures inter- and intra-generational fairness, a key concern in pensions,” the authors wrote.

“Moreover, the use of smart contracts ensures consistent low-cost administration.”