China, Russia and Turkey are among 49 countries that are “non-investable”, according to an analysis of their potential for long-term sustainable development by Candriam.

This means that Candriam would not invest in these countries as part of its socially responsible investment (SRI) funds, subject to big developments during the year that could affect the countries’ scores. It is free to invest in them for its other funds.

Currently 26% of Candriam’s assets under management is “engaged in SRI screening processes”, a spokesperson told IPE. This is up from 21% at the end of 2016.

Candriam scored the countries based on how well they manage their four main resources: human capital, natural capital, social capital and economic capital.

Each of these four domains in turn incorporated a wide range of environmental, social and governance (ESG) issues, as well as the UN’s Sustainable Development Goals.

Russia scored below the 35 points an emerging market needed to be considered eligible for investment under Candriam’s methodology. The country’s score was almost unchanged from last year, but the manager ranked its management of natural and economic resources lower.

Large-scale deforestation and slow development of renewable energy sources counted against Russia’s ranking, as did the impacts and implications of its economic recession in 2015-16.

Turkey was considered eligible for investment in last year’s assessment, but its move towards an authoritarian system of government meant this changed, Candriam said.

For an emerging economy, China is still “median” from an ESG perspective, according to Candriam.

The country scored zero on “social capital” given its one-party system, lack of media and religious freedom, discrimination of ethnic minorities, and other activity falling foul of international democracy and anti-corruption standards.

The full list of countries deemed ineligible for investment can be found below, and the full Candriam report here. 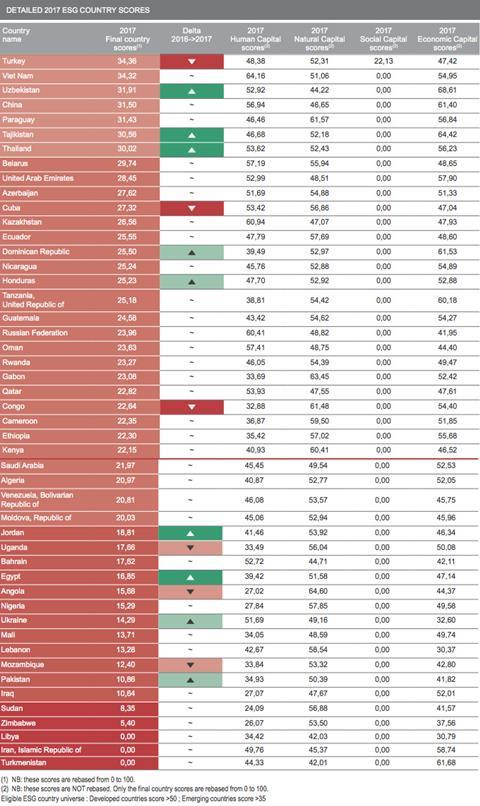