The trickle of capital flowing out of emerging economies has turned into a roar. Huge flows are deserting the developing world in search of new homes in the richer countries.

It would be wrong pin all the blame for recent stockmarket volatility on this development but it is clearly part of the story. The equity markets seem to be unsettled, at least in part, by what looks like deteriorating prospects for global growth and emerging economy growth in particular.

In sharp contrast, bond markets in the developed world could be benefitting from the same trend. It looks like a good portion of the capital flowing from emerging markets is going into safe assets in the West. “This is a perfect storm for bond markets,” says Michael Howell, the managing director of CrossBorder Capital, a research firm that specialises in monitoring liquidity.

The shifting fortunes of the emerging economies are apparent from downgrades of economic forecasts by the International Monetary Fund (IMF). Last April its World Economic Outlook predicted that world output would grow by 3.5% last year and 3.8% in 2016. By January it had revised its estimate for 2015 down to 3.1% and was forecasting 3.4% for 2016.

Such figures are not disastrous but they are clearly heading in the wrong direction. What the IMF classifies as emerging market and developing economies accounted for the vast bulk of the downward revisions.

Figures for global capital flows from the Institute of International Finance (IIF), a global association of financial institutions, certainly make grim reading for the emerging world. Net capital flows to emerging market economies went from a positive $339bn (€301bn) in 2013 to a negative $111bn in 2014 and an estimated negative $735bn in 2015 (see figure 1). The projected net outflow for 2016 is $448bn. 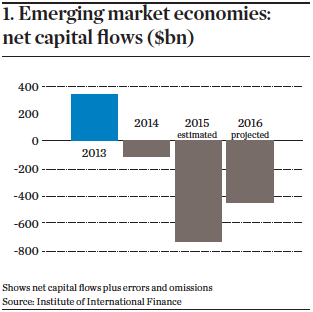 To understand the figures it helps to slice them and dice them. For a start it is necessary to recognise that they are net. Huge amounts of capital flow in both directions. Residents of emerging economies send capital overseas and non-residents export capital to the emerging world. The recent trend is for more capital to flow out of emerging economies than into them.

It is also important to note that there are several distinct types of capital flows. Among them are bank lending, foreign direct investment (FDI) and official aid. Each of them has different characteristics. For example, FDI – where a company establishes a business operation or acquires a tangible asset in another country – tends to be more long-term and so less volatile.

However, from a pension fund perspective it is portfolio investment that is of most immediate interest. This includes the buying and selling of financial assets such as bonds and equities. Other forms of capital flow are of longer-term importance but in the short-term it is this kind of flow that counts most.

Figures from EPFR, a specialist information provider, show net portfolio flows turning negative for both emerging market equities and bonds towards the end of 2014.

A large part of the outflow story relates to China. The IIF estimates it accounted for $676bn in total outflows in 2015. But before examining the Chinese story it is worth considering other countries that are experiencing difficulties.

Given the fall in oil prices since mid-2014 it should not be surprising that producers of the commodity are among those that are most challenged. Saudi Arabia has gone from being a substantial capital exporter to an importer.

This shift has had several implications. The Saudi Arabian Monetary Agency (SAMA), the country’s sovereign wealth fund (SWF), has been drawing down its assets.

The desert kingdom is also expected to tap the international bond markets for the first time since 2002. It has also loosened regulations to make it possible for foreigners to buy shares on the Tadawul stock market.

Russia, like Saudi, has also suffered from the impact of collapsing oil prices. However, it also has to contend with the impact of sanctions related to the conflict in the Ukraine. Like Saudi it has had to drawn down its SWF and it has suffered a sharp depreciation of its currency. “Russia has unsustainable levels of capital outflow”, says Michael Howell. “They need to be arrested pretty quickly”.

The impact of shifting flows from any country also depends partly on the policy environment. Those countries that maintain a currency peg with the dollar, such as Middle Eastern oil exporters, typically have to intervene heavily in the currency markets. In contrast, countries that are prepared to let their currencies depreciate, such as Brazil and Turkey as well as Russia, can be more effective in managing outflows.

Rob Drijkoningen, co-head of emerging market debt at Neuberger Berman, says “there are far higher incentives to move money out of countries that are not adjusting on the currency side.”

In his view the quality of government also has a bearing on the likely scale and impact of capital outflows. “It depends on the quality of macro management and the reform-mindedness of countries as well as the business climate.”

Despite the travails of the energy producers it would be wrong to see the shift in capital flows as mainly an oil or natural resource story. Plummeting prices have certainly helped net exporters whereas net importers of energy – perhaps most notably India – have benefited. But there are more fundamental forces at work.

Aidan Yao, an emerging Asia economist at AXA Investment Managers, puts this shift in the current context of narrowing interest rate differentials. A recovering US is moving, albeit tentatively, to raising rates while the trend in emerging economies is to lower rates as growth slows. “The US is clearly a big driver but deteriorating fundamentals in the emerging world partly to blame as well,” he says.

Where rates in emerging economies have risen it has generally been to protect economies against the effects of severe uncertainty. Such shifts are apparent in Brazil, South Africa and Turkey. 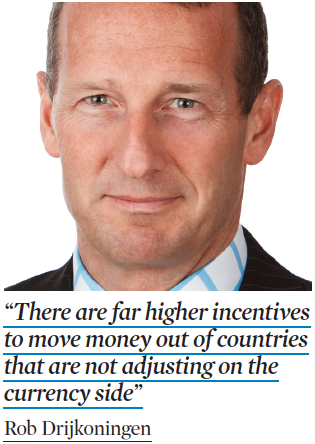 However, he points out additional elements to the story. China has allowed capital outflows, through liberalising the rules, whereas in the past it has been more protective.

Although some commentators see China’s outflows as a cause for concern, Yao is relatively sanguine. He points to four channels through which capital outflows could have an impact but none of them, in his view, presents critical problems. First, there are no signs of a drain of domestic liquidity. Second, capital outflows, althrough weakening the currency, are positive for exports. Third, if capital outflows act to stoke up inflation that could be beneficial to an economy that is experiencing deflation. Finally, China’s external debt levels are substantially lower than the average for emerging Asia. “If you take into account these four channels we’re not seeing any negative impact showing through,” Yao says.

In contrast, Howell sees the plight of the emerging economics, and China in particular, as much more serious. “If you look at the sell-off in currencies and asset markets it’s certainly a crisis,” he says. “Emerging markets have had a torrid three or four years.”

Things could get much worse. If China starts to tighten domestic credit conditions to stem outflows it could lead to a credit crunch. It is already drawing down its foreign exchange reserves quite rapidly. 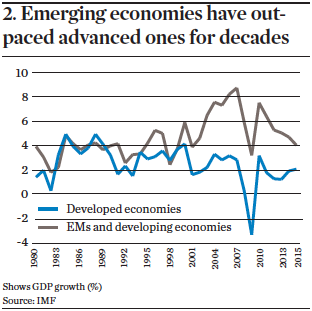 In Howell’s view, capital flight is a symptom of economic fragility. “This drain of capital is all connected to the weakness of the Chinese economy,” he says.

He accepts that there is a chance that, as some commentators have suggested, that the repayment of loans to Hong Kong could account for the surge in outflows. But he says he doubts this is the case as the special administrative region itself is experiencing large outflows.

Howell raises the uncomfortable possibility that the rapid growth that emerging economies have enjoyed for decades may be coming to an end (see figure 2). “The question this comes back to is whether this is the end of the emerging market dream,” he says.

If this is the trend, there may well be short-term beneficiaries. However, for the vast majority of the world’s population it would be better if the answer turns out to be negative. The rapid rise of the emerging economies has been perhaps the most positive economic trend of recent decades.