Regulators must relax restrictions on pension funds wishing to diversify investments, according to Robin Ellison, the chairman of trustees at UK construction company Carillion.

Ellison, who in addition to chairing the £2bn (€2.5bn) Carillion pension scheme is a lawyer at Pinsent Masons and a former chairman of the UK’s National Association of Pension Funds, said that the UK’s pensions regulator lived “in the 19th century”, pushing funds towards an excessively prudent investment approach which constrains their ability to meet their liabilities.

However, speaking at last week’s IPE 360 conference on risk & asset allocation at the London Stock Exchange, he added that accountants and actuaries shared the blame for Carillion’s pension fund having “ridiculous investments”.

“Historically they [the investments] have been considered the right thing to do,” he said.

The UK construction company’s closed defined benefit scheme’s investments are split nearly evenly between fixed income – mostly government bonds – and equities, with a deficit of around £1bn, according to Ellison.

Acknowledging that The Pensions Regulator (TPR) pursued different objectives to pension funds’, he nonetheless bemoaned the pressure that it exerted on UK schemes to invest in government bonds to de-risk.

The thinking behind that stance, according to Ellison, was easily explained. “If we go bust it looks better for them [TPR] if we are in government securities.”

The European Insurance and Occupational Pensions Authority (EIOPA) and the OECD are also part of the problem, according to Ellison, noting that the latter had published a guidance note saying it is wrong for pension scheme trustees to seek higher yielding investments.

And although “we may be wrong”, he said, the Carillion scheme was therefore moving to what Ellison branded alternative de-risking, which involves diversifying by investing in higher yielding assets such as infrastructure, mezzanine debt, and forestry assets. 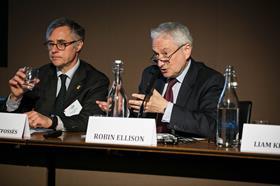 “It’s not a perfect solution, but if we have sufficient diversification we think we’ll be in a better position,” he said.

Carillion has adopted a philosophy of avoiding “reckless prudence”, added Ellison, a phrase repeatedly used by Michael O’Higgins, the former chair of TPR.

“The phrase has resonated with me,” said Ellison. “In other words being prudent to an excessive degree, so prudent that you damage the pensions you are trying to pay.”

“Regulators don’t get it,” said the head of the €23bn French scheme for civil servants, in a reference to the low yield environment and the pressures facing pension funds.

He has previously warned of the dangers for pension funds from the European Central Bank’s monetary policy, and re-iterated his concerns that pension funds will not be able to survive unless rates increase.

To the extent that pension funds are considered as a sort of pass-through, he said, collecting money today to transfer it far into the future, the sector should be “authorised to invest massively in what contributes to growth, basically productive capital and infrastructure”.

Instead, however, his scheme was “encouraged” to invest in government bonds, he said.

“The timing could not be more awful,” he said. “They are encouraging us to de-risk our balance sheet by investing in things that don’t pay anything.

“We should try to convince the regulators just to change the regulatory framework to make it possible to invest much more in alternative de-risking.”