There is a character in ‘Popeye the sailor man’ called J Wellington Wimpy, better known as Wimpy the Moocher. Wimpy is magistrate of the local town, Sweethaven, and his favourite dish is the hamburger, which he is usually eating. However, Wimpy is seldom willing to pay for it and his most common ruse at the diner is to say, “I’ll gladly pay you Tuesday for a hamburger today.”

Unfortunately, the unsuspecting would regularly fall for the scam, until one day the owner of the diner, Rough House, exclaims: “I’m wise to him. He’ll get only what he pays for, he can’t jip me.” However, the wily Wimpy, instead of offering his credit, offers Mr House a gem in exchange for all the hamburgers he can eat. The gem, of course, turns out to be fake.

Pension fund investors should applaud Rough House’s premise – cash today is worth more than the promise of cash tomorrow – even if it ultimately left him out of pocket.

This simple principle is one the market often tends to ignore. Commentators focus on sales and earnings per share, all of which are non-cash items, rather than operating cash flow, working capital and free cash flow, which are all cash measures.

However, the market does this for a reason: the premise of the income statement is to smooth capital expenditures and match income with expenses to give a truer reflection of the economic reality of the business. But in the words of Yogi Berra “in theory, there is no difference between theory and practice; in practice there is”.

A company’s net income is an arbitrary figure, obtained after assuming certain accounting hypotheses regarding accrued revenue, deferred costs, depreciation, amortisation, write downs, write backs, taxation, derivative instruments, pension charges – the list goes on. For those less familiar with the investment industry, it will be surprising to note that, on top of these assumptions, companies tend to publish a whole new income statement which includes further unaudited adjustments. This window dressing is a remarkably common occurrence and in the most egregious cases can result in the market fundamentally mispricing a company.

There is no such thing as an ‘adjusted’ cash flow statement. By its nature, cash cannot be fiddled. It’s either in the bank, or it isn’t. Its main drawback remains that it is lumpy, but taken over a number of years, it is a better measure of the economic reality of a business than the income statement.

A good example of this is the case with Vestas, the wind turbine manufacturer and former darling of the Copenhagen stock market. Between 2006 and 2009, the company grew at a breathtaking pace, with sales doubling and profits increasing fivefold. At the same time, however, cash flow deteriorated with operating cash flow turning negative in 2009. 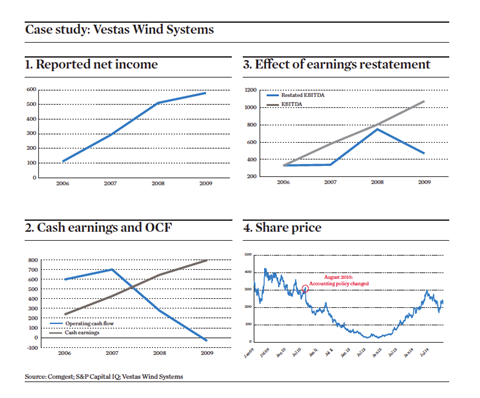 This deterioration was driven principally by working capital outflows in 2008-09 as a result of a marked increase in accounts receivable. In other words, Vestas was booking revenues without receiving the cash associated with them. Over that four-year period, Vestas made a cumulative operating cash flow of €1.5bn but reported cash earnings (net income plus D&A, the P/L equivalent of operating cash flow) of €2.1bn.

In August 2010, the company surprised the market by announcing a change in its accounting policies. Rather than account for revenue on a percentage of completion basis, in other words booking revenue associated with a turbine as the company builds it, it would book revenue only when the turbine was built and the client had paid for it. With this, it restated its 2009 earnings downwards by 78%. The shares lost over 90% of value.

Although this may be considered an egregious example, accounting misjudgments are rife in the market. In a note entitled ‘The Cash Conversion Gap – A Litmus Test for Earnings Quality’, Goldman Sachs attempted to quantify the benefit of prioritising cash flow over earnings. In it, as with the Vestas example, it looked at the difference between operating cash flow and cash earnings. Running a global long/short portfolio of the top and bottom quintiles since 2002 would have generated, on average, 4.9% alpha annually.

Looking at cash conversion doesn’t just address the quality of earnings, it provides information about returns. For a given level of growth, a business that throws off cash will have a higher return on capital than a business that consumes all its available cash. Indeed, it is a better measure than the more traditional balance sheet return on capital employed calculation as it assesses the marginal rather than the historic return.

Perhaps above all, cash is intuitive. The CEO of Luxottica once said, when questioned by an analyst about his ROCE/WACC (weighted average cost of capital) spread and what it meant for value creation, “I measure value creation by the amount of cash accumulating at the bank”.

This disarmingly simple approach is exactly how an individual would assess his personal wealth and is common to most business owners, be they tradesmen, self-employed entrepreneurs, owners of multi-billion dollar global enterprises or Rough House. And yet it is the measure investors focus on least. They do this at their peril.