Chart of the Week: A shake-up in the route to alternatives?

Investors are expected to move away from using pooled funds as the primary way of accessing alternative asset classes in the next five years, according to data provider Preqin.

Almost half (45%) of surveyed fund managers indicated they expected less capital to be invested through pooled funds, although only 15% of investors said the same.

Fund managers viewed separate accounts and co-investments as most likely to see greater investment, with 39% and 42% anticipating this change, respectively.

Just over one-third (34%) of investors expected an increase in co-investments, and 24% thought more capital would flow to separate accounts.

“With capital more often than not in the hands of a small number of investors, fund managers are looking to stand out from one another, enticing investors with more customisable fund structures,” he said. 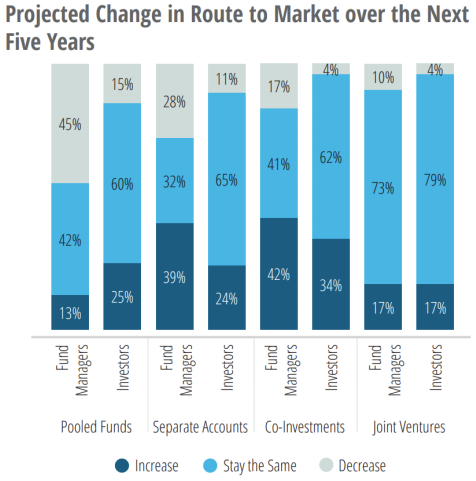 “While pooled funds have in the past accounted for the majority of capital in alternatives, a significant proportion of fund managers expect this balance to shift.

“They predict a rise in co-investment activity, as well as more separate and managed accounts – structures that offer investors more control and often lower fees.”

Preqin’s survey also showed that alternative asset managers were expecting to source less capital from banks and fund-of-funds managers, with almost two-thirds of those surveyed predicting that family offices would play a more important role.

In terms of investor geography, the largest proportion of fund managers (60%) expected to source more capital from Asia-Pacific-based investors over the next five years, while almost a third (32%) anticipated less coming from those based in North America.