Starting in 2009 with covered bond purchases, the ECB has since bought trillions of euros worth of assets in an effort to maintain liquidity in financial markets, buying up public sector, corporate and asset-backed securities.

The purchases totalled more than €2.5trn, according to Mirabaud Asset Management, more than doubling the ECB’s balance sheet to €4.7trn – equal to roughly 40% of euro-zone GDP.

The policy was maintained through Europe’s sovereign debt crisis but has been scaled back gradually since 2016. At the start of this year the ECB’s monthly purchases halved from €60bn to €30bn. They were reduced again to €15bn a month from September.

However, while the central bank will stop growing its balance sheet through asset purchases, it will not stop buying assets entirely. 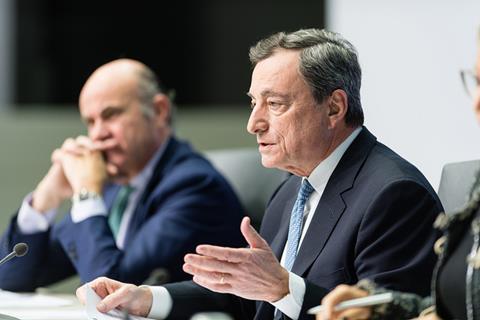 At yesterday’s press conference, ECB president Mario Draghi said: “We intend to continue reinvesting, in full, the principal payments from maturing securities purchased under [QE] for an extended period of time past the date when we start raising the key ECB interest rates, and in any case for as long as necessary to maintain favourable liquidity conditions and an ample degree of monetary accommodation.”

In a note issued yesterday after Draghi’s press conference, Mirabaud’s strategy team said: “Both this stock and signalling effects will help keep sovereign yields in the euro-zone low during this normalisation phase.

“Hence, the ECB follows the path drawn at the time by the Federal Reserve by strengthening its forward guidance and by guaranteeing a very accommodative monetary policy until at least 2020.”

The ECB’s asset purchases since 2015 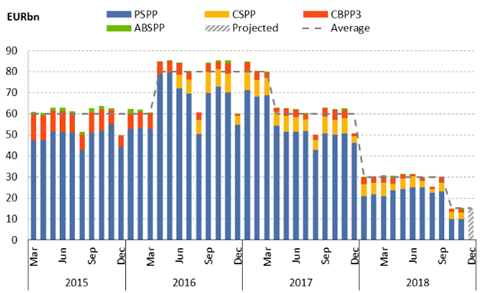 Interest rates remain at all-time lows. The rate on the bank’s main refinancing operations is zero and has been since March 2016, while the rate on its marginal lending facility has been 0.25% since then.

Draghi said yesterday: “We continue to expect [interest rates] to remain at their present levels at least through the summer of 2019, and in any case for as long as necessary to ensure the continued sustained convergence of inflation to levels that are below, but close to, 2% over the medium term.”