There are complexities associated with banks’ contingent convertibles, but Michael Hünseler argues that this, combined with a more resilient, less systemically-linked industry, is a source of value

Contingent Convertibles, or ‘CoCos’, are a relatively new breed of subordinated debt that share characteristics of both fixed-income and equities, introduced as a result of a dilemma faced by politicians and regulators alike during the financial crisis. Because a number of financial institutions were saved from going under using taxpayer money, a formal insolvency was averted. This meant subordinated debt was spared from taking losses, which should be the basic purpose of loss absorbing capital such as equity, tier-1 and tier-2 debt.

To solve this problem, bonds have been created which allow for either a write-down or conversion into  equity, known as a ‘trigger event’, in case the issuer fails to meet certain capital ratio thresholds. Furthermore, regulators can pre-emptively initiate the trigger event at their own discretion if the issuing financial institution is seen to cross a point of non-viability (PONV).

For those additional tier 1 CoCos (AT1) closest to core equity, the coupon payments will be skipped if the means are insufficient. Neither a failure to pay the coupon nor the trigger event itself constitutes an event of default, meaning that CoCos contribute to the going concern of a bank in trouble. In an extreme event, CoCos help absorb losses and preserve value for those creditors ranking higher in the capital structure, which is exactly what core capital is supposed to do.

While one might rightly question whether such instruments are suitable for otherwise risk-conscious fixed-income investors, there are good arguments underpinning a strategic investment rationale for CoCos.

Firstly, the biggest threat for financial institutions during the dark days of the financial crisis was the domino effect from the interconnectedness of the industry, stemming from unhedged or unnetted business. In addition, highly leveraged risks taken in an environment of low credit spreads proved to be fatal, depleting capital below a required minimum. Moreover, no clear mechanisms for stabilising troubled banks or procedures for an orderly unwind of insolvent institutions were in place, which left regulators and capital markets in a state of limbo, if not panic.

Seven years later, we live in a different world. Capital requirements have been drastically raised, other measures such as liquidity coverage and leverage ratios have been implemented to shore up banks’ resilience. While this does not make them immune to mistakes, it removes the systemic risk arising from a bank failure, demonstrated by the restructuring of Banco Espírito Santo or the nationalisation of the Dutch SNS Bank, both of which took place without negatively affecting the industry. 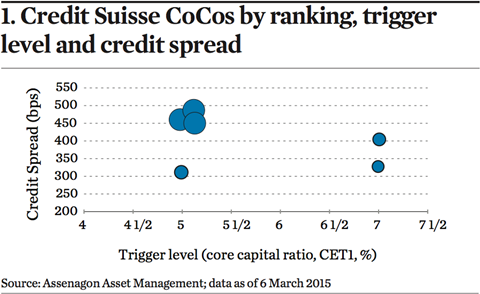 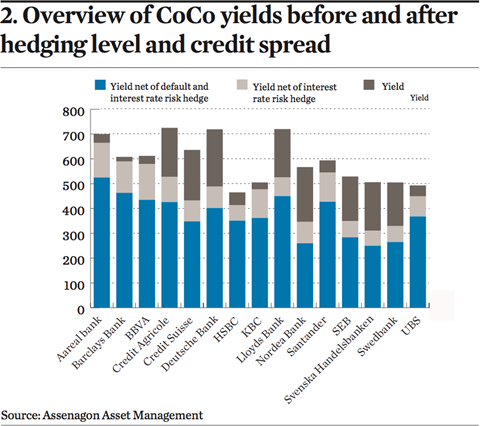 Having said that, while the probability of a bank going bust might be lower today, it still cannot be ruled out. The introduction of CoCos is a game changer in that the probability of the issuer experiencing the trigger event becomes more relevant than the default probability. In some cases even the hierarchy of claims is overruled by trigger ratios where higher-ranking securities with a higher trigger might experience a trigger event before more deeply subordinated capital.

While some percieve a risk that CoCos might be written off or converted into equity before stockholders start to see losses, it is very likely that regulators will exercise the PONV before any trigger event takes place and thus let equity investors bear the brunt of losses. Moreover, it is fair to assume that supervisors will take preventive measures such as ordering a reduction in risk-weighted assets or the sale of certain businesses, or stopping the distribution of dividends, coupon payments and bonus payouts, long before a capital ratio enters the critical range.

The broad acceptance of CoCos by regulators, who are said to encourage European banks to issue these instruments, has led to a rapidly growing market with 24 financial institutions having issued 73 CoCos with a market value of close to €100bn. While 2014 was a particularly busy year, it nonetheless did not see the development of a certain standard: CoCos vary by trigger level and trigger event, as well as the relevant trigger measure, ranking, currency denomination and maturity among other factors. This has created a space in which investors struggle to deploy evaluation methods commonly used to assess the fairness of a bond price.

In particular, ratings – ranging from BBB to single-B – do not offer a consistent explanation for CoCo credit spreads. Although these bonds are highly individual, they can be compared to an equity product with similar cash flows and anatomy. This, in turn, allows the application of a customised Black-Scholes Model, using market data such as stock prices, volatilities, CDS or bond spreads and interest rates, but not the capital ratio, to compute the probability of an issuer hitting a CoCo trigger before maturity. This approach allows for a comparison of CoCos from the same issuer, even if they have different features, therefore allowing for an assessment of relative value (figure 1).

While the model yields encouraging results, it seems to be insensitive to market conditions and thus points to a certain efficiency of capital markets in evaluating CoCos. The caveat here is that CoCos, so far, remain largely untested. Since capital ratios are usually only reported in quarterly, semi-annual or annual results, investors appear to have an information disadvantage compared with both auditors and regulators. The short time from first signs of trouble to the rapidly accelerating death spiral and failure, which often takes less than a few weeks, creates some uncertainty as to whether CoCos are money-good.

A strict and disciplined investment process based on sound fundamental analysis is therefore a prerequisite for investing. Hedging of trigger risks using equity derivatives can significantly reduce the idiosyncratic risk attached to listed CoCo issuers. Costs for such options are mostly between 0.75% and 1.5% for one-year duration. Hedging interest rate and currency risks is even less costly, given how low rates are these days. Applying those hedges leaves the investor with the default protected credit spread, which amounts to more than 4% on average (figure 2). This should not be confused with capital-structure arbitrage as it carries a significant risk of volatility driven mainly by the price of the CoCo.

As CoCos continue to supplement, if not replace, traditional subordinated bonds over time, this part of the fixed-income market requires a far higher degree of specialisation than in the past. Moreover, new bail-in rules, the conviction of politicians to hold bank creditors accountable for losses and in particular the ‘no-creditor-worse-off’ principle of the Bank Recovery and Resolution Directive (BRRD) will have substantial and detrimental effects on other, non-CoCo subordinated bonds. From this perspective, CoCos appear to offer attractive relative value, perhaps due to their complexity, which also often leads to tendentious reporting in the media.

Michael Hünseler is head of fixed income portfolio management at Assenagon Asset Management, based in Munich