Why has there not been another global financial crisis over the past decade? That is a more fruitful question than trying to predict when the next bout of market mayhem will hit.

There will undoubtedly be another meltdown. However, it is impossible to say for certain whether it will hit next month, next year or in the next decade. Both the world economy and financial markets are suffering from long-term structural weaknesses. These are not the normal end-of-cycle excesses but problems that have built up over decades.

Productivity growth and economic growth in the western developed economies have trended downwards since the 1970s. Business investment is also anaemic. In the financial sphere, real interest rates have fallen since the early 1980s. For more than a decade quantitative easing has helped stave off financial collapse, while in the process giving policymakers space to avoid tackling the underlying problems. The volume of negative yielding debt has reached vast proportions.

Investors tend to underestimate these problems because of the narrowness of their perspective. They generally have a short-term focus on cyclical rather than secular developments and they typically pay little attention to the productive world of the real economy.

The challenge facing those who are aware of these trends is not predicting the next crisis but explaining why one has not happened already. On the face of it a meltdown is long overdue.

Probably the main reason for the delay is the high level of international cooperation. Western leaders have learnt from the terrible experience of the prelude to the world wars that there is much to be gained from working together. It gives the global economy far more resilience than it would have otherwise.

A related development is the rise of China from marginal economy to global giant. China’s increasing strength has helped to offset the weaknesses of the western economies. 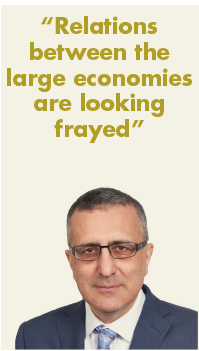 The key problem now is that relations between the large economies are looking frayed. Although the focus is on trade there are also many disputes on topics as varied as investment flows, technological supremacy, espionage and cyberattacks.

It is all too easy to blame Donald Trump for heightened tensions since he is the most prominent advocate of a unilateral world view. However, the divisions cut much deeper. His crusade against China has broad support from across the US political class while Europe too is hardly averse to protectionist measures.

The rise of populist movements also gives governments less room to manoeuvre internationally. Policymakers face a difficult balancing act between keeping their domestic populations happy and cooperating with other nations.