Deleveraging is no free lunch

After temporarily shutting down the global economy, governments are pursuing a massive fiscal expansion in order to support struggling businesses and consumers.

Central banks are instrumental to enabling these policies. By maintaining interest rates at low levels and purchasing government debt, they are keeping governments’ borrowing costs in check. This approach has worked, but it is leading to record levels of indebtedness.

The question of how the world’s economy will deleverage has become fundamental. High levels of debt are a drag on investment and economic growth. Paying off that debt should therefore be a priority.

The concept of debt cancellation is gaining traction. Many commentators argue that government debt owed to central banks, as opposed to the debt owed to citizens and institutions, could be cancelled.

Debt cancellation would, in theory, be preferable to eroding debt by promoting higher inflation. Past experience suggests it is difficult to stop inflation spiralling out of control. That would be a particular danger with the huge amounts of liquidity that central banks have injected into the economy.

However, there is no clarity on how debt cancellation would work or what its effects would be.

Some are suggesting that governments could issue bonds with extremely long maturities and an interest rate of zero. Others say it would be sufficient for governments and central banks to agree that debt is never going to be repaid.

For this approach to work, governments would have to convince that debt cancellations are a one-off.

There is little historical precedent for this policy. Post-world war periods seem to be the only instances where Western governments have been relieved of their debt obligations.

The details are sketchy but the enthusiasm surrounding the idea could lead to the conclusion that the potential ill effects do not matter.

Debt cancellation cannot be a free lunch. It is plausible that it would lead to higher borrowing costs in the short term and that there would be currency effects. Such a policy could also have significant political consequences at both the domestic and international level. 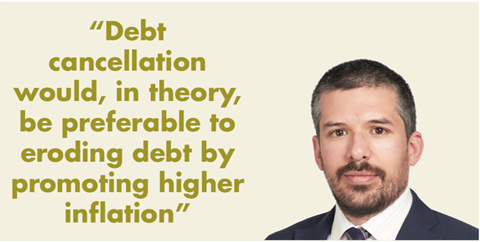 Whatever method policymakers choose for bringing down the global debt-to-GDP ratio, the deleveraging process will be messy and painful.

Surely the best way to bring down the debt-to-GDP ratio would be to achieve higher GDP growth. Policymakers should focus on promoting economic expansion. Otherwise our economies risk becoming trapped in a debt prison forever.