Investment analysts make contrasting buy and sell recommendations for individual securities based on identical financial information – down to the last decimal point. The differential is judgement.

Likewise, faced with the same or similar information, institutional investors will make different decisions about how to best allocate long-term capital. The differential again here is judgement.

Portfolio divestment from fossil fuels means different things to different folks. This might seem obvious, but it is worth pointing out that some of the large institutions making recent divestment pledges – ABP in the Netherlands and the Yale or Harvard Endowments – are very different animals indeed. And their approaches differ in key areas.

ABP is a €528bn behemoth with over one million active members (meaning about one in every nine Dutch workers pays contributions to ABP each month), and three million members in total if you count deferred members and pensioners. Therefore, its footprint in Dutch society is considerable. Its membership is diverse, spanning government, education and the military.

Following pressure from civil society groups and having held out for a long while, ABP now says it will divest from public market oil, gas and coal producers in equities and bonds by 2023. It will also divest from its €3.5bn allocation to commodity related infrastructure – pipelines and the like – but this will take longer.

APG, the fiduciary manager for ABP, will probably want to speak to some of the US Ivy League endowments about divestment from illiquid investments. Harvard’s $42bn endowment, which announced its plans for fossil fuel divestment in September, has already reduced its carbon footprint by 43% from 2005 levels. But all of its investments are in private markets and the divestment will be gradual.

US universities are a laboratory of considered fossil-fuel investment policy. Yale’s endowment has also this year announced divestment plans for fossil fuels, albeit in a more multifaceted way. 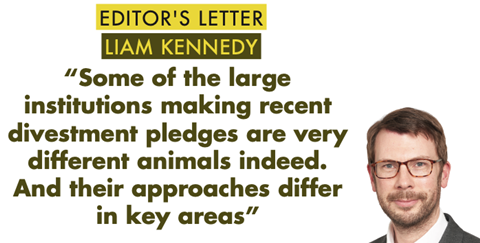 Jonathan Macey, a Yale Law School professor and chair of an interdisciplinary committee that drew up a list of fossil-fuel companies ineligible for investment, says selective divestment is a much more powerful tool than blanket divestment that doesn’t recognise diversity in the sector “and that some are better citizens” than others.

But these capital reallocations make no contribution to real-world carbon emissions. As PensionDanmark’s head of ESG Jan Kaeraa Rasmussen contends in our Towards Net Zero report in this issue, the aim is not to decarbonise the portfolio but to be an investor in a world that has decarbonised.

Large listed companies face no shortage of capital and new investors will always step in to replace equity sellers or to fund new debt. Equity sellers forfeit voting rights and can’t engage with companies, and new owners may be less engaged than engaged owners like ABP.

Yet ABP’s contention is that it can influence the demand side for fossil fuels, by engaging with all the other companies across its equity and debt portfolio to shrink their carbon footprint.

There’s no immediate right or wrong answer here and the success or otherwise of this approach will only be evident in years to come, likely beyond the tenures of the current chair and her board.

Endowments and foundations can, of course, much more easily align their investment portfolios with their own mission than can a large pension fund. Yale’s own Program on Climate Change Communication notes that younger citizens are considerably more concerned about climate change than older cohorts.

Alternatives to the engagement-versus-divestment debate are emerging. One is buying and holding carbon emissions permits and removing them from the market to drive up the price.

Another is the role of short selling in a portfolio, where an emerging group of investors, like AQR’s Cliff Asness, Finreon’s Ralf Seiz (see this month’s interview) and indeed Harvard’s own CIO, Rick Slocum, contend that short-sellers should be able to deduct the carbon footprint of the target company from their own carbon footprint.

AQR’s Cliff Asness, in a paper from September this year, points to the real-world market signal of short selling: “Shorting has impact by dissuading companies from pursuing whatever is objectionable to the short community in aggregate.”

At the moment there is no agreed framework for this to happen, so it is a fruitful area for regulators and policymakers to exchange views. And indeed for academics to research.