Japan is not that different

One of the abiding myths about Japan is that it is different from everywhere else. Not just distinctive in the sense that all countries have peculiarities but uniquely different.

The idea of Japanese uniqueness has a strong hold both inside and outside Japan.

Within Japan it is sometimes linked to a sense of national superiority. This is most clearly embodied in the substantial body of literature known as Nihonjinron (literally ‘Japan person theory’). But it was also widespread in relation to Japan’s success in containing COVID-19. It was maintained that Japan did so well because of its superior cleanliness and greater consideration for others.

In the West the idea of Japanese uniqueness is often viewed negatively. That was most apparent during the second world war when the Japanese were routinely portrayed as a race apart. But even today the Japanese are viewed as peculiar.

From this starting point it is all too easy to see confirmation in Japan’s recent pandemic experience. At first sight it seems completely different from almost every other country; a small number of casualties – despite Japan’s relatively old population – and no lockdown.

But a closer examination reveals that Japan’s experience, while not identical to that of Europe, is not completely at odds either.

Although there was no legally mandated lockdown, the Japanese population took it upon themselves to limit social contacts. This was achieved by following official advice but without government diktat. Compulsion was seen as unnecessary as the Japanese voluntarily took distancing measures. 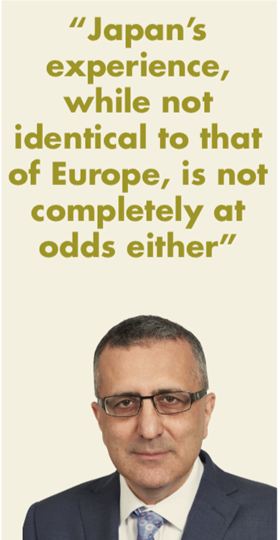 This suggests a high degree of social solidarity in Japan – or conformism if viewed negatively. But in other respects the impact of the pandemic was similar to that on other developed countries. The economy was hit hard, particularly services, as people stayed at home. Exports were hit as Japan’s trading partners also suffered as a result of economic lockdowns.

So despite the much vaunted differences, the Japanese stock market behaved in a similar way to those in developed economies (see p49). Those exposed to the domestic service sector and public transport did badly. Technology and autos, in contrast, did relatively well.

Indeed the auto sector provides a good example of similarity and difference with the West. The authorities in both Europe and Japan are, for example, trying to encourage a shift from conventional cars. But in Europe the preference is for electric vehicles while Japan favours hydrogen fuel cell technology.

There are certainly significant differences between Japan and the West but there are many similarities too.