Hopefully one of the few benefits of the COVID-19 crisis will be to show that the impact of an ageing population is exaggerated. There are other key elements informing the ability of a society to provide decent pensions by whatever means.

The conventional view has become second nature in the pensions industry. It starts with the fact that the old age dependency ratio – the ratio of those of retirement age to those of working age – is rising. Therefore, so the argument goes, it is necessary to bolster pension provision. Governments can no longer afford to offer such generous state pensions and people should turn to corporate or individual pensions to bolster their retirement earnings.

Even experts within the pensions industry will concede this is a limited view when pressed. They know full well that it is an oversimplification. Yet it remains the model people recall when they think about pension provision.

There are several reasons why it is a partial view. For a start, children are dependants as well as the elderly. Yet children are also a declining share of the population. That means in relative terms the proportion of spending on education and child care tends to fall. That at least partially offsets the rise in provision for the elderly.

More importantly the ability of any society to pay for pensions – whether through the state or the private sector – depends on its economic dynamism. The stronger an economy, the greater its ability to support reasonable pensions. 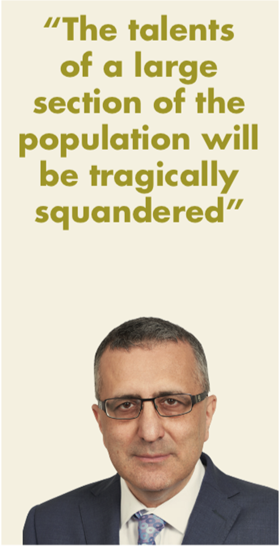 As I argue in this issue, the world, including Europe, is facing a crisis of surging unemployment and increasing job insecurity. In other words, many people of working age will be contributing little, if anything, to economic output.

This presents a huge problem to society in general and pension provision in particular. It means the talents of a large section of the population will be tragically squandered. And providing reasonable pensions for all but the already affluent will become increasingly difficult.

Of course, this problem already existed to some degree before the pandemic. But it will become even more pressing in the post-COVID world.

The pensions industry should be aware that it is becoming increasingly difficult for it to fulfil its purpose of helping to provide a reasonable retirement income. That should be its top priority in the years ahead.