Judgement needed more than ever

There are good reasons why even the most ardent technophile should be wary of the excitement surrounding new investment-related technology. Big data, artificial intelligence, machine learning and blockchain all no doubt have promising applications in the investment world. 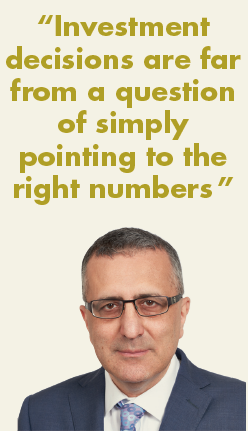 At the same time, there is a risk that such technology will be used as a screen to hide behind for those who are nervous about exercising their own judgement.

Take a longer-running debate to illustrate the point. It is common to hear an investment case being framed in relation to an equity valuation metric. Something along the lines of “that market is attractive because it is only valued at x according to a particular measure”. But that begs the question of how such claims should be assessed.

There is certainly no shortage of metrics with impressive pedigrees. The Shiller P/E, for instance, was popularised by Nobel laureate Robert Shiller. The q ratio was devised by Nobel laureate James Tobin. Among others are the Buffett Indicator – the ratio of stockmarket capitalisation to GDP –  favoured by the legendary investor Warren Buffett. There is also the Fed model which is apparently, although not officially, backed by the US Federal Reserve.

The problem is that, at least in today’s peculiar conditions, each metric gives radically different answers. Equities are either grossly expensive, reasonably priced or alluringly cheap.

This wide divergence at least has the advantage of highlighting the need to question such metrics. It is hard to imagine how they can all be right. Or if they can be reconciled, they must somehow represent different things.

Resolving the conundrum means taking a view on a broader range of questions. For instance, the extent to which quantitative easing is bolstering the markets. Or the extent to which brands and human capital should be incorporated into market valuations. Investment decisions are far from a question of simply pointing to the right numbers. Judgements have to be made on a range of related matters.

Yet in these times when ‘non-judgementalism’ is lauded it is easy to understand the temptation to hide behind numbers. It is all too common to see claims being made in terms of supposedly incontrovertible evidence or hard numbers. Broader questioning is too often downplayed or ignored entirely.

It is easy to see a similar tendency developing in relation to newer technologies such as artificial intelligence or machine learning. Conclusions will often be framed as the outcome of incontrovertible processes. The role of judgment in drawing conclusions will recede into the background.

New technologies should be welcomed as a way of extending the power of human reasoning. They cannot be a substitute for it.