“This time is different”. Such claims were rightly skewered in a well-known book by Carmen Reinhart and Kenneth Rogoff. But with the benefit of recent experience it should be clear that their argument did not go far enough.

Experts who used their knowledge to justify overinflated markets were the butt of Reinhart and Rogoff’s argument. Such pundits are all too ready to support valuations that would normally make investors’ eyes water.

However, the cry of “this time is different” – or at least equivalent phrases – is more widespread than Reinhart and Rogoff seem to realise. The glaring current example is the contention that COVID-19 changes everything. It means, so the argument goes, that the world has entered a new normal where the old rules cease to apply.

Similar claims have been made in the recent past in relation to social media and to the internet. Both have been credited with transforming the way the world operates.

Take the example of COVID-19. It is often claimed to have changed the world in several important ways. For example, many argue that it represents a watershed in relation to globalisation. It has led firms to put more emphasis on resilience and less on efficiency. As a result, companies are likely to scale back their international operations (see China Report in this issue).

However, a closer examination shows this view is misleading. For a start, the discussion of deglobalisation pre-dated the COVID-19 pandemic by about a decade. It began to gain ground in the aftermath of the global financial crisis. 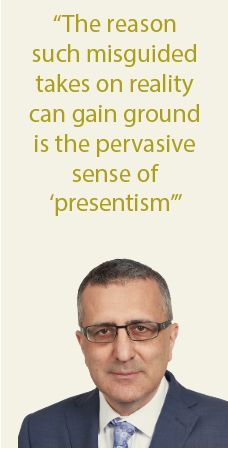 In addition, deglobalisation is much more talk than reality. Foreign investment flows into China, for example, are still net positive despite the trade war and the pandemic.

The reason such misguided takes on reality can gain ground is the pervasive sense of ‘presentism’. Relatively few observers have an appreciation of historical change. They simply live in a continuous present.

This lack of perspective means they have no intellectual anchor. They react to events and developments – such as the COVID-19 pandemic and the rise of social media – but are unable to properly assess their importance.

An ironic by-product of this trend is an inability to recognise the rare instances when fundamental shifts do occur. For instance, the rise of China in recent decades, from economic minnow to global superpower, is of genuine historic importance. It represents much more than the emergence of one particularly large Asian market. On the contrary, its rise to prominence is challenging the global order that emerged in the wake of the Second World War.