Thanks to a remarkable comeback in April, equity markets have partly offset the collapse that took place as a result of the COVID-19 pandemic.

In recent discussions of the impact of the outbreak on financial markets, several institutional investors have pointed out how the rebound could seem unjustified.

The prospects for global economic growth are gloomy, as governments have sought to tackle the pandemic by entirely locking down. The slowdown in economic activity has filtered through to corporate earnings forecasts, which have been revised downwards.

However, by certain key measures, equity markets seem to be assuming the downturn is not as great as the economic data suggests. As of the end of April, the price-to-earnings ratio of the S&P 500 was about 20. European indices such as the FTSE 100 and the DAX were trading at only slightly lower multiples.

This is not the first time financial markets appear disconnected from the real economy. It could be argued they have been disconnected for most of the past decade. Governments and central banks provided massive fiscal and monetary stimulus in response to the 2008-09 financial crisis, which distorted asset prices, and never really turned off the money tap.

The scale of the stimulus has dwarfed that during the last global financial crisis. The International Monetary Fund (IMF) pointed out that central banks are planning to expand liquidity provision to at least $6trn (€5.5trn) and are prepared to do more if necessary. By comparison, the US government mobilised $2trn from the first signs until the end of the last crisis.

While central banks provide liquidity, governments are focusing on extending loans to businesses, to cover cashflows and avoid bankruptcies. It might work as a temporary measure but it does not stimulate economic growth in the long term. 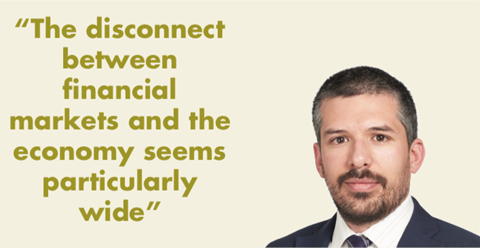 The situation suggests that the worst for financial markets may be yet to come. Once more clarity is reached on the actual economic impact of national lockdown measures on the global economy, asset prices are likely to suffer further.

Volatility in equity markets is set to persist. But the questions hanging over institutional investors is whether corporate defaults will affect credit markets, creating a systemic crisis as funds become forced sellers of assets. The IMF has, once again, warned that this may be the case in the first chapter of its Global Financial Stability Report released in April.

This time, the disconnect between financial markets and the economy seems particularly wide.