Pension funds and asset managers: Are you a Yamaha or a Steinway?

In the 1970s, Genichi Kawakami, president of Yamaha Corporation from 1950-77, wanted his pianos to rival those of Steinway. 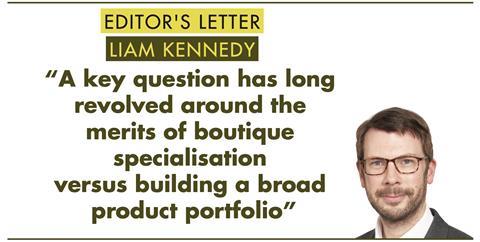 Yamaha and Steinway are fascinating business case studies. Kawakami, a restless spirit, diversified Yamaha by expanding into guitars, a range of other musical instruments, and sports equipment; Yamaha Motor, split off in 1955, makes motorcycles, sea scooters and other motorised kit. Steinway, set for an IPO this year, has always focused on low production and the highest quality.

An entry level upright Steinway will cost you around $40,000; the equivalent Yamaha instrument, just $4,000; yet Yamaha still aims to compete at concert-grand level, where the prices are about the same.

“Put yourself in the shoes of the user and build world-class products,” Kawakami once said. He did that, even if Yamaha never quite achieved the same brand cachet for its pianos, even if they still do an excellent job.

Clearly, some organisations can do multiple things well at scale. In the asset management business, a key question has long revolved around the merits of boutique specialisation versus building a broad product portfolio. Whether or not managers can retain focus and quality across a range of strategies is a moot point.

AMG, which owns a portfolio of asset management boutiques, has conducted proprietary research that points to a cluster of key advantages of the boutique structure.

They include an alignment of interests, including across generations, a focus on investing, an entrepreneurial culture and the ability to build long-term franchises. Investment consultants commonly subscribe to this view.

Pension funds have adopted differing investment models over the years, ranging from complete outsourcing to the creation of substantial in-house operations.

Historically, in Europe at least, investment operations often grew from in-house buy-and-hold government bond portfolios, sometimes with a domestic equities capability on top. Specialist capabilities would be outsourced to specialists.

A more ambitious model, with roots in Canada, has seen the creation of large professional in-house capabilities and a strong focus on private markets.

Other pension funds are moving on from in-house management, and fiduciary managers have gained some market share, particularly in the UK and the Netherlands.

For maturing schemes in places like the UK a key driver is the need for cashflow-driven strategies across a range of asset classes.

In the Netherlands, despite a lack of clarity about the new pensions deal, pension funds will retain large active scheme memberships and should be able to take greater investment risk in future.

Taking a mean reversionary perspective on markets, that should mean a higher weight to equities. But starting a new investment strategy in volatile market conditions can lead to some uncomfortable choices – member account balances will fluctuate for all to see – which could lead to an erosion of confidence in the system in bad conditions. That could point the way towards greater investment in illiquid asset classes.

Aside from the question of how to structure illiquid assets in a DC environment, sourcing the right real and private markets assets will be the most important element. Few European pension funds have been able to build large-scale in-house illiquid private markets capabilities.

The pressures on smaller players in the Dutch fiduciary market are considerable; the likes of MN once sought to compete for business internationally but its part owner, the metal scheme PME, has decoupled itself from MN, which it also sacked as an admin provider last year. PGGM has now retreated from third-party management.

Global players offer impressive capabilities and global brands, putting smaller fiduciary managers under pressure. This will be the case in the Netherlands as Goldman Sachs Asset Management builds out its domestic presence following its acquisition of NN Investment Partners.

They and other players with scale, like the omnipresent BlackRock, can offer impressive private market deal sourcing through their international networks or (in the case of GSAM) a bank parent.

Few pension funds are among the elite that can do lots of things well. Some large funds will want to partner directly with a bigger Yamaha with a diverse, high-quality offering; smaller pension funds and fiduciary managers can still retain an edge by choosing from among the Steinways.

Either way, pension funds should still aim to be Steinways in what they can do well, particularly in acting as a well-governed countervailing power to outsourced investment managers and partners.