Robust central clearing is critical for millions of Europeans

Derivatives like interest rate swaps are now a central component of risk management best practice. According to a 2018 paper by ISDA and PensionsEurope, the percentage of hedged pension liabilities in Denmark, the Netherlands and the UK ranges from 40-60% of total liabilities. 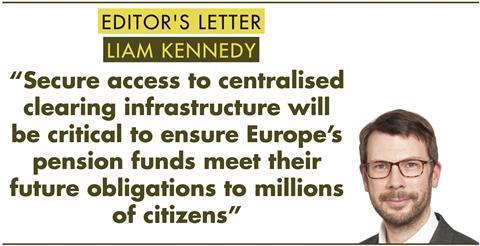 According to the Bank for International Settlements, the volume of centrally cleared OTC interest-rate derivative contracts rose from just a fifth in 2009 to almost two-thirds by 2018.

European pension schemes have been left in regulatory suspense. Since 2012 the European Commission has repeatedly exempted them from the obligation to centrally clear their interest-rate hedging swaps contracts.

In January 2022 ESMA, the European Securities and Markets Authority, wrote to the Commission concluding that funds – or pension scheme arrangements (PSAs) as they are referred to – are now operationally ready for centralised clearing, although ESMA backed a further one-year extension to 19 June 2023 for mandatory CCP use.

In addition to central clearing, the Commission also plans to reduce reliance on non-EU counterparties – namely in the UK. PSAs must also migrate from UK-based CCPs (like LCH) to an EU one (like Eurex) by 2025 following a deadline extension by the European Commission. Financial Services Commissioner Mairead McGuinness has signalled that this will be the last temporary equivalence exemption.

Some European pension funds already clear derivatives on an EU platform, although they may still have legacy positions on a UK CCP. As PensionsEurope pointed out in a March 2022 response to the Commission’s consultation on EU central clearing: this all comes at the cost of meeting initial margin calls, with the associated drag on investment performance.

From September this year, many institutional investors will also have to start to post initial margin for OTC derivatives in changes to the uncleared margin rules (UMRs) that will bring over 700 entities in scope.

According to the International Swaps and Derivatives Association (ISDA), the 20 largest market participants collected over $200bn in initial margin on non-cleared derivatives as at end-2020. Avoiding the need for initial margin by staying below the proposed €50m threshold will require careful exposure monitoring.

Eligible collateral in any case needs to be carefully managed, with the risk that counterparties will not be able to meet their requirements at times of stress. Although there were no actual defaults at the last major stress point in March 2020, future defaults cannot be ruled out and regulators are actively reviewing margin practices.

As ECB executive board member Fabio Panetta recently pointed out, banks need to diversify their risks to allow clearing users the flexibility to react to shocks. Indeed, banks do already offer counterparties collateral transformation in the form of repos or reverse repos to cover margin calls at times of stress.

But as PensionsEurope states in its recent response to the Commission: “These arrangements tend to be complex, expensive, and only for limited capacity. Most importantly, they are much smaller than the demand from PSAs. Furthermore, we do not believe they really work during times of stress when PSAs need them.”

Rather than supplying liquidity to banks, PensionsEurope is proposing a structural solution whereby central banks would supply liquidity to CCPs at times of stress in the form of government bonds, which the CCPs would convert to cash – temporary collateral transformation in other words.

As PensionsEurope points out, a European solution of this kind would effectively make EU-based CCPs the superior platform. While Pensions­Europe and others believe in CCP clearing for derivatives in the spirit of global regulation since 2009, they do worry that mandatory EU clearing will stifle competition.

In March, Panetta also pointed to the relatively small number of EU CCPs and the risk that presents when domestic authorities do not have sufficient control over clearing.

For their part, CCPs are looking at new technologies such as decentralised finance, or distributed ledger, and cloud-based operations to make themselves robust.

Current geopolitical tensions also presage potential market stress, which could even manifest itself as a sustained cyber attack, and a major test of the robustness of Europe’s financial system is impossible to dismiss. Secure access to centralised clearing infrastructure will be critical to ensure Europe’s pension funds can meet their furture obligations to millions of citizens.