Systemic risk may be underestimated

Underestimating the scale of systemic risk within the asset management industry is a mistake. For several years, macroprudential authorities including the International Monetary Fund, the European Central Bank and the Bank of England have argued that asset management activities are becoming systemically more risky.

Their latest evidence relates to three sets of problems. First, the credit quality of assets held by investment funds, insurers and pension funds has been declining, as the search for yield has pushed investors towards riskier assets.

Second, similarities among portfolios are growing, which the IMF contends could magnify the effects of a market sell-off.

Third, investors are under the mistaken impression that relatively illiquid assets held in UCITS and AFIMD funds can be liquidated quickly. This is partly a result of the lack of robustness of the fund frameworks but also arguably because of the recklessness of investors and managers.

The problem of liquidity mismatches has come to the fore in recent years, as the trading of several funds has been suspended owing to massive redemption requests.

However, asset management lobby groups have criticised the warnings about systemic risk. They insist that asset managers are not exacerbating the problem, because their clients are long-term investors who can withstand shocks.

Asset managers do not engage in maturity transformation. They do not face the challenge intrinsic to banking of matching long-term assets with short-term liabilities.

The lobbyists for asset managers contend that the suspensions in the trading of funds substantiate their case. Stress in those funds did not spread to the wider financial system. They have also called into question the evidence of growing systemic risk provided by macroprudential authorities (see Briefing, p65).

Such claims are based on a blinkered view. The nature of systemic risk makes it difficult to identify, let alone quantify. If it were straightforward the world would have averted the last global financial crisis. 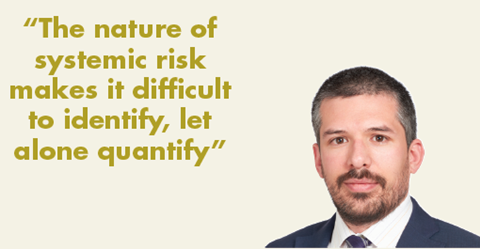 Authorities deserve praise for the extra monitoring and regulatory efforts they are making to ensure that asset management activities are not the source of the next crisis.

If anything, the level of systemic risk may be underestimated. Yield-starved investors have gradually replaced banks as lenders to the real economy. Their share of global debt is at record levels.

With low interest rates and relatively weak economic growth, the financial system is more fragile than before the previous crisis.