Assets under management at Belgian pension funds grew by 18% last year, largely as a result of asset transfers from foreign pension scheme providers, according to the Belgian financial services regulator.

There were 201 pension funds in Belgium at the end of last year, two more than in 2016. Membership grew by 4% to reach just over 1.7m, with almost a quarter of this increase at pension funds with cross-border activity.

One of the main aims of the new European pension fund directive, IORP II, is to increase cross-border activity. In the Netherlands, however, there are concerns that pension transfers to its neighbour are at least in part motivated by the appeal of more lenient regulation.

FSMA also reported that Belgian pension funds invested around three-quarters of their assets in mutual funds, principally equity and bond funds. They invested 11% of their assets directly in bonds and 9% in equities. 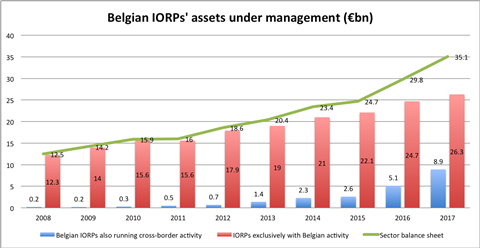