Ahead of the curve: Gold all set to shine during uncertain times

Which asset has no cash flow or yield, has a volatility similar to equities even though its long-term performance lags behind equities, and which has also had long periods of negative returns? Gold.

However, gold is not just another asset class. It is more akin to a currency. For almost three centuries the global economy operated on a formal or informal ‘gold standard’ which fixed currency values to a fixed quantity of physical gold. That changed in 1971 when convertibility ended. However, even today central banks see gold as a key part of their reserves and many millions of households hold gold as an important part of their savings. Since 1971, central banks have been able to create currency without limit, but gold is constrained by physical supply. This is key to gold’s appeal in more recent times, especially during the COVID-19 pandemic.

Gold’s price cycles have been long and deep. The ‘up’ cycles have been much larger in magnitude than the down cycles. Unlike other risky assets, a rising market has not been the norm, so the ‘up-to-down’ markets ratio over time is lower. When gold has really got going, the magnitude of the move higher has been spectacular. This matters now. Although the run-up in gold prices since 2018 has been considerable, if past cycles are any guide, the upswing could have much further to go in both length and size (see figure).

Higher inflation, and or, a weaker dollar, has appeared to be the key drivers of surging gold prices in earlier periods. The more recent surge appears to be linked to the collapse in real yields around the world. This trend has gathered momentum since 2018.

Gold and real interest rates are linked because lower rates tend to reduce the opportunity costs of holding gold as a zero-yielding asset. Real US interest rates (the Federal funds rate less consumer price inflation) have fallen from about +1% at the start of 2018 to -1% recently, a big move. This is supportive of a gold run.

Gold has a reasonable claim as a defensive hedging asset in weak market conditions. This was best supported during the latter stages of the dotcom bust (2002-03) and the financial crisis (2007-09). It also did well during much of the 1970s’ market troubles. However, it performed poorly in the early 1980s recessionary market falls because interest rates surged, which made bonds a more attractive investment. Thereafter, gold’s record is good. Its correlation with equities has tended to be consistently negative in times of market stress – making it part of the hedging toolkit in the choppier market conditions seen since 2018.

Where does that leave us today? The past few years have already seen considerable gold price strength. However, this does not look like a big move versus past upswings, so that is not a particularly big deterrent for investors. There are five main reasons gold is likely to continue to do well.

• There is more inflation uncertainty after the pandemic – money printing with substantial fiscal stimulus (fiscal QE) is creating fears of higher inflation. This boosts gold’s credentials. However, higher inflation is not that easy to bring about today, as Japan’s deflationary mire shows.  Interestingly, if central banks’ attempts to raise inflation fail and economies turn deflationary, gold’s case is not weakened because a deflationary environment is bad for risky assets, which increases gold’s defensive attractions.

• The dollar is likely to weaken further over time. This stems from several factors including the loss of its interest rate advantage and high valuations. The combination of high levels of money creation and dollar weakness is supportive of gold when it is seen as currency.

• Gold will continue to benefit from below-inflation interest rates. This big driver of gold’s appreciation since 2018 continues to remain supportive in our view as low interest rates are needed to help manage growing debt burdens. If inflation was to return, gold would do better given the ultra-low interest rates.

• The defensive attributes of gold are attractive. Yes, this year has already seen a bear market, with a dramatic recovery following soon after limiting upside potential. Economic, financial and market risks are high – deeply negative real interest rates, record highs in government and corporate debt, unprecedented central bank intervention in markets, and high geopolitical risk, all point to large speed bumps in markets. Gold’s attractions are good for those wanting more portfolio defences and the opportunity costs for holding it are low thanks to ultra-low yields. 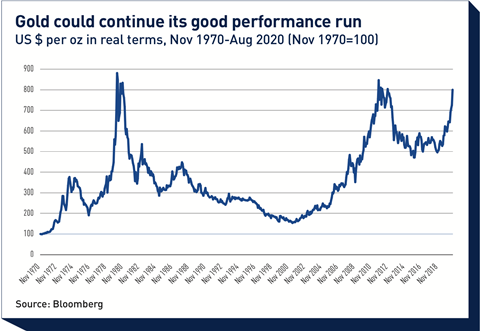 • Finally, the supply-demand fundamentals are supportive. Physical demand for jewellery has waned recently, but this has been offset by rising investment demand. Additionally, central banks have been raising their gold reserves over the last decade, and there are few indications that this will end. Against this increased demand, supply is slowly growing.

The key takeaway is that gold has an important part in portfolios as an asset that fits well in the current uncertain environment. Post pandemic, broader market risks from trends in inflation, currency and ordinary asset classes have increased, which will keep gold’s popularity high. The appreciation potential for gold is hard to quantify. However, its defensive qualities mean that outright return potential is less important.

Weighing against all this to some degree, is that gold remains a more volatile asset to hold than most. And this needs to be allowed for when comparing with other defensive portfolio strategies.

Tapan Datta is head of global asset allocation at Aon