A new pensions agreement between the Dutch cabinet and social partners last year requires nearly all Dutch pension funds to switch to a new defined contribution (DC) contract. It includes a lifecycle system and personal pension pots. The idea is to combine collective and individual components in one pension agreement.

There will also be an option for some defined benefit (DB) pension schemes which do not wish to switch to the new system. However, the plans are still at the consultation stage and legislation has to be finalised.

The agreement affects practically the entire private pensions market: the market share of assets of all DB schemes is just under 89%, with the balance largely in DC schemes, according to Netspar.

Wilse Graveland, head of fiduciary management and institutional solutions at Kempen Capital Management, says: “Altogether it’s a complex transition, with many stakeholders involved and new requirements for service providers. There is a more concrete direction for the future, but more time is needed to finalise details and prepare for transition.”

In the meantime, he observes, various platforms and pension funds are focusing on the development of the more flexible short-term pension system, in which individual components are incorporated into a collective pension system via a lifecycle.

“Fiduciary managers will have to show their innovative capacity and adapt their offerings,” says Paul Boerboom, founding partner of Avida International. “Most of them already have some form of DC experience and strong client relationships. I’m expecting them to adjust swiftly and co-create new offerings which fulfil clients’ needs, while minimising transition costs.”

APG, asset manager to Dutch civil service scheme ABP, bpfBOUW and SPW, pension schemes with a total €620bn under management and 4.7m participants, says the changes will affect the work of almost all its employees, involving changes to IT systems and redesigning processes.

Its programme for transitioning to the new system, subject to the specifics of the eventual legislation, envisages ‘no regrets’ design and execution (that is actions making sense whatever the final shape of the contract), to take place throughout the whole of 2022. With final legislation expected to be passed in 2023, preparation for implementation and the implementation itself are pencilled in for the same year, lasting until 2026. 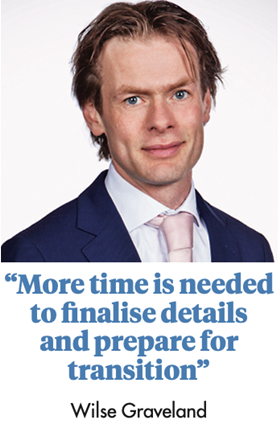 In practical terms, APG says changes to the way in which its clients’ assets are managed will include a new approach to their risk attitude. Under the new system, pension providers will have to ask participants not only whether they are aware of the risks they run but also how willing they are to take risks. Funds will then take this into account when deciding the risk attitude for their participants. This was not the case for DB schemes and requires new expertise, processes and systems to log the results.

APG also says that its asset management and pension administration will move closer together, so members can see what is in their personal pension pot and the effect the management of the assets has on their expected pension.

The key challenges include the need to explain the transition – that is, transferring assets from one pension system to another. Providers will need to explain to participants and employers how they calculated these amounts, and how the rights they had in the current system translate into the pension pot they have in the new system.

A further challenge is the relatively short time frame in which managers must complete the transition, particularly since so much is still uncertain. APG is now working on is to ensure billions of data entries, some of them decades old, are correct.

The duty of care towards clients is also a thorny issue. “We have this duty, but it is not yet clear what we can and cannot do,” a spokesman for APG says. “Participants may ask questions such as what they can do if their accrued pension is too low. We, as a pension provider, can only provide insight into what they have, but cannot advise. That is a thin line, and a reality the legislator needs to address.”

Meanwhile, the fiduciary market as a whole has seen further consolidation among providers, including the acquisition of BMO Financial Group by Ameriprise Financial, the owner of Columbia Threadneedle, and of NN Investment Partners (NNIP) by Goldman Sachs Asset Management (GSAM), both of which have been announced in the past few months.

“The size and commitment of a fiduciary manager are, and will remain, crucial to success as a strategic partner for pension funds,” says Graveland. “Existing fiduciary managers in the Netherlands need to invest continuously to improve and extend their service to clients.” 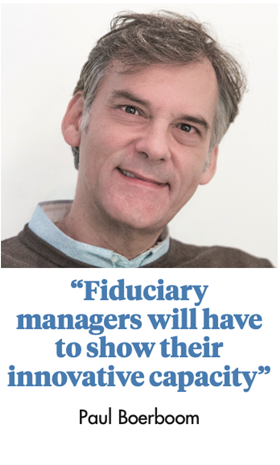 He says another trend is that fiduciary managers are starting to offer their services to a broader group of clients. “In the Netherlands, you see examples of the improved offering to private banking clients, adding extra client segments,” he says. This could include semi-institutional clients or additional regions. “In the case of Kempen Capital Management, this means the UK and Switzerland.”

Graveland says the standalone offering of specific fiduciary management solutions to clients who are asking only for a specific service and/or asset class, for example illiquids, is also an interesting trend.

But how open will the market be to former players coming back? Ten years ago, GSAM managed about €10bn in Dutch assets, according to data supplied to IPE, but then largely disappeared as a significant player.

It is now reportedly planning to use its acquisition of NNIP to reposition itself in European fiduciary management.

Aegon is also bringing its subsidiary TKPI under the existing brand of Aegon Asset Management, in order to improve both service provision and its competitive position.

Boerboom says the market changes generally are positive, as there was clearly room for a few new competitors, since mandates have been divided between only a few players. “To my mind, client access is not an issue,” he says. “They buy a solid book of existing clients which is serviced by one of the top teams in the Netherlands. Obviously, existing clients need to be retained, and once the dust has settled, new clients can be on-boarded.”