Among the areas of focus for a pension fund looking to cut costs are the fees charged by its asset managers, usually as an annual percentage of assets under management, plus costs for other services. As part of a cost-cutting exercise, however, foreign exchange (FX) is often neglected. But as funds increasingly invest outside their home country, FX transactions are acquiring more significance because of the need to hedge foreign currency fluctuations. And these deals can carry hidden costs.

Hedging is carried out by external or in-house managers via the FX market, with the relevant exchange rates often determined by existing FX benchmarks. But these rates are not always the best available for the investor.

The London FX market is the leading market worldwide, partly because of the City’s banking expertise, and also because of its geographical position, since banks in London can deal with East Asia, Europe and North America in the course of the working day.

Pension rebalancing transactions through the London FX market – which carries 40% of global FX trade – are frequently executed using the ‘London 4pm fix’, managed by Refinitiv. This is the rate at which investors agree with their bank to exchange currencies to settle their accounts at the end of every day.

The 4pm fix produces a set of exchange rates calculated as the average at which FX trades take place on three FX exchanges (primarily Reuters) in a five-minute window centred on 4pm, UK time, every weekday. However, the way in which the benchmark operates has faced mounting criticism in recent years after collusion between traders from different banks, resulting in overcharging of institutional clients.

Regulators concerned
Regulators are also becoming increasingly concerned about market impact and possible manipulation around the fix: heavy trading just before the window – in order to execute orders – has led to spikes in prices. FX dealers often take a hedge position in anticipation of an incoming trade. This so-called ‘pre-hedging’ is a legitimate trading strategy and a way to potentially reduce market impact for the client.

By contrast, ‘front-running’ is where a dealer carries out a transaction with inside knowledge of a future transaction – such as an imminent client order – to their own advantage. While this is illegal for executing banks, it is known that FX arbitrageurs do read signals in the market from the 4pm fix, to make money to the detriment of investors.

In 2015, the Refinitiv benchmark window was extended to five minutes, from its original one-minute duration. The idea was to reduce the incentive for front-running, as a longer window means any one action is likely to have a relatively small effect.

However, in 2017, a US federal jury convicted Mark Johnson, former global head of foreign exchange at HSBC, of wire fraud (fraud or attempted fraud with the aid of some form of electronic communication) and conspiracy for front-running a $3.5bn client order in 2011.

In what is still a blurred area – is a spike in price a result of pre-hedging or front-running? – the acid test is whether the price of an FX transaction is in the client’s best interests, or the bank’s self-interest, says Jim Wyatt, co-founder in 2016 of the independent quantitative FX surveillance firm Raidne.

But sometimes legitimate pre-hedging can still be detrimental to investors, as it has the effect of pushing the price against the client. It was to mitigate such an issue, among others, that Raidne invented its Siren FX benchmark. It says the new benchmark will bring significant improvement – and savings – to the buyside by reducing the cost of FX execution, through a fairer and more transparent benchmark construction.

Walton was previously head of the currencies and rates quantitative strategies team at Morgan Stanley. Wyatt previously founded Bio, an operational change and transformation specialist in 2003. The pair became friends after meeting at a National Childbirth Trust class.

The importance of understanding costs

ClearGlass Analytics collects data on how much its clients are charged by providers (mainly asset managers). It checks and analyses the information, returning it to clients in a form that enables them to make better decisions.

Data is collected using the standardised templates originally created by the UK’s FCA as part of its cost transparency initiative (CTI). 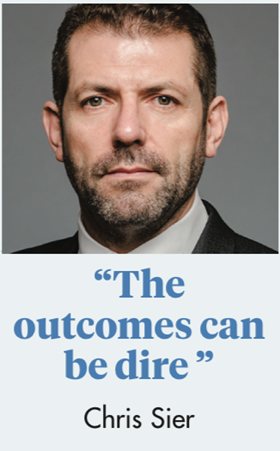 Chris Sier, founder and chairman, ClearGlass Analytics, says: “For small defined benefit schemes, despite comparatively simple asset allocations, the outcomes can be dire  – up to 263bps of cost, with -12% performance.”

And for big schemes, he says, cost reduction is equally important.

Robert Waugh, CIO, RBS Group Pension Fund, has said that a huge exercise started in 2010 to establish the fund’s total costs has led to a cost reduction from 53bps to 23bps, as a percentage of assets under management.

He considers that half the savings have come from better negotiations with managers because of the ability to identify their total costs.

Sier observes: “Reducing cost and improving performance is absolutely fundamental, especially as the impact of any cost reduction on a like-for-like basis compounds over time.”

He adds: “Anything that impacts on either or both explicit and implicit costs can therefore have a significant effect on both cost and performance, as they are two sides of the same coin. So on a like-for-like basis, a cost reduction of X means a performance uplift of X.” 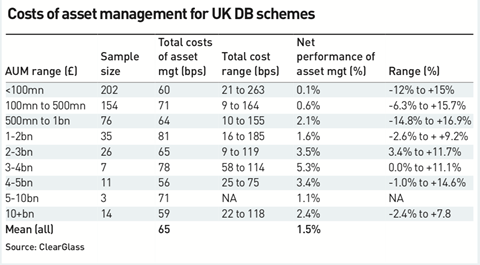 Siren 4pm is specifically designed as a rate that can be dealt against. It takes underlying FX mid-rates – approved by the UK’s Financial Conduct Authority (FCA) – from over 13 major venues and snaps the mid-rate in 70 currency pairs, each second, within its price construction. It then uses an optimal execution algorithm over a 20-minute window.

“This allows investors to explicitly participate in a large proportion of that pre-hedging activity, which means they experience lower market impact when compared with the 4pm fix,” says Wyatt.

Siren is administered by benchmark administrator New Change FX which is authorised and regulated by the Financial Conduct Authority.

Its use of an ‘optimal execution algorithm’, which starts with tranches of smaller-sized trades, also makes it more complex for FX speculators to identify the trading signals generated by benchmark-related activity. This reduces the ability for arbitrageurs to leap in for a risk-free profit to the detriment of investors.

Sachdev is also a councillor for Hertsmere Borough in the UK, and has recently been given responsibility for overseeing the council’s finances as the executive portfolio holder. As such, saving money which could be better used for local services is one of his prime concerns.

Significant role
And foreign exchange (FX) rates, which determine the amount any institutional investor has to pay to hedge assets held in foreign currencies, play a significant role in this housekeeping exercise.

The UK Local Government Pension Scheme owns £276bn (€321bn) worth of funds. “If all local government pension schemes used Siren, there could be potential savings of £40m per year,” says Sachdev. “There are around 400 local authorities, which means on average, each would have £100,000 a year to spend on extra services.”

Jamie Walton, co-founder of Raidne, says that at current savings of $500 per million dollars traded, asset managers who want to improve outcomes for investors should have a Siren savings evaluation at the top of their ‘to do’ list for each fund. “This would certainly be following the spirit of Principle 9 of the FX Global Code and MiFID II’s best execution clause,” he says.

Raidne provides the Siren savings spreadsheet that allows for any fund to evaluate, based on historical data, the amount potentially saved had the managers switched benchmarks.

Sachdev says pension funds should be asking their fiduciary managers:

• What FX benchmark are you using, and why?
• What other benchmark could you be using?
• When was the last time this was reviewed?
• Why do you like a longer observation window?

Sachdev says: “It is a carrot-and-stick situation. The carrot for local authority pension funds is that with pressures on finances, there is money waiting to be taken off the table by using a more transparent FX benchmark. The stick is that trustees might be subject to legal action if they are not acting in the best interests of their members.” 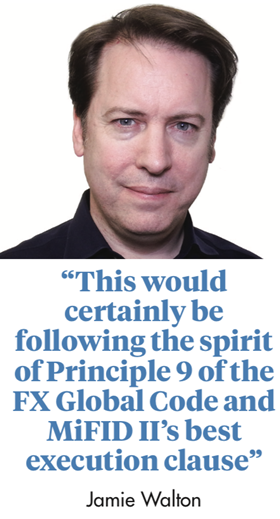 Chris Sier, founder and chairman at ClearGlass Analytics – which analyses the full costs of investing for clients – says, “I can see a time when pension funds will want to know which FX benchmark their managers, or other direct/indirect suppliers of FX services, are using.”

He adds: “From a ClearGlass perspective, developing a list of which manager uses which index, such as Siren vs 4pm fix, would be easy, given our coverage, and would likely be materially useful to pension fund trustees as a further characteristic by which to assess managers.”

Institutional investors do not pay for Siren; Raidne licenses the benchmark to user banks for $1 per million-worth of trades.

Eight of the world’s top 10 FX banks have said they will offer Siren based on customer request, thereby enabling asset managers access through existing relationships. Three banks are already at a stage where they can trade it.