Briefing: Why gold is different

Why does gold behave so differently from industrial metals and, indeed, most commodities in general? Despite the obvious contrasts – such as its shininess and its use in jewellery – it is not immediately clear why this should be the case.

Industrial metals tend to go up in price when the global economy is doing well. In that sense, they can be seen as a play on economic growth. For that reason, John Reade, chief market strategist at the World Gold Council, a body that represents the gold industry, describes them as “very much a one trick pony of industrial production growth”.

Of course, many will simply observe gold’s typical behaviour and act accordingly. If things are getting difficult they may well shift a higher proportion of their assets into gold.

But to truly understand the trends, it helps to ask the ‘why’ question. Why does gold behave in such an apparently peculiar way? Hopefully, understanding the dynamics of gold better should benefit those who want to use it in their portfolios.

One clear difference is what could be called gold’s characteristic as what could be called quasi-money. This may, at first glance, appear like one for the history books but Tapan Datta, head of asset allocation at Aon, makes the point that it remains important today. “It is still very much a parallel currency. A store of value. And those attributes are still very much with us.” 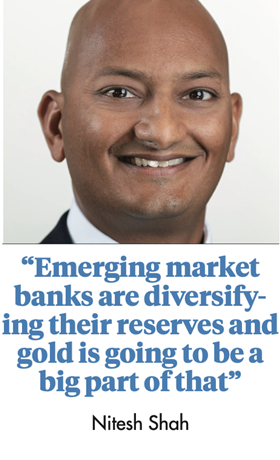 Not only do developed economy central banks hold substantial amounts of golds in their reserves, but the amount is increasing substantially in emerging markets. Nitesh Shah, a commodity strategist at WisdomTree, an exchange-traded fund provider, says many emerging market central banks are increasing their gold reserves to bring then on par with those in developed economies. “Emerging market banks are diversifying their reserves and gold is going to be a big part of that,” he says. In some cases, such as China and Russia, the countries involved are also gold producers themselves.

Jewellery can also to a substantial degree fit into the category of gold as a store of value. Although it clearly has aesthetic appeal to many it is also to a large extent held as an investment asset. This is particularly the case in developing countries such as India and China. “In many societies, gold still remains the key source of value,” Datta says.

A characteristic that allows gold to play a quasi-monetary role is what John Reade calls its high “value density”. In other words, each unit of gold is worth a lot relative to its weight. As a result, the storage costs are relatively low, as a quantity with a high value can be stored in a relatively small space. In contrast, industrial metals, and even silver, have a much lower value density so the storage costs are much higher. 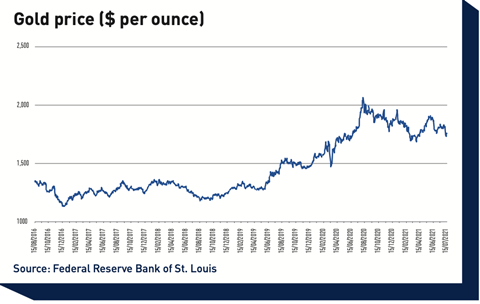 The other set of factors that make gold different from other commodities relate to its supply and demand characteristics. Relative to the amount of gold stocks already in existence it its processed form, the flow of gold is relatively low. “The stock-to-flow ratio of gold relative to other metals is very different,” says Shah.

In fact, Reade estimates that total stocks of gold are equivalent to decades of supply. That means it is generally a low-volatility asset class.

The significance of these characteristics for pension funds is not straightforward. Just as gold becomes a more significant asset class at some times rather than others, its appeal depends on the particular pension funds involved.

Datta points out that gold can play the role of a strategic diversifier to pension fund portfolios. “You can dial it up or down, depending on how nervous you feel,” he says.

However, in practice it is likely to appeal most to those funds that are relatively immature or have relatively heavy equity weightings. “It’s typically held by those who have a significant amount of equity risk in their portfolios and are looking for efficient hedges or they have got a view around inflation or real interest rates,” Datta says.

There are times when gold could be used as a tactical play but that is less common. For example, Shah makes the point that gold generally does well when the dollar collapses or bond yields collapse. So it could, in principle, be used when such eventualities are considered likely.

The peculiar characteristics of gold mean that it is an asset class that can play a useful role at the right time and in the right place. Determining when such conditions arise is the difficult challenge. 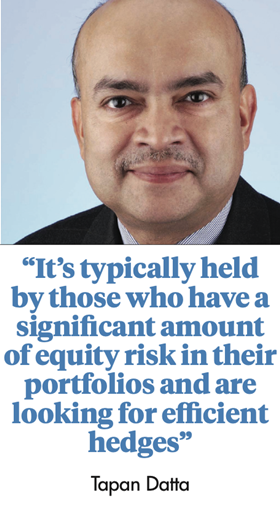 For asset owners, it also depends to a large extent on the existing characteristics of their portfolios. “It narrows the catchment to a sub-set of pension funds,” says Datta.