Shared pessimism
The next wave of COVID-19 has come to pass earlier than expected, largely due to new variants. The UK is hard hit, being sensitive to variants Alpha, Beta and Delta. The EU is next in line, with the Netherlands, Spain and Denmark in the forefront and Delta playing a leading role, but other member states are right behind. There is no sign of the next wave in the US yet, but it is sensitive to the variants Gamma and possibly Alpha, which plays a role in Canada. The number of new injections is falling to a level insufficient for herd immunity. Japan’s vaccination campaign started late. The vaccination rate is still quite low and the country is sensitive to Delta.

Meanwhile, domestic economies are opening up to accommodate the summer holiday season or the Olympic Games in Japan. Politicians look unwilling to revert to severe restrictions before September. Developing countries remain at a very low level of vaccinations, creating good conditions for the development of more variants.

Asset allocation
Net equity sentiment continues to trend down from a high level. Inflation is threatening to make a comeback and increasing risk from COVID-19-induced restrictions does not help. Net bond sentiment is also falling, although there is a rebound, possibly a correction, for EU bonds. The best explanation for these two simultaneous developments would be political risk, in particular the new wave of virus contaminations, as other political risk remained largely unchanged.

The neutral view on equities has risen above that on bonds in most regions. There is now less uncertainty among analysts on the near future of equity than on expectations for bonds.

Country allocation
Japan’s bond sentiment figures have been a clear outlier for months, ever further away from the other regions. With that exception, expectations for bonds and equity remain closely correlated, ignoring significant differences between regions, such as higher inflation and a larger share of vaccine refusers in the US. 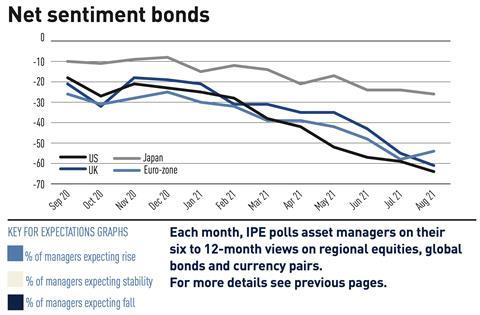