With a threat of nuclear war looming, Russia increasingly looking exhausted and desperate but unwilling to make concessions and a Russian default threatening, the world is again as dangerous as it was during the cold war. A default now cannot be compared with Russia’s de facto default in 1998.

Return of the bonds

This time, the money is there, but cannot be transferred. A default would gravely undermine trust in the Russian government, though. This would have consequences for its economic flexibility even after sanctions are lifted.

While policymakers think the relatively high inflation is temporary, sentiment suggests a harsher than expected increase in central bank rates.

Optimism on bonds has returned to the level of September 2021 after five months of slow but steady improvement. Japan is now less of an outlier. There is some hope that the ECB’s new considerations will mitigate the pressure for interest rate increases.

By contrast, faith in equity has taken a remarkable hit this month, likely driven by fears of lower growth due to the Ukraine war and higher expectations of central bank rate hikes. Neutral views are up sharply for bonds as well as equity. Only in the UK was the neutral vote on bonds stable.

Net equity sentiment is down for all regions but still highest in Japan and lowest in the UK. Analysts may believe that Japan’s growth prospects are better because it is further from the Ukraine war and not a NATO member. However, it is sensitive to higher energy prices. 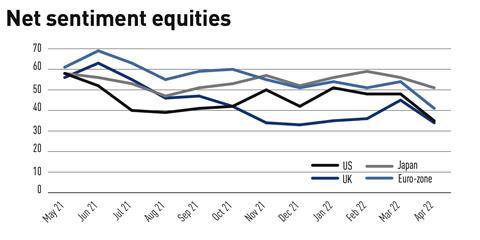