Ukraine is slowly gaining the upper hand, while Russia is still unwilling to make concessions. Putin is trying to play his nuclear card, a dangerous move, making himself the major obstacle to stopping the appalling Russian losses in people and equipment. Meanwhile, Zelensky lost points by creating an issue with Germany when he can’t afford to lose points.

There’s a war going on, you know

Hawks in the Fed have come around to the idea that inflation is real and not temporary, creating uncertainty over the speed of future rate increases. Those in the ECB (mainly Germany and the Netherlands) still have insufficient influence.

With faith in equity falling, bonds continue a comeback by default, rather than by conviction. Naysayers to bonds are close to crossing the 50% net negative line, while the negative net vote on equity is still above zero. Only in Japan is faith in bonds still slowly eroding, so that the gap with the other regions continues to close. Otherwise, scores are remarkably bunched.

Neutral views were generally down, except for UK equity. The general trend is perhaps a correction on last month’s sharp increase, as the market had priced in a quick peace for the Russian war that didn’t happen. If so, it is just realistic to admit that any fall of Putin cannot be predicted.

Net equity sentiment is down for all regions, the highest in Japan and now the lowest in the EU. Japan has the most neutral votes on bonds. Analysts may believe that Japan’s growth prospects are better because it is farther removed from the Ukraine war and not a NATO member. However, like the EU, it is sensitive to higher energy prices. Analysts expect the Fed to turn more aggressive in the course of the year.

All regions have a negative net bond sentiment. Japan is still an outlier, but on its way to join the pack. A possible explanation for the UK’s low net bond sentiment may be a loss of confidence in the Johnson government, as technically, the UK position is largely the same as that of the EU and the UK is not dependent on Russian gas. 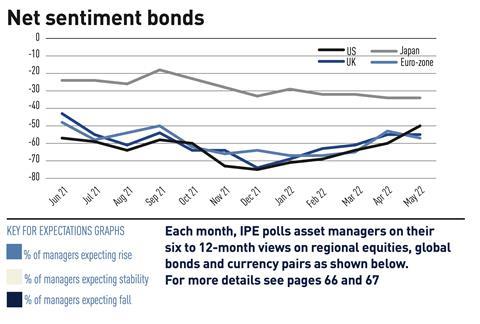