This includes setting an ambition of up to 5% of assets invested in projects that support local areas, the white paper stated, setting out the government’s intention to mobilise £16bn (€19bn) of LGPS capital for investments in such local projects – implying that too much is invested outside the UK.

It is also why Prime Minister Boris Johnson and Chancellor Rishi Sunak called on the UK’s institutional investors last summer to seize the moment for an “investment Big Bang” to boost Britain’s long-term growth.

With a 5% target of assets invested in projects that support the local area, the UK “will harness the power of public procurement to support communities, moving away from the complex EU rules-based approach that was designed first and foremost to facilitate the EU single market, and adopting instead a new simplified approach that prioritises growth and productivity in the UK”.

The government has already introduced a policy that allows smaller contracts to be reserved for UK suppliers and will legislate to put social value at the heart of government spending – weaving a thread of social improvement and civic responsibility through the UK government’s £300bn annual expenditure on procurement, it said.

“The paper is evidence of the willingness to explore illiquid investments”

Tracy Blackwell, CEO at Pension Insurance Corporation (PIC), welcomed the white paper and agreed that the government cannot level up the UK on its own; it will rather have to work in partnership with the private sector and with long-term investment from the financial services sector.

“We are already seeing billions of pounds being invested into areas like social housing and urban regeneration from long-term investors. However, to enhance this flow the government needs to ensure that financial regulatory reform doesn’t end up slowing or stopping the flow of investment into our cities and towns and draining the life from the levelling-up project.”

Blackwell was referring specifically to Solvency II, a piece of insurance regulation which – if reformed appropriately and with focus – could free up £20bn of fresh investment in the UK economy this decade.

Sarah Gordon, CEO of the Impact Investing Institute, who also welcomed the paper’s publication, said that “there is an urgent need for transformational investment that tackles regional inequalities and improves people’s lives”.

She said: “We believe that responsible private investment in under-served places – place-based impact investing – will have a critical role to play in delivering the levelling-up agenda and fulfilling the ambitious aims of this white paper.” 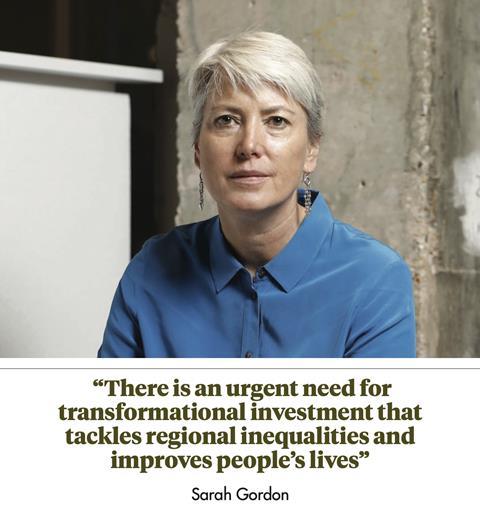 The leveraging of private capital across policy areas and sectors, she noted, will be an essential part of achieving these ambitions. She expects the UK government to play a decisive role in facilitating this.

It can do so by using public investment to catalyse institutional investment in historically under-served regions of the UK and supporting local authorities to engage with institutional capital, Gordon said.

The new 5% target for local investment by council pension schemes has been a central recommendation of the institute’s Place-Based Impact Investing programme since its inception and was a key call to action from its 2021 white paper ‘Scaling up institutional investment for place-based impact’.

“This move will make it easier for pension schemes to consider the real opportunities presented by investing for impact in UK towns, cities and regions,” Gordon said. ”By putting their investments to work to address local challenges, pension schemes can achieve appropriate risk-adjusted financial returns that are compatible with their fiduciary duty while enhancing local resilience and improving people’s lives,” she added.

As well as developing a more flexible and better regulatory model for business outside the EU, the UK government is also set on reforming rules restricting investment from pension funds and others so that more money can flow into long-term asset funds.

Levelling up requires mobilising previously underutilised sources of capital. “That is why we’re using the tax system to incentivise private sector investment, through Freeports, Enterprise Zones and the Super-deduction,” the white paper said.

Callum Stewart, head of DC investment at Hymans Robertson, said: “Through the creation of new long-term asset funds, schemes will be able to access investments that could improve returns net of costs and charges over the longer term. The paper is evidence of the willingness to explore illiquid investments.”

Stewart said this would provide a “vital opportunity” to improve financial outcomes and would work to remove any remaining barriers preventing defined contribution (DC) schemes getting the best for their members.

He added: “Although costs and charges are likely to be higher than most existing DC funds, we continue to believe that in this instance it’s possible to pay more and get more for DC savers.”