• What is the likely impact of the crisis on the credit markets?
With the world facing a global economic downturn it should be no surprise that many businesses are facing bankruptcy. The baseline case from the International Monetary Fund (IMF) suggests a fall in world output of 3% in 2020 – making it the worst downturn since the Great Depression of the 1930s. If it takes longer than expected to quell the pandemic, and lockdowns continue, the impact is likely to be far more severe.

To make matters worse, problems in the oil sector are being transmitted into the high-yield market. The oil price has plummeted – mainly owing to the slump in demand – and many US shale producers have borrowed heavily in high yield.

Other sectors that look vulnerable include airlines – although they will lobby for government bailouts – and aerospace. Sectors which may do well include food production and distribution as well as pharmaceuticals.

Under such circumstances it should not be a surprise that bond funds have suffered massive outflows. Data from Morningstar showed big fund families, such as Fidelity and Vanguard, hard hit by redemptions.

No doubt asset managers will make their default claim in such difficult times. That they can use their skill to select the good credits and avoid the bad ones. But although this may work for some it cannot save the sector as a whole. Its main hope probably rests on monetary intervention propping up the markets.

The IMF plans to publish a study of the credit market during May in a special chapter of its Global Financial Stability Report. The first chapter of the report, published in April, already warned of credit markets seizing up.

• What is the likely path of inflation?
Rollercoaster ride is an over-used expression in relation to market turmoil. But in relation to the price level – both down and up – it could prove an apt metaphor.

The immediate impact on prices – at least for most things – is sharply downwards. Prices have slumped in line with the economic shutdown.

The longer-term outlook is less certain. For one thing, the supply of many goods could be reduced as a result of the interruption to productive activity. That, all things being equal, would put an upward pressure on prices.

There is also a risk that the injections of liquidity into the economy could trigger inflation. This was of course predicted in the wake of the first global financial crisis in 2008-09 but it failed to materialise. However, there are reasonable grounds to argue that this time really is different. For example, the balance sheet of the US Federal Reserve increased from $4.3trn (€4.0trn) in the first week of March to $6.6trn in the third week of April (see figure). 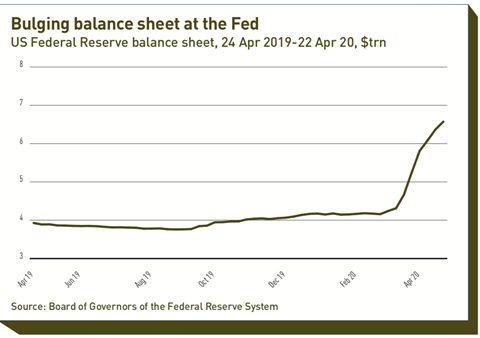 At the least, the high level of uncertainty in relation to the price level poses a challenge to pension funds in terms of the assumptions they use. The value of both invested assets and future liabilities look set to be harder to ascertain than during an era of price stability.

• Will investors shy away from equities?
The slump in equity markets in the first few weeks of the pandemic unnerved many. In many countries, allocations to equities are low in any case so the recent experience of the asset class is only likely to reinforce their stance. Members of defined contribution (DC) pension schemes may not look favourably at any shift in asset allocation towards stocks.

Asset managers themselves were certainly nervous. The Bank of America Lynch Global Fund Manager survey for April showed average cash levels jumping from 5.1% to 5.9% – their highest level since the 9/11 terrorist attacks of 2001.

More puzzling, at least at the time of writing in late April, was the partial rebound in equity prices. There are several reasons for such a correction but it is not yet clear what is responsible. For example, investors could have become more optimistic about the prospects for a relatively rapid recovery but that does not square with the economic data. The injections of liquidity may have pushed up prices.

In any event, investors of even a moderately nervous disposition will be wary of equities for a while.

As it happens, the standard argument was already questionable, even before the pandemic, as the average rate of emerging market growth had slowed. Even in relation to the giants of the sector, India and China, questions were being raised. The accuracy of India’s GDP figures was being question while China, although still growing relatively fast, was slowing.

But, whatever the situation before, now is clearly worse. The IMF forecasts an average fall in output of 1% for emerging market and developing economies this year. For many emerging economies it is the worst performance in decades.

Such a contraction still sounds relatively good compared with, for example, an expected fall of 7.1% in the EU’s output. But there are several transmission mechanisms through which emerging markets could get into further trouble. For instance, a sharp fall in demand is likely to hit exports. Commodity producers look to be particularly hard hit.

Then there are the changes in financial conditions which could have a more direct impact on investors. The emerging markets have already suffered huge capital outflows including a high proportion from portfolio investors such as pension funds. Widening sovereign spreads could also make it harder for many emerging economies to meet debt repayments, therefore the risk of default is substantially higher.