Changes in legislation like the UK’s Consumer Rights Act 2015 have led to an increase of class actions led by pension funds as they seek to recover investment losses.

As the roll call of household names which have been hit by class action claims – Volkswagen, Facebook, and Tesco, to name a few – gets longer by the day, pension funds seem to be more comfortable about their involvement in this form of litigation.

Most of these claims are still being filed in US courts because of the legal framework helps facilitate them and because many of the companies are American.

Even so, European pension funds are seeing more of the action.

“Over the past five years, institutional investors in Europe have been increasingly willing to become active,” says Jeroen van Kwawegen, partner in the New York office of law firm Bernstein Litowitz Berger & Grossmann (BLBG). “European investors are in some ways in the driving seat behind the litigation because they are seeing such big losses.”

He points out that some European pension funds have much greater net assets than their US counterparts, partly because of mandatory contributions and their defined benefit status.

Furthermore, retirement systems in the US are run on a company or state, rather than federal, basis. That means they have fewer participants than their European counterparts. The latter are often industry-wide schemes or cover public sector employees across an entire country.

And, says van Kwawegen, European pension funds have a more holistic approach: themes such as sustainability and environmental, social and governance investing are near the top of their agenda.

Increasingly, therefore, investors are starting to use class actions as a corporate governance tool as well as a means to recover monetary losses.

“We see litigation as a way to engage with a company,” says Hans Ek, BLBG’s senior adviser for European investor relations. “So-called ‘punishment litigation’ is a way to recover losses, but our clients might want to stay invested. Negotiating a settlement means they can demand improvements in governance which help reduce risk.”

He suggests that using litigation this way can help level up cultural differences between European countries in terms of a pension fund’s influence over company governance.

Ek – formerly deputy CEO and head of corporate governance, legal, sustainability and staff at SEB Investment Management – says: “If you are a Scandinavian pension fund and have a question about risk in a local investment, you ring the company chairman and get a meeting. So litigation is not necessarily needed in that case. But, in other countries, it can be of use because you do not have the same informal contact.”

One reason that UK – and other European – pension funds might have been reluctant to take companies to court is that it may reflect badly on them, says David Scott, partner with law firm Scott+Scott.

“There has long been a fear in the pension fund industry that trustees who are trying to get money back from a company are anti-company, passing judgement on wrongdoers,” he says. “But this is an opportunity to collect money.”

In any case, for some claims, judgement may already have been passed by authorities other than the courts.

Five banks – Barclays, Citibank, Royal Bank of Scotland (now NatWest), JPMorgan and UBS – are being sued in the UK for the unlawful rigging of foreign exchange markets by some of their employees between 2007 and 2013, which damaged a large number of financial institutions.

But before the action had first been filed, the banks had been fined both by the UK Financial Conduct Authority, the European Commission and the US Department of Justice. 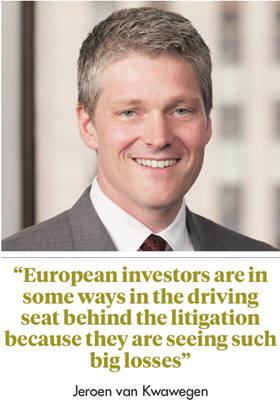 The claim is being brought through the UK’s Competition Appeal Tribunal (CAT) under the Consumer Rights Act 2015 (CRA), which made it possible to initiate ‘opt-out’ class actions for breaches of competition law.

In this fraud, pension fund clients using the banks’ exchange rate services had been uniquely targeted. “The predictability of the funds’ cash flow, with the same amounts of money coming out at the same time each month, would have made pension fund transactions an easy target for the conspirators, who were colluding with each other to the detriment of the pension schemes,” says Scott, who is leading the claim, having successfully led a similar claim in the US.

Michael O’Higgins, former chair of the UK’s Pensions Regulator (TPR) and current chair of the Local Pensions Partnership (LPP), has filed the claim. “The question is not, why would you bring a claim in the courts, but, why wouldn’t you?” he says.

An important aspect of the CRA is that it requires third-party funders to support claimants. These entities take a percentage of any payout, but shoulder the legal fees, regardless of the case’s success.

The advent of third-party funding from investment firms such as Therium – which is supporting the claimants in O’Higgins’ foreign exchange fraud lawsuit – has made legal action more realistic for investors.

It is being increasingly used across Europe, with funders especially active in the Netherlands, Germany, the Nordic region and Spain. 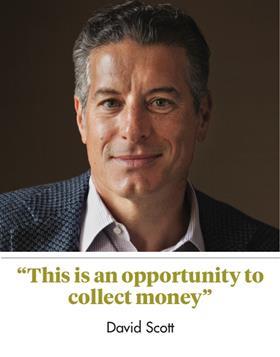 As with US class actions, any institution which has allegedly been damaged by a defendant can sign up after the court has issued its final ruling.

Again as in the US, classes in the UK are formed on an opt-out basis, but only for UK institutions. Non-UK entities must opt in – for example, in the case of the foreign exchange fraud, they must opt in and register on the claim website www.ukfxcartelclaim.com to participate.

“The act changed the balance of risk and for a pension fund, the process is risk-free,” says O’Higgins. “It also allows a case to go ahead without all potential claimants being identified before the judgement, so there is no need to sign up in advance, unless you are non-UK domiciled .”

Not only is it a case of having nothing to lose, O’Higgins suggests that pension fund trustees might be failing their fiduciary obligations – or just common sense obligations – to beneficiaries if they do not participate, whether as a plaintiff or a passive class member.

In spite of a legal framework that has not historically been particularly investor-friendly, European jurisdictions have notched up notable successes in recent years.

Royal Bank of Scotland agreed a £800m (€870m) settlement in the UK high court in 2016, to compensate investors who had subscribed to a rights issue just before the bank was bailed out, while in 2018 the Amsterdam Court of Appeal approved a €1.3bn settlement between the successor to the Fortis financial services group and investors who had suffered losses from the group’s collapse.

In Germany, interest in group lawsuits has increased over the past decade, as investor losses caused by company misconduct have mounted up.

“With the VW Dieselgate case and Wirecard case, the losses and destroyed market capitalisation have been rising exponentially,” says Marc Schiefer, a lawyer at TILP Litigation, which is about to initiate German proceedings against Ernst & Young, Wirecard’s auditors. “Claims against large institutions in Germany for potential wrongdoing in securities have not been just a flash in the pan. The awareness of investment funds regarding their duty to act for their investors and take an informed decision has increased.”

Pension funds could find themselves at the other end of a lawsuit if a recent case in Australia is anything to go by.

The Retail Employees Superannuation Trust (REST) recently settled a lawsuit brought by a member over a lack of information about climate change risk and any plans to address this.

As part of the settlement, REST agreed to:

• Adopt measures to achieve a net-zero carbon footprint by 2050;

• Enhance its consideration of climate-change risks when setting its investment strategy and asset allocation.

Other Australian lawsuits are in progress, including a class action against AMP Super for charging excessive fees.

This arose out of the Royal Commission on Banking Misconduct report of 2019, which found some funds were overcharging members.

Slater+Gordon, a law firm representing AMP Super members, states on its website: “We plan to launch a series of class actions against big bank-owned super funds that we allege have rorted the system [engaged in sharp practices] to boost their own profits instead of looking after members.”

But could member litigation catch on in the northern hemisphere?

Neil Purslow, chief investment officer at third-party funder Therium Capital Management, says: “The REST settlement won’t necessarily lead to a surge of these types of actions in other jurisdictions. Compared with the rest of the world, Australia is very investor-friendly and, by extension, member-friendly.”

He says Australia had also been through a Royal Commission on Banking which has shone a spotlight on certain practices in the Australian industry. “It remains to be seen whether there is a read-across to practices elsewhere and whether other legal systems will provide means for redress where that is the case,” he says.

Late in 2020, Google’s parent company Alphabet agreed a settlement with investors including Swedish default fund AP7 as lead plaintiff – after it had been sued for mishandling sexual harassment.

Alphabet committed to investing $310m (€251m) to improve diversity and inclusion, adopting a robust programme designed to prevent and address sexual harassment, misconduct and retaliation, and require board oversight of company culture, along with a number of other measures.

“For AP7, litigation is a tool for active ownership,” says Johan Florén, head of communications and ESG, AP7. “The main motivation is to enforce principles of governance and sustainability. Financially, there must be a positive result for our savers, but money is not the main driver.”

AP7 takes a proactive stance, regularly screening its portfolio for potential cases which are evaluated. If the conditions are right, a deeper analysis follows, and eventually engagement.

“We work actively as owners with all forms of ESG challenges, and different tools have different applications,” says Florén, “Alphabet was a clear ‘s’ case, which is uncommon for lawsuits – they tend to be ‘g’ related much of the time.”

“However, we understand – especially if we remain invested in the company – that it may be important to avoid a repetitive problem. When APG is acting as lead plaintiff and the interests of the class are aligned, it may be in the class’s interest to discuss improvement of specific governance problems tied to the securities fraud and the underlying misconduct, as part of the settlement discussions.”

He adds: “Participating in class-action litigation is part of our fiduciary duty towards our pension fund investors and their assets. As such, it is important to APG and we receive settlement payments to compensate for losses due to securities fraud as a passive class member. Because of the size of our investments, such recoveries can be meaningful.”