Ukraine & Russia: Asset allocation and investing in a time of war

It is a well-known fact that geopolitical events have no lasting impact on financial markets. However, Russian president Vladimir Putin’s decision to wage war on Ukraine has forced institutional investors to reassess their strategies. While stock market indices tend to recover fairly soon after the initial shock of a geopolitical event, the conflict between Russia and Ukraine has potentially wide-ranging consequences beyond a sudden spike in volatility.

The outbreak of the conflict has raised uncertainty to levels not seen in decades, both in terms of security and over the likely trajectory of the global economy. There is a sense of urgency in the industry to make sense of the new geopolitical and economic scenario, as investors try to deal with the practical and moral implications of Russia’s invasion.

“We have entered a new era, having witnessed an event that in geopolitical terms is as seismic as the fall of the Berlin Wall or 9/11. In this new chapter, a new Cold War may well become the nature of the relations between Russia and the West. As a result of this state of heightened tensions, it seems sensible to think that a kind of geopolitical risk premium will be embedded in markets,” says Mark Dowding, chief investment officer at BlueBay Asset Management.

It may be difficult to quantify this geopolitical risk premium, but Dowding points to higher spreads and higher volatility, as measured by the VIX index, as potentially permanent features of this new regime.

The downsizing of Russia’s exports of energy, fertilisers and other commodities as a result of Western sanctions is widely recognised as a driver of long-term inflationary pressures. This has many powerful implications, particularly for the European economy. 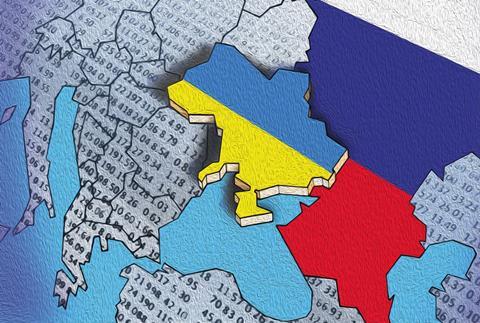 John Llewellyn, partner and co-founder of Llewellyn Consulting, the independent macroeconomic advisory firm, points out that a ban on Russian oil and gas exports would add 1% to global headline inflation alone.

“Because Europe is a net energy importer and is chronically over-reliant on Russian oil and gas, because of higher prices its national income is bound to fall relative to its GDP, which means Europe gets harder hit than the United States, despite the two economies being of roughly the same size,” says Llewellyn.

Guillermo Felices, global investment strategist at PGIM Fixed Income, also highlights the changing outlook for global economic growth. “The consequences of the conflict are clearly inflationary, as can be seen by the reaction of the energy and commodity markets. But until the outbreak of the conflict, the prospects for growth were positive. Now we are in a very different environment, where growth could suffer, particularly in Europe and if the conflict persists.”

The channels through which a protracted conflict could affect economic growth are several, according to Felices. One is imports, which become more expensive as commodity prices rise. The second is consumers’ purchasing power, which is already under pressure. Third, sentiment effects could weigh not just on corporate investment, but also on financial conditions. “I think these drivers are pretty strong, and will definitely affect growth especially in Europe if the war continues,” he adds.

He says: “Over the past decades, central banks always had the intrinsically impossible task of controlling both growth and inflation using only interest rates, but they managed anyway because the inflationary pressures were not that great.

“After the [COVID] pandemic, they hoped that the post-pandemic inflation surge would be transitory, which was perhaps a sensible assumption, and it looked like they would get away again with controlling inflation without killing the recovery. But now they are facing, at the same time, a huge and protracted rise in inflation, with workers demanding wage increases, and pressure on growth due to the conflict. They are between a rock and a hard place.”

“Some investors are selling Russian assets at whatever price they can get. Others are having to sell for technical reasons, so they are being hit for reasons that are independent from their decisions”

“Clearly, there has to be a fiscal response by governments, and there are some signs of this happening, with countries such as France acting to help families withstand the inflationary shock,” adds Llewellyn.

No time for bold calls

Considering the level of uncertainty, investors would be well-advised to stay invested and maintain their strategic asset allocation, until the situation becomes clearer.

However, there are key questions regarding asset allocation in the short to medium term. Christian Kopf, head of fixed income and FX at Union Investment, points out that the Russian invasion in February ushered in a new market regime, where the correlation between bonds and equities became negative. The correlation had been positive between the end of 2021 and the beginning of this year, due to the prospect of a tightening of monetary policy.

“Whether the negative correlation between equities and bonds will continue to hold, and investors can benefit from positive returns in fixed income, depends on the scale of the conflict and of the economic shock that the conflict will generate,” says Kopf.

Nevertheless, in mid-March, markets were still pricing in up to seven 0.25% rate hikes by the US Federal Reserve by the end of the year, and were expecting the European Central Bank to start raising rates as well in 2022, according to Kopf.

“Corporates have been innocent bystanders in this crisis and were in good financial health before the events. The environment might become more challenging in the months ahead and we might see earnings downgrades as a result, but so far we have not seen a ‘dash for cash’ by corporates in the aftermath of this event,” says Kopf.

If investors believe that the conflict will not spill over, it might pay to stay overweight, or at least neutral, in corporate credit, with the prospect of picking up attractively-priced primary issues in the near future. Furthermore, despite having announced the phasing out of its corporate bond-purchasing programme, the ECB is likely to step in if corporates need liquidity, according to Kopf.

Some emerging markets (EMs) are expected to suffer particularly from the crisis. Kopf says: “Higher energy and food prices will cause serious problems for countries such as Egypt, where people spend a greater share of income on food and energy. There may even be problems with physical access to food, which is a dreadful prospect. And central banks will have a hard time controlling runaway inflation. Some EM economies will be hit harder than others, but all will feel the pain, including China.”

EM economies that are net energy exporters, such as Nigeria and Oman, will see their fundamentals improve thanks to higher energy prices. But outflows from EMs may be generalised, putting pressure on the bonds of the countries that are outperforming as well, at least in the short term. In the medium term, oil exporting countries, such as Mexico, stand to benefit, says Kopf.

BlueBay’s Dowding also sees potential winners and losers from the crisis, both in emerging markets and the wider fixed income asset class.

He says: “There are segments of the markets that may look attractive. For instance, at one point in March euro investment-grade spreads widened to such an extent that investors were being over-compensated for holding credit risk. Credit beta looks generally more attractive than at the beginning of the year. But everything depends on the level of economic stress. As an investor, the best approach at the moment is to maintain a fairly flat book and look out for assets that might be dislocating, or for the new issuance that might be priced at a material discount.”

For PGIM’s Felices, this is not a time to make directional calls, but if the crisis escalates, the risk/reward equation favours US investments. “However, on a relative basis, European sovereigns and corporates are starting to look relatively attractive, considering the fact that the ECB is likely to support both segments, in order to avoid fragmentation between countries. The prospect of a harmonised fiscal policy is also a positive,” he says.

On the question of how to manage exposure to Russia, there seems to be a strong consensus among European investors. As has been reported by IPE, many institutions have sought to divest their holdings of Russian sovereign and corporate debt and stocks. This is for both moral and practical reasons.

Some asset managers and institutions had already divested their Russian holdings long before the invasion of Ukraine had begun. “We identified the fact that a war in Ukraine was a very tangible threat, and had marked Russia as a very high-risk country from an ESG perspective,” says BlueBay’s Dowding. “That means we had no Russian exposure prior to the crisis in our Article 8 funds. In certain emerging market funds, we had some benchmark risk in Russia, but we sold all our exposure to Russian government debt,” he says.

Union’s Kopf says: “We have been very vocal about not wanting to support Russia’s war by participating in primary market issues and secondary market purchases. At the same time, we do not want to engage in fire sales, and have advised our clients to find ways of keeping exposure to paper that may well recover in the future. On the other hand, there was no exposure to Russia in our sustainability-themed funds – to the Russian state at least.”

A much-debated topic has been whether the Russian state would default on its obligations to sovereign debt investors, having been hit by sanctions that included the freezing of its reserves of foreign currency and rating downgrades. As of mid-March, however, the country seemed to have averted a default, after delivering a key coupon payment worth over $110m (€110m) on two euro-denominated bonds. The situation would have been different had Russia paid in roubles, which might have been considered a technical default.

Marina Ryabokon, responsible for sales and trading in fixed income and emerging markets at CFE Finance, a European independent financial group specialising in trade finance, structured finance and emerging markets, points out that Russia’s total outstanding debt denominated in euro is between €40bn and €50bn.

She says: “This is not a particularly large figure. Furthermore, international investors had been underweight on Russia for a long time. The Russian state has indicated its willingness and commitment to make the payment and so have major Russian corporate issuers.”

However, investors eager to sell their holdings of Russian assets have faced a very difficult trading environment, Ryabokon says. “Some investors are selling Russian assets at whatever price they can get. Others are having to sell for technical reasons, so they are being hit for reasons that are independent from their decisions. The market is very nervous,”he says.

The outlook for emerging markets may be especially bleak, according to Ryabokon, but the impact of the economic sanctions imposed on Russia by Western countries will be felt across the board.

“The sanctions were imposed very quickly but the global economy will take some time to digest their impact. One of the main consequences that can already be felt is that supply chains are broken, not just in the energy sector. Russia and Ukraine are among the largest producers of agricultural products, including fertilisers. In both developed and emerging markets, inflation was rising even before the conflict, and the sanctions can worsen the situation,” says Ryabokon.

“I think we may be underestimating the situation at the moment. There is a lot of uncertainty, but what is clear is that we are shifting to a new reality, one where global GDP could trend lower for some time.”