2
DB funding: Calm waters or the eye of the storm?

DB funding: Calm waters or the eye of the storm?

Our 2018 Pensions Accounting Briefing shows that the pension scheme deficits for Ireland’s largest defined benefit pension schemes fell by €1.4bn, or 40%, over the course of 2017 to €2.2bn at 31 December 2017. We estimate that the downward trend in deficits continued through 2018 and the aggregate pension scheme deficit of the companies analysed was fully eliminated in September 2018 before returning to deficit again.

The decrease in estimated deficits occurred largely owing to increases in bond yields, significant contributions and strong investment performance over 2017. The reduction in deficits was also the result of some liability management exercises during 2017. Financial markets were favourable for the first nine months of 2018, with further increases in yields and strong equity performance. However, market conditions have since been less favourable.

This is our tenth annual analysis of pension scheme finances. It is noteworthy that September 2018 was the first time since commencing our analysis in 2008 that the aggregate pension scheme deficit was eliminated. 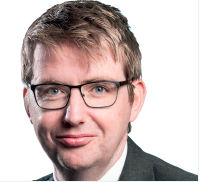 Our report covered 15 of the largest companies (by market capitalisation) listed on the Irish Stock Exchange and other exchanges that have defined benefit (DB) pension arrangements in Ireland. We also covered 11 semi-state/state-controlled companies with DB pension schemes that have published pension accounting information for their 2017 financial year.

Figure 1 shows how funding levels have changed in 2017 for the companies analysed. 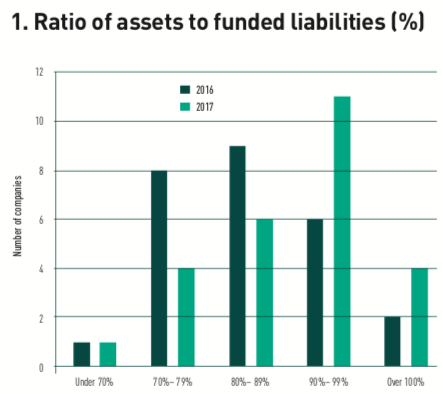 We have also considered the movement in the pension scheme balance sheet positions during 2018. Euro-zone and US equities performed well in the period to 30 September 2018. Global equities, as measured by the FTSE World index, were up about 8.4% in 2018 to the end of September.

On the liability side, high-quality corporate bond yields as at the end of September 2018 were higher on average than as at the end of 2017. These higher yields mean that IAS19 liability values have fallen during 2018 (as pension scheme liabilities are calculated by reference to these yields for accounting purposes).

We estimate that the aggregate pension deficit for the Irish funded schemes of the companies analysed stood at €400m as at 30 September 2018 (€2.2bn at 31 December 2017).

As the figure 2 demonstrates, there can be significant volatility in the level of deficits from month to month as equity values and bond yields fluctuate. Indeed, it is estimated that the deficit was fully eliminated in mid-September. 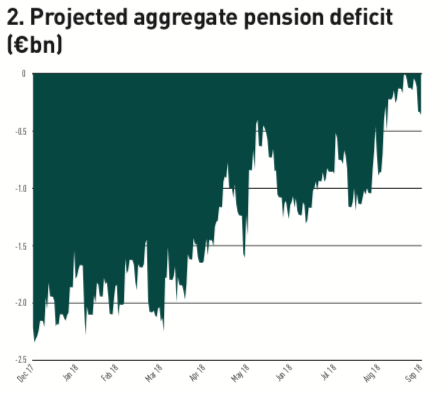 What have companies been doing to manage their pension commitments?

There were several examples of transfer-value exercises where members were offered transfer values (in some cases with enhancements in excess of the standard transfer value) to another pension arrangement in exchange for their accrued defined benefits.

The average level of exposure to equities fell from 41% in 2016 to 37% in 2017. The reduction is more significant when considered over a longer time horizon, with an average allocation of 59% in 2009. However, the exposure to equities remains high when compared with other jurisdictions. For example, it is 25% in the UK. 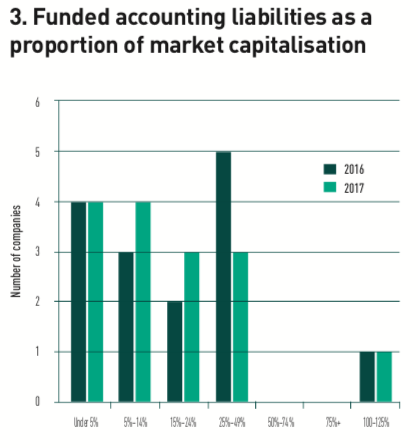 The companies analysed paid substantial contributions of almost €1.1bn to their pension schemes in 2017 which is broadly unchanged from 2016. It is clear that pensions remain one of the most significant costs for these organisations.

The discount rate is the key assumption used to value pension liabilities. Under IAS19 and FRS102, this assumption is based on the yields available on long-dated high quality (typically AA-rated) corporate bonds in the currency of the liability at the valuation date. These yields, and hence the discount rates, will fluctuate from day to day in line with market conditions. 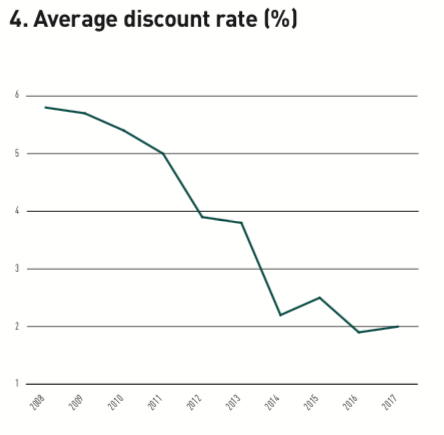 In figure 5 we have analysed the discount rate for companies reporting with December 2017 year-ends. 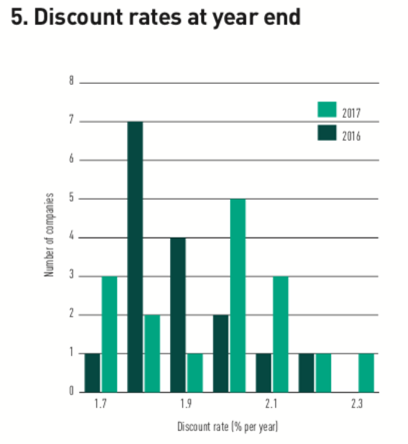 While, in theory, pension schemes with similar durations should be valued using similar discount rates at a particular point in time, in practice, the lack of a deep market in long-duration corporate bonds can result in different modelling techniques and some divergences in discount rates. A small change in the discount rate can have a significant impact on the balance sheet position.

The discount rates used as at 31 December 2017 have been charted against the disclosed durations and clearly shows some divergences in approach (figure 6). 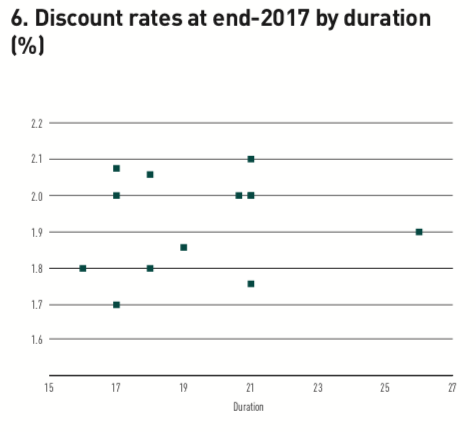 Source for all: LCP Ireland

Tomás Kirrane is an actuary at LCP Ireland. The 2018 LCP Ireland Pensions Accounting Briefing is available at www.lcpireland.com