Our 2017 Pensions Accounting Briefing shows that the average funding level of Ireland’s largest pension schemes remained static at about 85% over the period 2010 to 2016. That was despite contributions of almost €10bn over the same period and stock markets hitting new highs. This was primarily the result of the sharp and prolonged fall in euro-zone bond yields over the same period.

Estimated deficits in the companies analysed increased from €2.6bn to €3.6bn over the 12 months to 31 December 2016. This was primarily a result of the fall in yields on high-quality corporate bonds (used to place a value on the accounting liabilities) in 2016 which increased the liabilities. This was somewhat offset by the strong rise in assets (equities and bonds) in 2016.

Our report covered 15 of the largest companies (by market capitalisation) listed on the Irish Stock Exchange and other exchanges that have defined benefit (DB) pension arrangements in Ireland. We also covered 11 semi-state/state-controlled companies with DB pension schemes that have published pension accounting information for their 2016 financial year. 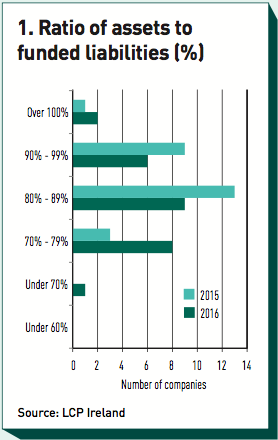 The average funding level for the schemes analysed decreased from 88% in 2015 to 85% in 2016. Figure 1 shows how funding levels have changed over the year for the companies analysed.

We have also considered the movement in the pension scheme balance sheet positions during 2017.

LCP estimates that the aggregate pension deficit for the Irish-funded schemes of the companies analysed stood at €3.3bn as at 31 October 2017 (€3.6bn at 31 December 2016).

As figure 2 demonstrates, there can be significant volatility in the level of deficits from month to month as equity values and bond yields fluctuate. Indeed, when deficits hit their lowest in June 2017, it is estimated that the aggregate pension deficit was only €900m.

We have seen continuing evidence of pension liability management exercises over the year. In some cases the accrued benefits for members were cut following agreement with the pension scheme trustees, while in others the schemes closed to future accrual. There were also several examples of transfer-value exercises where members were offered transfer values to another pension arrangement in exchange for the benefits accrued.

The companies analysed paid substantial contributions of almost €1.1bn to their pension schemes in 2016 (€1.2bn in 2015). It is clear that pensions remain one of the most significant costs for these organisations

The discount rate is the key assumption used to value pension liabilities. Under IAS 19 and FRS 102, this assumption is based on the yields available on long-dated high-quality (typically AA rated) corporate bonds in the currency of the liability at the valuation date.  These yields, and hence the discount rates, will fluctuate from day to day in line with market conditions.

In figure 5 we have analysed the discount rate for companies reporting with December 2016 year-ends.

While, in theory, pension schemes with similar durations should be valued using similar discount rates at a particular point in time, in practice, the lack of a deep market in long-duration corporate bonds can result in different modelling techniques and some divergences in discount rates. A small change in the discount rate can have a very large impact on the balance sheet position.

The discount rates used as at 31 December 2016 have been charted against the disclosed durations and clearly shows some divergences in approach (figure 6).

In 2015 and 2016 the International Accounting Standards Board (IASB) proposed some changes to the way liabilities are calculated under IAS 19. In short, while at present the balance sheet amount disclosed can be significantly less than the value of future contributions, the proposals would require a significant number of companies to disclose the higher amount with a potentially substantial impact on those companies’ balance sheets.

Exactly which companies will be affected is not clear and will depend more often than not on a ‘small print legal lottery’ of the detail in a plan’s rules. It is, however, likely that a significant number of DB  pension sponsors could be affected.

Changes were due to be finalised early in 2018 and then implemented with effect from 2019. At its meeting in September 2017, the IASB agreed to hit the pause button – at least for the time being. The IASB will carry out further work to assess the potential impact. The potential changes, however, have not gone away indefinitely and amendments remain a real possibility.

Tomás Kirrane is an actuary at LCP Ireland. The 2017 LCP Ireland Pensions Accounting Briefing is available to download at www.lcpireland.com