1
Deficits: All set for a bumpy ride

Choppy markets, economic uncertainity and Brexit are among the issues faced by UK sponsors and trustees

The start of 2019 was marked by volatility and uncertainty. Brexit, the US government shutdown and US-China trade relations have all depressed markets, but will the slowdown continue?

After a decade of economic recovery and strong asset returns, Kerrin Rosenberg, UK CEO of fiduciary manager Cardano says: “The tide might well now be turning. Many financial observers, including us, expect global economic growth to slow. As the economy moves from expansion to slowdown, profits decline, inflation falls and central banks and governments are expected to use monetary and fiscal policy to stimulate. Into an economic slowdown, traditional growth assets like equities, credit and property do poorly, and high-quality government bonds do well. Pension fund deficits will grow, potentially significantly.”

Simon Bentley, head of LDI client portfolio management for BMO Global Asset Management, also sees: “pension fund deficits struggling to improve during 2019.” He says: “Most economies appear to be in the latter stages of the economic cycles so growth asset returns for 2019 are likely to be modest. At the same time, the UK faces significant headwinds which could keep interest rates lower for longer, negatively impacting the liability side of the pension scheme balance sheet.”

Torrid time
Indeed, UK retailers are having a torrid time. If current economic conditions persist, Penny Cogher, partner in law firm Irwin Mitchell, warns: “We will see many companies struggling to keep afloat, let alone having cash to pay to their DB [defined benefit] schemes.” She adds: “This will clearly have a knock-on effect on pension schemes as in the worst-case scenario they are knocked into the Pension Protection Fund and in the best-case additional contributions from employers dry up.”

On the upside, Steven Dicker, chief actuary at PwC, says: “Schemes have continued to reduce their equity exposure and some have added equity downside hedging which may help reduce volatility a little.” 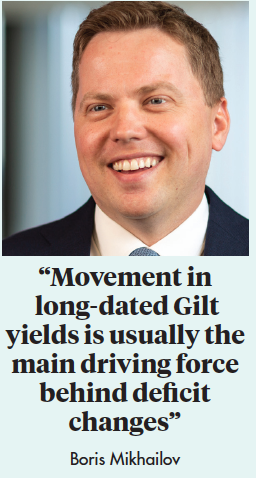 But “even a well-hedged pension scheme with a deficit can expect to be affected,” says Boris Mikhailov, investment strategist, global investment solutions, at Aviva Investors. He explains: “Movement in long-dated Gilt yields is usually the main driving force behind deficit changes, with schemes still typically being significantly under hedged when it comes to their interest rate exposure. For a typical scheme, funding levels are likely to continue being a bit of a rollercoaster ride, with a bumpy path expected for Gilt yields through the year.”

Cogher agrees on the impact of Gilt yields: “The level of exposure pension scheme deficits have to the financial markets is demonstrated by analysis conducted by Barnett Waddingham which indicated that a 0.5% fall in bond yields in 2017 would have pushed the aggregate deficit of the FTSE 350 up to £85bn (€97bn).”

For 2019, Mikhailov says: “In terms of Gilt yields, some of the contributing factors to volatility in 2019 will be the reduction in issuance of index-linked Gilts by the Debt Management Office as a proportion of total new issuance, coupled with the increased demand for conventional Gilts from the Bank of England as it reinvests maturity proceeds from its Asset Purchase Facility. As well as contributing to volatility, this dynamic is also expected to keep downward pressure on real and nominal Gilt yields.”

He says: “Uncertainty around the outcome of the House of Lords Economic Select Committee’s recommendation to change the RPI measure of inflation can also be expected to influence volatility in real Gilt yields.”

The Brexit effect
Brexit is a particular concern, in whatever form it takes, it is likely to have a negative impact on UK economic growth.

Bentley warns: “A hard Brexit is likely to have a very strong negative effect. This could defer further base rate hikes for the foreseeable future and could even result in monetary easing. This would cause pension liabilities to increase in value and therefore deficits widen to the extent that these liabilities are unhedged.”

“The aggregate buy-out deficit of UK pension funds could increase by almost £220bn in the event of a hard Brexit,” forecasts Rosenberg.

He adds: “A more favourable soft Brexit could result in the aggregate buy-out deficit reducing by around £140bn. Most of these changes will be felt through the impact that falling, in the event of a hard Brexit, or rising, under a soft Brexit, Gilt yields will have on the liabilities.”

In some cases, a sponsor’s covenant could be detrimentally affected by a hard Brexit.

Many UK pension funds invest in funds or trade with banks under European financial regulations. Under a hard Brexit, says Rosenberg: “Some of those investments or banking counterparties may not be available and will need to be replaced with other providers or products. Under some scenarios, this could lead to a lot of trading and portfolio reorganisation with transaction and legal costs.”

He adds: “Avoid being a forced seller of assets. This involves transitioning the portfolio to become more cashflow aware, that is increasing the proportion of contractual assets, such as bonds, which generate the necessary income or maturity payments to meet the necessary cash outflows.

“Maintain sufficient flexibility to allow for unexpected cash calls, such as enhanced transfer values. This allows the assets that are held for growth to be held for the intended period to generate the required returns, such as to maturity for bonds, to avoiding forced selling earlier and at a potentially inopportune time.” 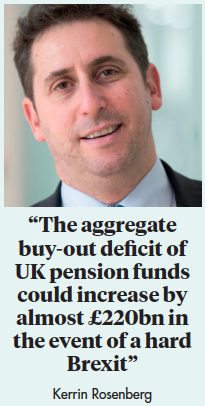 He advises: “Avoid unnecessarily sacrificing yield for certainty. Although government bonds offer the highest certainty of returns to help meet the required cash flows, most schemes require returns in excess of yields offered by government bonds. Investing across a wider array of the investment-grade credit universe can help to increase potential returns without increasing risk significantly.”

But will such behaviour be necessary? Could a slowdown be delayed by a year or two? Rosenberg, UK CEO of Cardano says it is possible: “It will require a reversal in recent trade tensions and/or a reversal in direction from the US fiscal and monetary authorities.”

The only certainty for 2019 is that the outlook is uncertain. It is going to be a bumpy ride.