Negative interest rates were once thought of as a theoretical possibility. After all, why would a lender ever want to lend out CHF100 and accept just CHF99 on a -1% interest rate? But in a world in which central banks have slashed policy rates to a level at or below zero, and where investors are willing to pay governments to provide a safe haven for their excess cash, that flight of fancy is now reality. And one of the places where that reality has bitten hard is the Swiss occupational pension sector.

“Swiss retirement provision is typically built around either final-salary plans or, more commonly, cash-balance plans that convert on retirement into a guaranteed lifetime pension, and which also includes long-term disability and widows benefits,” says Paul Grinnell of consultancy PPC Metrics in Nyon.

The legal framework for second-pillar retirement provision means, he adds, that more or less all Swiss plans are classified as defined benefit (DB) for accounting purposes under International Accounting Standard 19 (IAS 19).

However, one important difference to be aware of when comparing the Swiss accounting approach with IAS 19 is that the Swiss generally assume that an employer has no obligation other than to pay ongoing pension contributions.

So, at least when it comes to active scheme members, a Swiss employer must simply show a liability in its accounts unless it has a specific legal obligation to either the scheme, or to the employees, to make good any underfunding.

In other words, Swiss GAAP contains no requirement to book reserves for interest credit guarantees or the conversion on retirement in the liability calculation. However, where the idea of a liability does become relevant is when a scheme member retires. At this point, their savings pot converts to a lifelong pension in accordance with the scheme’s conversion ratio.

Take this simple example. According to the government, a saver who has accumulated retirement savings of CHF400,000 can expect to receive an annuity of CHF27,200 annually, or CHF2,267 a month assuming a mandatory conversion ratio of 6.8% on minimum savings at retirement age. As for how this translates into the real world, a recent study by PPC Metrics revealed that the average conversion rate across all savings stands at 5.75%.

It is also worth noting that each year the Swiss Federal Council stipulates a minimum level of interest that funds must pay on mandatory retirement provision.

Second, Swiss sponsors use a so-called technical interest rate to discount future benefits. And, as ever, the lower the rate, the more pension capital a scheme requires. Moreover, the BSV – the Swiss social security ministry – stipulates that the technical interest rate must set at a level that can be financed by the return on assets.

So, bearing all that in mind, our challenge is to apply negative or ultra-low interest rates to a Swiss cash-balance plan – rarely a pure DB plan – where the liability is more often than not calculated and subsequently discounted only once a scheme member retires – where the sponsor reports under either Swiss GAAP or IFRS.

Here is what happened. “The effect of negative rates is the same in the pension world as the banking world and equally as strange,” says Adam Casey, head of corporate retirement consulting at Willis Towers Watson in Switzerland.

Indeed, according to Willis Towers Watson, a typical Swiss pension fund had a discount rate of about -0.1% as of August. Casey says: “In the normal historical situation, the time value of money meant that discounting future pension payment obligations to get a present value lower than the sum of the future payments.

“However, in a world of negative rates, the cost of holding money means that we inflate the future pension payment obligations to get a present value that is higher than the sum of the future payments.” In other words, the whole basis for discounting future liabilities to a net present value is tipped on its head. 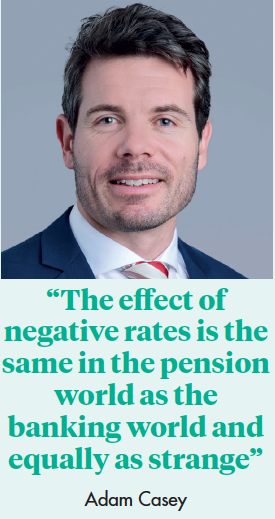 He says: “So the issues Swiss pension funds and their company sponsors face [through IFRS] are just an extension of the same problem they have faced with decreasing bond yields over the last 10-plus years.

And no-one should be left in any doubt over the scale of the challenge Swiss scheme sponsors confront – whether reporting under IFRS or Swiss GAAP. “It is a serious problem. And if rates go further down, the problem will get worse because it makes it difficult with such low rates to finance pensions,” says Heinz Rothacher, chief executive and chairman of Complementa Investment-Controlling. What is more, he adds, the Swiss Chamber of Actuaries is likely to cut the technical interest rate to a new low of 1.75%.

Which begs one question: how can funds respond to the new reality of low investment yields, unremitting credits to saver accounts and punishingly negative discount rates?

In broad terms, the four accounting and investment consultants who spoke to IPE agree that there are two broad responses that Swiss sponsors can make to address the increase in costs and liabilities caused by declines in discount rates:

• Longer term: Revisit the benefit promise through increasing DC provision for higher earners or by limiting the amount of benefit a retiree can draw as a lifelong pension rather than as a lump sum.

It is, says Daniel Tonks, Mercer’s head of retirement services in Switzerland, a non-starter to look to the accounting rules for a fix. “IAS 19 was written at a time when negative rates were not thought to be a likely prospect,” he says. “And so there is broad consensus that, although the outcome is unfortunate, the fact that rates are negative is something we have to live with. The IAS 19 methodology for setting discount rates is prescriptive, and although there is some scope for making adjustments, the impact is generally only a small number of basis points. A more effective solution is to review those assumptions based on management’s best estimate of future experience as opposed to market yields.”

Of course, nothing is ever straightforward. “Where a person has already retired, you cannot reduce their pension once they have started to draw it,” says Rothacher. “This means that the financing has to come from the active members, which is viewed by many as unfair. Your options boil down to managing your coverage ratio and your conversion rate by reviewing the fund’s asset portfolio to improve returns. That said, pension funds could also change the rules so that members pay in for longer – from age 20 instead of 24, say – or work longer and retire later.”