The European Commission (EC) is aware of European pension funds’ “sensitivities” about the introduction of delegated acts into the IORP II directive as part of the EU’s package of sustainable finance measures, an EC official has said.

Speaking on a panel at a Eurosif event in Brussels yesterday, Sven Gentner, head of unit for asset management at the Commission, said he was “very much aware” of the concerns around the EU pension fund directive and delegated acts – even though he admitted “I still don’t fully understand all of this”.

However, he emphasised that the Commission was not pursuing harmonisation between financial sectors when it came to environmental, social and corporate governance (ESG) factors.

“What we want to achieve is that everyone looks at these risks… so I don’t see any contradiction between having Level 2 [delegated acts] and leaving enough room for every industry to do things in the proper way,” he said.

The Council and the European Parliament saw things differently, added Gentner, “but I think this has more to do with past battles than current battles”.

“That’s unfortunate but OK, that’s where we are,” he said. “What we want to achieve is that every industry, every sector, every part of the market looks at these issues.”

He said there also appeared to be a need to clarify what was meant by the phrase ‘looking at these issues’ and what it meant to be able to meaningfully assess ESG risks.

“That’s what we want the ESAs [European Supervisory Authorities] to do,” said Genter. “We don’t want the ESAs to tell the industry ‘you can do this and you can’t do that’.” 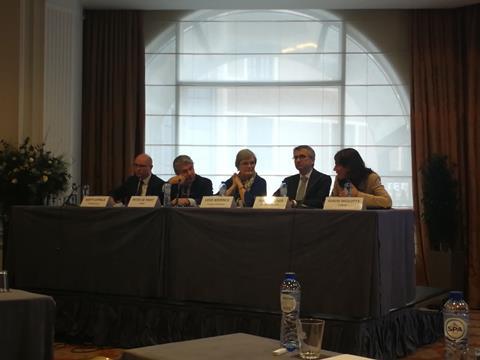 EIOPA and ESMA, two of the ESAs, have been asked by the Commission to deliver technical advice on the integration of sustainability risks.

Gentner was responding to comments made by Matti Leppälä, CEO of PensionsEurope.

The association is against the introduction of delegated acts in the EU pension fund directive because it is worried about the same set of rules being imposed on pension funds as for insurers and asset managers.

In addition, some of PensionEurope’s members were concerned that “opening the risk management issues with delegated acts” could ultimately lead to Solvency II-based requirements being introduced for pension funds, even if this was not the Commission’s intention, said Leppälä.

This has been a major concern for many European pension fund jurisdictions for some time, with PensionsEurope having successfully lobbied for the removal of a delegated acts power from the final IORP II directive when this was in the making a few years ago. Many in the industry continue to be wary that EIOPA could introduce Solvency II-based rules “through the back door”.

Regarding the Commission’s proposal for a sustainability taxonomy, Leppälä said he was happy to hear that this was supposed to be flexible enough to not “lead to pressure or informally or formally forcing pension funds to invest or divest from certain sectors or companies, that it should be up to the pension fund in the end to decide”.

The taxonomy is being developed by a technical expert group and is intended to be a classification system determining what economic activities can and cannot be considered sustainable.

In a position paper published today, PensionsEurope said the taxonomy was an “enabler for integrating ESG factors into investment decisions”, but “not a silver bullet”.

“It does not capture all sustainable investment approaches and therefore should not become synonymous with responsible investing,” it said. “Moreover, pension funds need strong evidence of the taxonomy’s reliability before incorporating it in IORP stress tests or prudential frameworks.”

Gentner said the Commission’s goal was to achieve a redirection of investment but that it wanted to achieve this “through better information and better incentives, not through mandating ‘you can’t do this or you should do that’.”

He acknowledged that “we shouldn’t overdo it”, but also said that “everyone says we need clarity, some standards” and that the Commission was “trying to move the whole economy”.

The final sustainable finance legislation will depend on negotiations between the European Parliament, Council and Commission, which are expected to start early in 2019.