An amendment to IORP II addressing sustainability matters would not have to mean “a major overhaul”, according to the chairman of the European Insurance and Occupational Pensions Authority (EIOPA).

Speaking to journalists at the supervisory authority’s annual conference in Frankfurt, Gabriel Bernardino said that, if EU legislators voted to empower the European Commission to issue rules on sustainability under the IORP II directive, this would not mean “a huge disruptive change”.

It was more a case of “fine-tuning” and including a reference to the need for pension funds – and insurers – to consider environmental, social and corporate governance (ESG) factors in their risk management, he suggested.

It was also meant to ensure that “these elements related to the necessary analysis of risk related to ESG factors should be included in the way that both insurers and pension funds work on a daily basis”, he said.

EIOPA has been asked by the Commission to deliver technical advice on potential amendments to EU rules requiring the integration of sustainability risks in investment decision-making. The mandate relates to the Insurance Distribution Directive and Solvency II, but EIOPA has also been asked to bear in mind that a so-called “delegated act” could be adopted under IORP II. 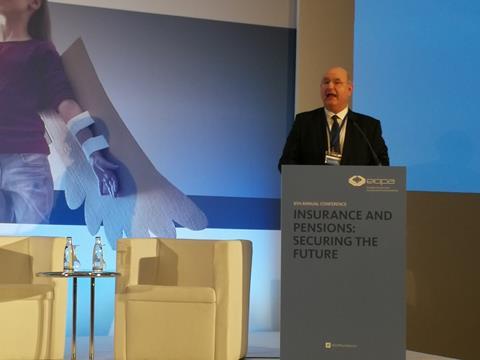 Whether or not the Commission is empowered to make such an amendment depends on the outcome of an EU legislative process related to its sustainable finance action plan. Members of the European Parliament recently narrowly voted against an amendment to remove delegated acts in IORP II from the one of the proposals, retaining the text proposed by the Commission.

However, several member states – France, Germany, the Netherlands and Sweden – have written to the Austrian government, which has the rotating presidency of the EU Council, to ask for the delegated act concept to be deleted.

There is concern in some jurisdictions that amendments made via delegated acts will result in prescriptive rules without any room for national implementation, and that the same set of rules will be issued for both insurers and pension funds.

IORP II includes several new ESG provisions related to areas such as risk management, but it does not require the integration of ESG criteria in investment decisions.