After constructing a plant in India, the buildings materials manufacturer LafargeHolcim opted not to buy efficient water equipment, although the factory was located in an arid zone. Instead, it helped local farmers move from flood irrigation to an alternative known as drip irrigation. This improved water access for both the farmers and the local community, and was the cheaper solution.

While the project makes simple business sense, it nevertheless reflects a certain change of direction for the company in that it considered options perhaps not previously taken into account. The innovation involves the concept of natural capital – the ecosystems underlying a company’s natural resource use. LafargeHolcim is one of 80 members of the Natural Capital Coalition (NCC), a diverse consortium influencing the creation of the Natural Capital Protocol, a management tool that is now under consultation, with a final version due out in June.

The aim is to use natural capital awareness to help guide decisions and assess environmental risk. This means considering the activities and value of the land, water and plants, as well as the ecosystems they embody, in order to improve a company’s notion of risk. “Most businesses have some idea of where they make an environmental impact but few have an idea of their dependencies. The Natural Capital Protocol will help them connect both, which is important,” explains Mark Gough, director of the NCC. The dependencies, he indicates, can be a source of the risk.

However, Gough suggests that they probably might not have considered why they were making the assessments, nor what the point of them might be. “They will probably not have integrated this into the management process,” he says. The protocol is an attempt both to harmonise previous approaches to natural capital, as well as better inform and improve decisions. It aims to link environmental impact data back into management decision-making and direction. LafargeHolcim is one of the companies aiming to use these type of valuations for its decisions.

The protocol thus breaks some new ground in terms of consolidating patches of existing practice among different businesses and making its mark as a concept and management tool in the corporate responsibility portfolio. Coalition members range from Akzo Nobel to Tata Power, and from Burberry to Skanska.

The introduction of the term itself is fairly recent. Its use suggests its potential destination as a balance sheet component alongside financial capital. It might transform existing land asset figures, for example, by incorporating the value of ecosystems services – the ecological activities from which resources originate. These range from photosynthesis to pollination or wetland retention.

However, the protocol does not go nearly that far. “Companies adopting the protocol can opt to report, but they don’t have to,” says Gough. Few have already done so, and even fewer have attempted financial valuations – one of the potential long-term outputs of the natural capital protocol. Among them are two pioneers – the sportswear producer Puma and the Danish pharmaceutical company Novo Nordisk.

In an innovative environmental profit-and-loss account, published in 2014 with the Danish environment ministry, Novo Nordisk valued its water use for 2011 at €34m. Greenhouse gases were estimated at €171m and air pollution at €18m. Each figure was split into the various tiers of the company’s supply chain and own operations. “If environmental costs relating to water consumption, greenhouse gas emissions and air pollution were to be internalised, Novo Nordisk would have to pay €29m in 2011 for operational activities (core activities) alone,” the report said.

Anne Gadegaard, senior global adviser on corporate sustainability at Novo Nordisk, points out the surprises emerging from the exercise. “The process helped look at the company’s generation of its environmental footprint in a completely different way,” she says. The company discovered it had overestimated the activities at its factories. “The biggest effects come from leasing and what we buy from suppliers. Among them, consultancies have a big impact,” says Gadegaard.

Novo Nordisk’s efforts consist partly of an environmental footprint calculation based on corporate outputs. However, they also contain a natural capital component. Its valuation includes estimates of impacts on pollination services and carbon sequestration.

But most corporations do not go that far, reporting only tonnes of polluting gases, for example. Valuations are difficult because of the very character of natural systems, whose boundaries are hard to define and whose categories are not discrete. “In conventional accounting, you know what to include and what to leave out. But you can’t measure natural capital without making subjective judgements,” says the environmental accounting expert, Emeritus Professor Robert Gray of St Andrews University in the UK. 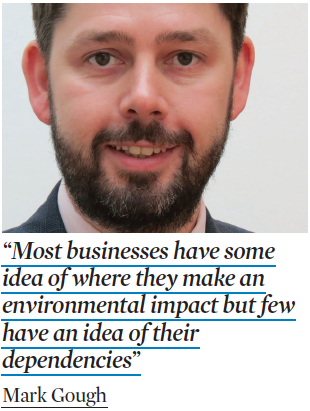 Assessing marginality is one of the natural capital accounting conundrums. Scientific uncertainties shroud ecosystem functioning, making it difficult to assess whether a given change is marginal and when thresholds are being approached or crossed. Many ecosystems do not react to disturbances in a linear way. This means their supply may appear relatively unaffected by increasing disturbance until they reach a cliff edge when a dramatic response occurs. It is not always possible to predict what species will do once their habitat is upset.

Finally, an isolated ecosystem like a lake may play a different role than when part of a lake district. Effects are often uniquely local.

Some techniques have been refined, such as natural capital accounting on carbon emissions. To estimate the impact of glucose in Novo Nordisk’s products, natural capital specialist Trucost calculated the effects of land use change in France. Temperate forest originally grew on the site that supplies Novo Nordisk. Using standardised measurements, Trucost showed the impact on carbon sequestration.

The natural capital measurement tool can only work as a rough guide at best, so the protocol falls short of providing an accounting method. “Natural capital accounting is evolving using better guidance and metrics over time to develop a rule of thumb, as the science isn’t always there to answer the questions,” says Karen Ellis, chief adviser on economics and development at WWF UK, a member of the NCC.

Ellis foresees a number of uses for the protocol and for natural capital accounting. The most obvious might be to assess a closed plant to indicate different remediation methods. Planning authorities could use zoning maps indicating which part of a landscape or river provides the highest ecosystems services.

That analysis could, for example, help determine whether to provide a new habitat for a species upstream or improve a completely different area to protect that same species. “Planning does take habitats into account, for example, and this can be used as a reason to refuse a new property development. But more often it does not. Natural capital assessments embed this thinking more systematically into the process,” Ellis says.

Alternatively, companies might more effectively assess the impact of a potential new site using a kind of stress test incorporating the longer-term natural resource risks of settling there. “It helps businesses better understand the risks of using natural capital in a whole landscape,” says Ellis.

While the tool is initially meant for internal decision-making and investigation, it could evolve. “Ultimately we would like to get to the point where we have a single reporting tool and can make comparisons,” Ellis adds.

If nothing else, the Natural Capital Protocol signifies the recognition by business of the increased risk of greater natural resource scarcity and damage, and the need for plans that better internalise natural impacts. It is an acknowledgement that they must control resource use more consciously. Above all, it helps justify continued activity and wins more public support.