A recent OECD review of corporate governance covered 47 different jurisdictions, hosting 95% of all publicly traded corporations as measured by market value. It says that nearly all have national governance codes and 84% follow a comply-or-explain framework.

The roots of this can be traced back to the 1990s in the UK.

In May 1991, spurred by a lack of investor confidence in the honesty and accountability of listed companies, the Financial Reporting Council (FRC), the London Stock Exchange, and the accountancy profession set up the Committee on Financial Aspects of Corporate Governance.

Chaired by the late Adrian Cadbury, former chairman of confectionary and drinks firm Cadbury Schweppes, the committee was mandated to review corporate governance relating to financial reporting and accountability.

The committee’s final report, dubbed the Cadbury Report, was published in December 1992.

At the heart of its recommendations was a code of best practice. 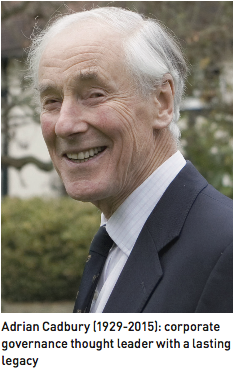 The London Stock Exchange was to make it a requirement for companies, as an obligation of listing, to state whether they were complying with the code and give reasons for any non-compliance.

According to the Cadbury report, the committee felt “a voluntary code coupled with disclosure” would be more effective than a statutory code.

“It is directed at establishing best practice, at encouraging pressure from shareholders to hasten its widespread adoption, and at allowing some flexibility in implementation,” the committee wrote.

Hans Hirt, head of EOS, Hermes Investment Management, says: “The Cadbury Code has been hugely influential around the world in shaping the substance and nature of corporate governance regulation.

“Its principles around independent directors and their role within a board as well as the underlying ‘comply-or-explain’ approach are bedrocks of modern corporate governance [in the UK] and in many markets around the world.”

The Cadbury Report is said to have represented the first time that the now familiar concept of comply-or-explain was used.

Chris Hodge, former strategy director at the FRC and now policy adviser to ICSA: The Governance Institute, says the comply-or-explain approach has spread across the world,  even embedded in EU legislation as a concept.

“The effectiveness of the approach can vary from country to country, depending on the typical [corporate] ownership structure, but as a concept I think it’s one that has really taken off,” he says.

Kerrie Waring, executive director of the International Corporate Governance Network (ICGN), and a friend of Cadbury, says the comply-or-explain concept was the report’s master stroke.

She says it was key to the Cadbury code being accepted by corporates, allowing them to explain any deviations. The counterpart was that it was up to investors to judge these explanations.

The global proliferation of corporate governance codes also has a little something to do with Cadbury’s professional journey after his work on the Cadbury Report.

These, the OECD says, have become “an international benchmark for policy makers, investors, corporations and other stakeholders worldwide”.

Waring says the development of stewardship codes is talked about as if a new concept, but the idea that investors should use their ownership rights responsibly and engage with boards was included in the Cadbury Report.

It drew attention to guidance from what was then the UK’s Institutional Shareholders’ Committee.

Principles about investor stewardship were not included in the Cadbury Code, but did make it into subsequent UK corporate governance codes.

They were fairly explicit by the time of the 1998 Combined Code on corporate governance, which included a section applying to institutional shareholders.

In 2010, however, investor stewardship principles were spun off into a separate Stewardship Code, and the Combined Code was revised and renamed the UK Corporate Governance Code.

Other countries have introduced stewardship codes since, such as Japan in 2014.

Hodge was involved in introducing the Stewardship Code in the UK. He says it evolved because the corporate governance code did not come with a mechanism to incentivise or make investors comply with the provisions concerning their responsibilities, and because of changes in company ownership.

“There were a number of conditions in place in 1992 that made the [Cadbury] committee think comply-or-explain would work, and one of those was that there was a critical mass of investors who had an interest in engaging with companies,” he says.

The 1992 Cadbury report itself noted that, in a reversal on 30 years earlier, institutional shareholders dominated the ownership of UK listed companies.

By 2007 however, says Hodge, UK pension funds and insurance companies held around 15%.

“One of the reasons the Stewardship Code was introduced was to try to rebuild that critical mass, to try and reinforce the comply-or-explain approach.”

As illustrated by the comments above, many see the Cadbury Report as a seminal piece of corporate governance regulation.

Many are not. There is anger over executive pay and interest groups complain that boards prioritise shareholders relative to other stakeholders.

Hodge has cautioned against seeing this as a failure of the comply-or-explain and code-based approaches to corporate governance and stewardship. “In 25 years, the purpose of corporate governance has gone from being ‘improving oversight’ to ‘saving capitalism’,” he wrote earlier this year.

As far as the original purpose, the approach advocated by the Cadbury committee is still suitable, he argued. It is mostly not, however, capable of delivering on the latter.