Integrating ESG has become commonplace in institutional investment, but generally the discussion has focused on areas such as security selection and stewardship.

Relatively little attention has been paid to ESG considerations at the level of strategic asset allocation (SAA), which is often described as a bedrock of institutional portfolios.

This is beginning to change. The Principles for Responsible Investment (PRI) published a discussion paper about responsible investment and SAA in August and held a workshop on the topic in The Hague in November. It intends to follow up on this work with a guidance document in 2020. The Institutional Investors Group on Climate Change has a working group on ‘Paris-aligned’ strategic asset allocation, while individuals such as Craig Mackenzie, head of strategic asset allocation at Aberdeen Standard Investments, have been promoting the topic.

Mackenzie describes SAA as being about “forming views of the long-term returns available from different asset classes and then building portfolios with the best expected risk-adjusted returns, subject to various constraints”.

By way of a general overview, he sees two core themes, each “somewhat different in flavour”, when it comes to incorporating factors such as climate change in the SSA process.

The first broad category, according to Mackenzie, involves considering climate risks and opportunities when forming views about long-term returns for asset classes, with climate scenarios being essential for this work. The PRI, for example, is pushing the view that there will be an “inevitable policy response” to climate change, and last month released the results of its modelling of the impact on equity markets: a net $1.6trn (€1.4trn), or 3.1%, hit to the valuation of companies in the MSCI ACWI, with significant variations in financial upside and downside between and within sectors.

Another responsible investment approach to SAA, according to Mackenzie, is a sort of “impact investing parallel”. “You’re using the apparatus of strategic asset allocation, but rather than just achieving risk-return goals you’re also maximising some kind of social or environmental objective,” he says.

In its discussion paper, the PRI says “reviewing the opportunity set”, by reviewing definitions of regions, sectors, asset classes and sub-asset classes, could be another way in which ESG factors could be embedded into SAA frameworks.

Closing the gap
According to the PRI’s discussion paper, there is “a gap between asset owners’ aspirations regarding the integration of ESG factors, including climate change, and the sustainable development goals (SDGs), into investment processes and the way in which SAA and capital allocation decisions are made”.

IPE asked APG and PGGM, which have allocations to investments targeting environmental and/or social impact, if they made these as part of or outside the SAA decision-making process, and if they have integrated climate scenario risk in an SAA context.

APG’s short answer to the first question is no. A spokesman elaborates by explaining that its approach to impact investing is through sustainable development investments (SDIs), and that its SDI approach is applied in portfolio construction after the SAA stage.

“In SAA we do, however, analyse to what extent each asset class can contribute to the different components of our responsible investment policy, including SDIs,” he adds.

As to the question about integrating climate scenario risk, he says: “In our SAA-process we use both stochastic scenarios and deterministic scenarios.

“With the latter we try to capture structural changes in the economy. We have a special climate change scenario in which both physical and transition risk play an important role.

“It is modelled as a supply shock to the economy and we have translated that macro environment into return expectations. Deterministic scenarios are used to make sure the portfolio is robust to various plausible environments, but there are no probabilities assigned to them.”

Liza Jansen, investment strategist at PGGM, says the Dutch pension investor has considered taking climate change into account in the asset-liability management (ALM) or SAA process, but concluded that it preferred a bottom-up approach to integrating financial climate risks in the investment process.

One of the reasons for its conclusion has to do with the amount of uncertainty surrounding climate change and its impact.

“To integrate climate change in ALM, we have to translate the impact of climate change on economic growth, but economists do not yet agree on this impact,” says Jansen. “Furthermore, this impact has to be translated to impact on returns. There is a lot of uncertainty about how climate change will evolve.

This will introduce a lot of model uncertainty.” CPEG, the CHF13.7 (€12.6bn) pension fund for the canton of Geneva in Switzerland, claims a first among pension funds by having enriched its ALM study with a carbon footprint measure of proposed asset allocations. 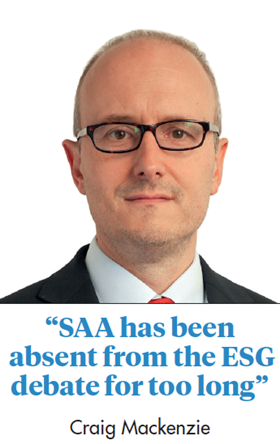 “The board could choose the asset allocation in terms of return, risk and carbon footprint objectives,” says Grégoire Haenni, CPEG’s chief investment officer, at IPE’s annual conference in Copenhagen last month. “The strategic asset allocation that was selected had the lowest possible footprint.”

The analysis was done with the help of Lombard Odier, and CPEG’s intention is to carry out a carbon footprint-inclusive ALM study every year, said Haenni.

The individuals and organisations that are seeking to bump SAA up the responsible investment agenda are not out to harangue investors for the standard of practice in this area so far. Instead, there is recognition that embedding factors such as climate change into SAA represents a new frontier for responsible investment, and that experiences and insights need to be shared.

In a blog post about the workshop that the PRI hosted in November, Toby Belsom, director of investment practices at the organisation, said the 15 asset allocators that had attended had “clearly grappled with the challenges posed by changing technology, regulation, demography and climate”.

“We cannot claim to have found a clear way forward – and maybe there is not one clear answer.” Continuing to search for answers and apply the lessons learnt could have important benefits, however.

As ASI’s Mackenzie told delegates at the PRI’s annual conference in Paris last year, SAA is “the place to start” to help plug the climate finance gap.

“A couple trillion dollars a year needs to be allocated, but in percentage terms that’s not a seismic increase relative to total portfolios,” he said. “You can shift big amounts of money in strategic asset allocation, it’s where mandates are specified and it’s a fiduciary process.

“SAA has been absent from the ESG debate for too long.”