According to the Commission, whereas the package of 2018 action plan measures focused on the financial sector, “the renewed strategy will shift the focus to the real economy and corporates, as well as to public authorities and citizens to give everyone the necessary tools to transition from brown to green”.

Speaking on a webinar organised by the Principles for Responsible Investment (PRI) last month, Martin Spolc, head of the sustainable finance unit at the Commission, said the new strategy would focus more on “financing green”, as distinct from “greening finance”.

“We will cover both in the renewed strategy, but so far we have not yet done enough on corporates as well as mobilising citizens, and related to that, also public authority spending,” he said.

In developing the measures proposed under its 2018 action plan, the Commission has been advised by a body known as the technical expert group (TEG), the composition of which has not been to everyone’s liking. The TEG’s mandate ends in September, and by the end of June the Commission was planning to have launched a call for expressions of interest to join a new body, the Platform on Sustainable Finance.

The creation of this group is foreseen by the so-called taxonomy regulation, which at the time of writing was supposedly due to shortly be approved by the European Parliament. By the time this edition of IPE magazine is published the Commission is due to have launched a call for expressions of interest to join the platform.

It is supposed to advise the Commission on the technical criteria for screening economic activities in relation to four further environmental objectives as part of the taxonomy framework, as well as on “other issues relevant to sustainable finance”. Spolc said the group would include representatives not only from the financial sector, but also business, and contain sectoral expertise. 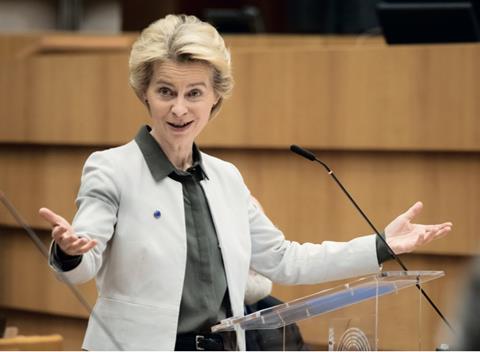 The Commission is due to adopt its new sustainable finance strategy by the end of this year. A wide-ranging consultation to inform the development of the strategy was launched in April and runs until 15 July.

The new strategy is supposed to play a key role in the realisation of the Commission’s Green Deal, which predates the coronavirus outbreak, but the EU executive is sticking with for the targeted recovery from the economic fallout of the pandemic.

According to Spolc, the Commission is thinking about the new sustainable finance strategy in terms of three clusters.

One of them is to “strengthen the foundations for sustainable investment”. Spolc says “the key piece is transparency, especially by corporates”, with the Commission planning to table a legislative proposal in the first quarter of 2021 to make changes to the EU Non-Financial Reporting Directive (NFRD).

Alignment at last?
Subject to the detail of those changes, this should be welcome news for investors. This is because the legislation that is emerging on the basis of the 2018 action plan imposes new reporting requirements on investors such as asset managers and pension funds.

In brief, the new regulations are the climate benchmarks regulation, the taxonomy regulation, and the Sustainable Finance Disclosure Regulation (SFDR).

The regime regarding the climate benchmarks regulation is the furthest along, with the final supporting technical measures due to be adopted by the Commission at the end of June. This commences a three-month scrutiny period by co-legislators. It means that the official publication of the so-called delegated acts can be expected for October.

It is the disclosure and taxonomy regulations that introduce the new sustainability disclosure regime for investors (issuers are also affected, although they have not been the focus). The nitty gritty of the disclosures is the subject of a consultation by the European Supervisory Authorities (ESAs) until the beginning of September.

Industry groups such as PensionsEurope and the European Fund and Asset Management Association maintain there is a problem. Without changes to the availability and quality of non-financial data on investees, investors  would not be able to deliver what was being asked of them. That is in the context of the sustainable finance action plan.

The groups have been arguing this point for some time but their concerns are spelt out clearly in their submissions to a consultation on the review of the NFRD.

PensionsEurope, for example, says the current NFRD was not aligned with the new reporting requirements of the SFDR and taxonomy regulation “in at least four ways”.

One of these is with regard to a requirement in the SFDR for the publication of a due diligence policy regarding the adverse impact of investment decisions on environmental, social and other sustainability matters.

PensionsEurope writes that the mandatory indicators proposed in the ESA’s consultation for this disclosure should be reported by companies. They should be stored in a central European database, because “otherwise, reporting against these indicators would be (a) virtually impossible and (b) very expensive for pension funds”.

Although the review of the NFRD holds out the prospect of a more coherent regulatory regime from the investor perspective, investor groups may still be disappointed with regard to a timing gap they have been bemoaning.

During the PRI webinar, Spolc said the Commission would not heed some calls for the SFDR application date to be delayed. It is due to apply from March 2021, with groups like PensionsEurope and the buy-side body of the International Capital Market Association pointing out that this pre-empts the NFRD review.