These are good times for fossil fuel investors. For long-only players, the strategy has worked as the recovery from lockdown began. For some hedge funds, success has been in evidence much longer. Over three years, HFR’s Basic Materials/Energy equity hedge index is streets ahead of any other strategy composite, having returned more than 20% to the end of March.

Yet the opacity of hedge funds has long been difficult for some institutional investors to stomach. Today it comes with the extra twist that asset managers and owners are being quizzed on the sustainability of their portfolios. If you are effectively a trading strategy that turns over the entire portfolio several times a year, relating to responsible stewardship becomes a challenge.

That challenge is coming to light for hedge funds and their clients given the recent appreciation of hydrocarbons. As one fiduciary manager admits, despite being a member of the Institutional Investment Group on Climate Change and having announced a Net-Zero Carbon policy, “we don’t have a lot of [carbon] data available on our diversifying strategies”.

The dilemma is having a long-term policy aligned with recognised sustainability standards while the emissions exposure from some of the most successful current sources of returns remains obscure.

The fiduciary manager mentioned above is parking the problem by beginning the journey of reporting greenhouse gas emissions in its long-only equities portfolio. For some hedge funds, the problem may be closer to hand and harder to park.

On 6 April, the European Commission published its long-awaited level-2 regulatory technical standards (RTS) for the Sustainable Finance Disclosure Regulations (SFDR). These are the rules intended to direct European investments towards sustainable economic activities.

Section 33 of the latest guidance bans all derivatives from inclusion in funds’ reports on their level of exposure to sustainable economic activities. Derivatives must, however, be included in total economic exposure.

Hedge funds not intending to carry a green label in the EU will be unfazed by this requirement, which effectively says derivatives are not sustainable investments. There are other less prescriptive jurisdictions. Switzerland, for example, has no explicit legal basis for disclosure of climate indicators even in long-only portfolios.

But that is all cold comfort to hedge funds or absolute return managers with substantial assets under management from EU pension schemes keen to evidence their ESG credentials.

Speaking to IPE before the publication of the Level 2 RTS, Adam Jacobs-Dean, global head of markets, governance and regulation at the Alternative Investment Managers Association (AIMA) described the previous lack of regulatory guidance on the role of derivatives in ESG as a “glaring absence”.

He said at the time: “Derivatives and techniques such as short selling are a differentiator for AIMA members. They give us an edge over other types of investor.”

The new regulations – which come into force next January – appear to banish that edge from the EU’s realm of reportable sustainable strategies. That is an irony for some hedge funds whose rationale is to create a carbon hedge by going short ‘brown’ stocks and long ‘green’ stocks. The rationale here is to put clients’ capital to work against the heaviest emitters.

There is controversy about how effective such shorting can be. Some investment managers, including AQR and Man Group, have opined publicly on whether shorting can send an effective signal not just to management but also to the market, ultimately raising the cost of capital for those companies. This may be seen as a just manifestation of carbon risks on big emitters. 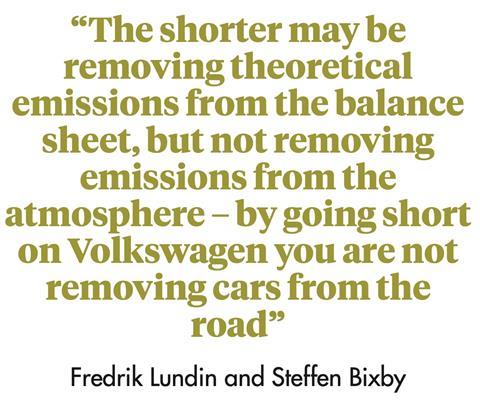 So why would the European Commission effectively deny such strategies the chance to label themselves sustainable? One concern may regard the accounting of emissions in a carbon hedge. Taken to an extreme conclusion, an investor that shorts the worst emitters and goes long the greenest could report a net-zero position within a matter of days. Such instant decarbonisation strategies exist.

Finreon, based in St Gallen, Switzerland, claims to be able to use a carbon hedge overlay in any portfolio of securities, passive or active, with minimal interference with the underlying portfolio management. Hamburg-based Alpha Centauri has a Climate Smart Long-Short strategy that neutralises market beta while reporting net-negative emissions (see box).

At a time when most institutions are mapping out a path to net-zero over decades, neither Finreon nor Alpha Centauri pretends that the strategy is a magic solution. There is a disclaimer on the Finreon website that distinguishes the use of shorting as a signal to management from the actual reduction of that company’s emissions: “Investor influence on company decision-making is not to be mistaken with real world impact.”

This is in keeping with common thinking on what shorting does, and importantly, how various parties involved in a short transaction report their carbon position. In a recent paper, Fredrik Lundin and Steffen Bixby of ISS  argue that, from a risk perspective, the short-seller should report net emissions while both entity A, from which the stock was lent, and entity C, which subsequently buys from the short-seller, should both report positive emissions (see figure).

Measuring the impact of short selling

Christian Vial, head of innovation and research at Finreon, nevertheless emphasises the influence that shorting has on company management. If shorting increases the cost of capital for recalcitrant polluters, then that is arguably a real-world effect. The question – and possibly seed of the European Commission’s doubt about reporting derivatives’ role in sustainability – is how to measure such signals. It is hard for any third party to quantify signals sent by the activities of short sellers. Databases exist but they are expensive and typically only bought by absolute return managers.

Exchanges have a minimum size for reporting but in the EU, public disclosure need only occur when one entity shorts 0.5% of a company. Otherwise, clients of such strategies rely on reporting by the hedge fund itself, and this varies.

There is an irony with regard to effecting corporate change by other means. Lundin and Bixby note that of all the parties involved in a shorting trade, only entity C is entitled to vote and exert control by this means.

It is possible for the stocklender, entity A, to insert a recall option, for example in case of emergency corporate activity. But Tom Powdrill, head of stewardship at engagement specialist PIRC, says this practice comes at a cost. His worry is that shareholders might find their stocklending practices in conflict with their voting power. In other words, stocks loaned to effect a short signal that a company’s carbon risks were underestimated, could weaken a similar signal being exerted by voting rights.

This is not a small problem: there is evidence of up to 20% of some companies’ stock being lent out around dividend dates. A notable example occurred just before BP’s AGM in 2017, triggering a huge drop in voting turnout – to just 51% (the year before turnout was 67%; the year after it was 69%).

Some companies have helped identify these conditions by reporting shareholders’ held and lent shares. But it would take much greater disclosure to recognise exactly who holds what securities and for how long when dealing with shorting.

The carbon hedging strategies applied by Finreon and Alpha Centauri both use total return swaps. Vial says the idea originally was to use single stocks but a swaps wrapper is more convenient. Investment banks typically create such swaps and lay off the positions with other investors.

That creates a longer chain of actors in carbon hedging than illustrations of the process usually show – which is just three: original holder (A); shorter (B); and subsequent buyer (C), as the figure shows. In an ideal world, every ‘long’ holder in the chain would report for the duration of their holding, but this does not happen in the real world. The quicksilver speed of trading by certain hedge funds, as well as the standard use of broad-exposure instruments such as index futures and total return swaps, may partly explain why.

The rapid rate of turnover in many hedge funds, and their need for derivatives to obtain and trade exposures, has helped achieve great performance in recent market conditions. But in the eyes of the European Commission, it now makes them awkward candidates for sustainability status.

Like so many other pioneers, Alpha Centauri’s efforts to profit from decarbonisation began with a challenge from outside the organisation. The Hamburg-based boutique was approached by South Pole’s Climate Solutions Team (since acquired by ISS) in 2016 with a request to make carbon data a meaningful aspect in investment strategies. “We had no idea what the outcome might look like,” recalls Ulf Füllgraf, managing director at Alpha Centauri. 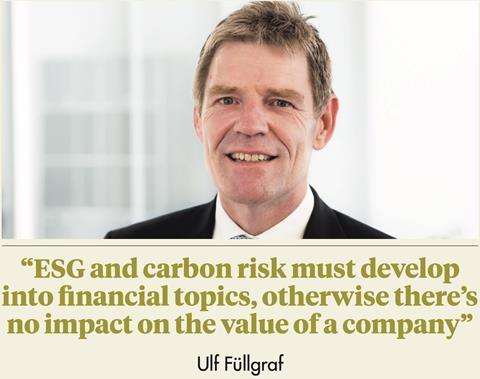 With understanding, that evolved into key questions: “Is climate risk already priced in equity markets, either as a performance or a risk factor; and does shorting make sense?” Alpha Centauri evaluated the questions along its existing factor investing process and found, that these questions could be answered positively.

The most successful fund is a European equity Climate Smart Long/Short strategy, which has been live since 2017. With minimal exposure to market risk factors, the strategy exploits companies’ carbon data (supplied by ISS) based on Scope 1 and 2 emissions in combination with four well-known equity factors. “Scope 3 is too complicated right now,” according to Füllgraf.

On definitions, he finds the term ‘non-financial’ misleading. “ESG and carbon risk must develop into financial topics, otherwise there’s no impact on the value of a company,” he says. Alpha Centauri has profited from shorting heavy emitters and going long greener stocks.

But while the economic exposure to carbon is negative, it is noteworthy that the strategy is neutral on broader ESG ratings. For Füllgraf, that is evidence of sound management of unintended risk factors. The strategy was never devised with reference to ESG criteria other than carbon. But it is a reminder that as sustainable investing develops, so asset owners will be able to – and may have to – specify more clearly which risks they want managers to target.